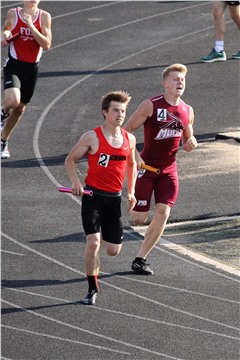 The Jackson boys and girls track teams qualified for the Class 5 Sectional 1 Meet in a combined 21 events at this year’s Class 5 District 1 Meet on Saturday at Oakville.

The boys took second place with 137 points behind district champion Poplar Bluff (155) while the girls placed third at 91 behind champion Linbergh and runner-up Northwest.

“It was a really long, hot day, and because we have had such a cool spring, the athletes aren’t acclimated to that yet, and so we knew it was going to be tough,” Jackson head coach Jim Stoverink said. “I was extremely proud of how our athletes dealt with the conditions and really demonstrated some incredibly gutsy performances.

“Ean [Buffington], Donya [Marx], Caleb [Craft] and Aaron [Brown] did this not only by turning in great performances, but simply by the number of times they had to compete in the heat.”

Jackson’s boys were able to place in the top four in 14 events as the team won five all together.

The 4×400 team made up by sophomore Caleb Craft, Buffington, sophomore Donya Marx and sophomore Aaron Brown won the race with a time of 3:30.37.

Brown was the victor of the 400-meter dash, as well, by crossing the finish line at 50.01, which was a second faster than the runner up.

Brown also qualified for sectionals in the 200-meter dash, where he placed third overall with a time of 22.74, .52 seconds behind first.

Marx set the school record in high jump with a leap of six foot, six inches, a mark that placed him second in the event to qualify for sectionals. He also qualified for sectionals as the anchor for the 4×100 team that took third place along with freshman Dimechi Herring, sophomore Dalton Skrob and freshman Daniel Dickerson.

The last event won by the Jackson boys was the pole vault, which junior Jackson Rinehart remains undefeated in this season. He won the event with a jump of 14 to advance to sectionals.

The girls team qualified for this year’s sectional meet in a total of seven events and finished with just one district champion.

Senior Katie Schumer added to her trophy case by winning the pole vault event with a jump of 11-6 as sophomore Erin Huff finished behind her in second with a mark of 10.

Jackson’s girls had two more second-place finishes as junior Kennedy Bauer was the runner up in the 1600 with a time of 5:25.75. She finished 1.51 seconds behind Lindbergh junior Abigail Juedemann.

Wilson was also one of the three third-place finishers as she qualified for sectionals in the 800 with a time of 2:27.71. Sadler was only .41 seconds from earning a spot in the top four as she was interfered with coming down the home stretch.

“Unfortunately, the officials didn’t see it, and so she just missed qualifying for Sectionals,” Coach Stoverink said. “She was understandably upset by this, but she had to come back just a short time later to run the 4×400 relay. She did a terrific job of composing herself, got her mind right, and ran one of our best legs on that relay.”

Also placing third for the girls team to qualify for sectionals was senior Lauryn Varner in high jump (5-0) and freshman Allison Akers in the javelin (95-8).

Senior Julia Kidwell was the final sectional qualifier for the girls team in the 3200, where she took fourth place with a 11:58.12 finish.