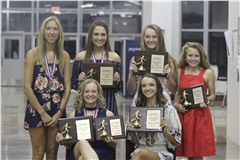 The Jackson track and field program celebrated this season during its annual award banquet last week on June 4.

Both the boys and girls had plenty to celebrate about since three athletes from each team garnered Class 5 All-State honors.

One of them was senior pole vaulter Katie Schumer, who became the second athlete in program history to earn all-state honors in one event four times. She also became a four-time SEMO Conference and Class 5 District 1 Champion this season.

Schumer was given the Outstanding Field Athlete award while also being recognized as one of the team’s top-five scorers.

Earning all-state honors along with Schumer in pole vault was sophomore Erin Huff, who actually tied with Schumer for fourth place in the event. This was Huff’s first all-state finish.

The final all-state finisher for the girls team was junior Kaylee Wilson, who took eighth place in the 800-meter run at state. She was honored with the Outstanding Track Athlete award, Most Inspirational and was the top scorer.

This is the second time Wilson has earned all-state honors, the first time being in 2016 as a member of the 4×800-relay team that took fourth place.

Also being recognized for the girls team was junior Kennedy Bauer, who also received the Outstanding Track Athlete award. Bauer qualified for state in the 1600 where she placed 13th.

She also won two conference championships in the 1600 and 3200 this year.

Senior Abby Sadler, who was a part of the 4×800 conference championship team with Motes and Wilson this season, was also recognized as a top-five scorer.

The boys team was without an all-state finisher in 2017, but senior Ean Buffington, junior Jackson Rinehart and sophomore Aaron Brown were able to end the one-year hiatus.

Buffington, who finishes his career at Jackson as a two-time all-state finisher, competed in both the 1600 and 3200-meter run at state. He took third in the 1600 while finishing ninth in 3200, just one spot away from another podium finish.

Buffington’s first all-state honors came in 2015 as a member of the 4×800-relay team, which took third place.

Buffington was given the Outstanding Track Athlete and Team Captain award while also being recognized as the team’s top scorer.

Rinehart, who won his first conference and district championship this season, finished seventh overall in pole vault in his first trip at state.

He was undefeated heading into the state meet, which helped lead him to earning the team’s Outstanding Field Athlete award.

Brown became the first athlete on the boys team to place at state in the 400-meter dash in six years by taking fifth overall. This was Brown’s first trip to state, and he also became the first boys runner for Jackson to win a conference and district title in the event since 2013.

Senior thrower Owen Leible was the fourth and final state qualifier for the boys team. He took 15th place in shot put.

Marx won conference championships in both the high jump and triple jump while also being a member of the 4×400 district title team along with Buffington, Brown and Craft.