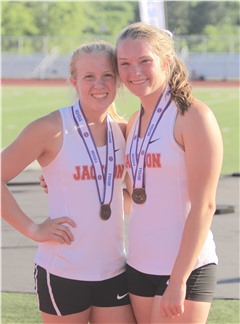 The Jackson track and field program had a total of eight athletes compete at this year’s Class 5 State Meet on May 25 and 26 in Jefferson City.

None of these athletes came away with a state title, but six of them did manage to earn all-state honors.

“I thought we competed really well — I’m super pleased about having six out of our eight athletes come back as all-state,” Jackson head coach Jim Stoverink said. “Especially six individuals because if you have a relay team make all-state there’s four kids right there. I don’t know since I’ve been with the program if we’ve ever had this many individual all-state performances.”

One of the six athletes to do so became just the second Indian ever to earn all-state in the same event four times.

This was senior Katie Schumer, who took fourth in pole vault with a jump of 11 feet to become a four-time all-state honoree.

“Well, we are just super proud of the entire body of work that Katie has put together throughout her high-school career,” Stoverink said. “She placed at the Kansas Relays three times and earned all-state by finishing in the top five at state all four years in the same event. We didn’t quite finish as well as we would’ve liked because that was kind of our goal was a state title.

“I know she was really disappointed in how she finished — she’s gone higher than [11 feet] in every meet this year.”

Schumer dealt with an obstacle over the weekend since one of her poles snapped in two before the event started.

“It was really the pole she would’ve normally been vaulting at 11-6,” Stoverink said. “You get a little adversity in a high-pressure situation like the state championships — it makes it a lot tougher.”

Her personal record jump is 12-6, which Springfield Central senior Elaina Roeder cleared with a 12-7 to claim this year’s title.

Fellow pole vaulter sophomore Erin Huff tied Schumer for fourth place with a leap of 11 feet to earn her all-state for the first time in her career.

In the same event on the boys side, junior pole vaulter Jackson Rinehart headed into the state meet undefeated with conference, district and sectional gold medals in his trophy case.

Rinehart’s undefeated season came to an end at state as he took seventh place with a jump of 14-9 to earn his first state medal.

“We were pleased with that [finish],” Stoverink said. “We would’ve maybe liked to have seen him vault just a little bit higher, but that was our goal at the beginning of the season for him was to get on the podium at state.

“He was undefeated going into this meet, but we knew the competition level was going to be much tougher than what we had seen all year.”

Claiming the state championship in the event was Lee’s Summit senior KC Lightfoot, who recorded a vault of 18 feet, which was 3 feet, 3 inches better than the runner up. His vault broke the state record for every Class.

The final three all-staters for Jackson came on the track as senior Ean Buffington, junior Kaylee Wilson and sophomore Aaron Brown each placed in the top eight of their respective events.

“We were really proud the way he came back in the 1600 in the second day,” Stoverink said. “… [Buffington] ran a great race that was a little bit strange in how he ran it. He really slowed down in his second lap for some reason, but he really brought it home in his third and fourth lap.

Buffington was only one spot away from claiming all-state in the 3200 as well by placing ninth overall, crossing the finish line at 9:49.58.

Before suffering an injury, Wilson helped lead the girls cross country team to its first-ever state championship. Wilson did so by being the team’s only all-state finisher as she came in at 17th place.

In Brown’s first trip to state, he was able to qualify for the finals in the 400-meter dash by placing seventh in the prelims with a time of 50.15.

By qualifying for the finals, Brown guaranteed himself a finish in the top eight to earn all-state honors, but Coach Stoverink said Brown wasn’t satisfied with just that.

Brown took fifth place in the finals with a faster time of 50.12.

“As long as you don’t false start or anything you know you’re all-state,” Stoverink said. “Aaron could’ve easily run a nice, easy race and not make it hurt too bad and he’s going to be seventh or eighth and get his all-state medal. He wanted as high up on that podium as he could get, so I was really proud to see him come back on the second day and throw down an even faster time.”

The two athletes who failed to earn all-state honors was senior Owen Leible in shot put (15th) and junior Kennedy Bauer in the 1600 (13th).