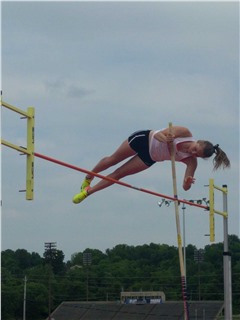 At the Class 5 State Track and Field Championship meet May 26-28 held in Jefferson City, two members of the Jackson track and field program were able to end their season on the podium.

The two were senior Nicole Humphreys and junior Katie Schumer of Jackson’s girls team, who both had already earned All-State honors before this season.

This was Schumer’s third trip to the podium in the pole vault event as she finished third with a jump of 11 feet, six inches to earn her highest place ever at state. Schumer placed fifth in her freshman and sophomore season with marks of 10-6 and 10-9 respectively.

“Katie Schumer just continues to be solid and consistent in the pole vault,” head coach James Stoverink said. “I mean this is her third year in-a-row as a junior being All-State, so to finish in the top five three times and still having a senior year to go is just phenomenal.

“There are not very many athletes that earn All-State honors all four years [of high school], so that’s a huge accomplishment for her.”

Finishing in front of Schumer to take the top-two places were seniors, and Coach Stoverink believes her goal for her senior season is to finish as a state champion.

“She was really close to it this year. If she clears one more height, she’s probably the state champion this year,” Coach Stoverink said. “I think anything short of that next year is going to be a little bit of a let down for her.

“I think she’s going to come back with that confidence and that same work ethic and attitude, and she’s somebody that trains all year for it, too. We expect big things out of her next year.”

Coach Stoverink said one of the things he has been the most impressed with about Schumer is her growth.

“One of the biggest things with Katie is she’s gotten more confidence. I mean she’s an extremely hard worker, very dedicated, very coachable — just a great athlete to work with,” he said. “I think especially as a freshman she was kind of quiet, kind of in her little shell. … One of the things I’ve seen is she’s come out of that shell and become more of a leader with that pole vaulting group, and she is just more confident in herself.”

Humphreys did not qualify for state in her freshman season, but earned All-State honors as a sophomore in the shot put event with a throw of 39 feet, two inches to place fourth overall.

Humphreys qualified in both shot put and discus last year as a junior, but failed to get to the podium.
This year in her final state meet, though, Humphreys placed sixth in discus with a 120-foot, four-inch throw to earn All-State honors for the second and final time.

“I thought Nicole ended her high school track and field career very well,” Coach Stoverink said. “I know she would’ve liked to have made the podium in the shot put like she did her sophomore year, but getting on the podium in the discus — that was a huge accomplishment. In both events she finished higher than what she was seeded, so we were really happy with that.”

Humphreys will now take her talents to Southeast Missouri State where Coach Stoverink believes she will continue to do great things.