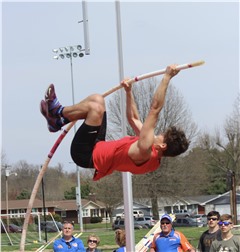 (This article has been updated from the print version.)

After sweeping the SEMO Conference, the Jackson boys and girls track and field teams continued their success at this year’s Class 5 District 1 Meet. The boys team finished first overall to take home the district championship, while the girls placed third as 27 Indians qualified for sectionals.

The meet was divided into two days due to inclement weather, which forced the field events to be pushed to Monday as the track events were held Saturday.

The Indians took home a total of six individual/relay team district championships in the track events as the girls team won four of these titles.

Bauer placed second behind Wilson in the same race with a time of 2:27.75 to qualify for sectionals. Bauer also won her first individual district title by placing first overall in the 1600 as she crossed the finish line at 5:19.57.

Bauer and Wilson were also able to help lead the 4×800-relay team to win a district title, which was also comprised of junior Ashlyn Prince and freshman Layla Fliege. The team won the race with a time of 10:11.43, and this was 13.62 seconds ahead of second place.

The 4×400-relay team made up by Bauer, Wilson, Prince and sophomore Alexis Boyles placed second overall with a time of 4:18.07 behind first-place Lebanon (4:14.94) to qualify for the sectional meet.

The final district champion for the Jackson girls was freshman sensation Ryleigh Kilhafner, who won the 100-meter dash at 13.07. The runner-up in the race posted a time of 13.26.

Brown also qualified for sectionals in the 200-meter dash, where he placed second with a time of 23.28.

Brown along with fellow juniors Caleb Craft, Donya Marx and sophomore Daniel Dickerson combined for a time of 3:28.39 in the 4×400 to place first and advance to sectionals.

The boys 4×800 team placed fourth overall with a time of 8:32.49 to qualify for sectionals, which is a team made up by juniors Jeremy Brown, Michael Schneider, Ethan Walz and sophomore Evan Stephens.

Two more athletes from the Jackson boys team qualified for sectionals, which came in the 3200 as junior Luke Wendel took third place followed by senior Scout Pettit in fourth.

Wendel finished the race with a time of 9:57.07 to continue his season, and Pettit, who was hit by a car traveling 30 miles per hour while running before the season, had the finish of a lifetime to move on to sectionals.

“He was able to create a bit of a gap, but with two laps left the runner in sixth made a strong move into fifth,” Head coach Jim Stoverink said. “The runner caught Scout with 200 meters to go, and he made a strong move to pass him. Scout responded by sticking with him, and as they came off the last turn, Scout just gave an inspiring effort to out kick the Northwest runner to the finish line.”

On the field, the Indians came away with two more district champions as each were in the pole vault events.

Senior Jack Rinehart continued his dominant final season at Jackson by winning a second-straight district championship in the boys pole vault. He did so with a mark of 15-feet, one-inch to advance to sectionals. Freshman Collin Havill also qualified for sectionals in the same event with a vault of 13-0 to take fourth.

The final individual district champion for Jackson came from junior Erin Huff, who won her first district title with a 10-6 vault. Fellow vaulter freshman Hadley Wyatt also qualified for sectionals in the event with a 9-0 mark, which placed her third overall.

The other athlete for the boys team to qualify for sectionals in two events was sophomore thrower Connor Tollison. He placed third in both of his events, first the shot put with a heave of 45-5.25 and finally the discus at 140-06.

Fellow sophomore Rhet Liley was the final athlete from the boys team to qualify for sectionals, which he did in the javelin with a personal-record throw of 165-08 to take third.

Jackson’s girls final two athletes to qualify for sectionals was sophomore Lisken Glass and junior Jessica Kucera. Both placed third in their respective events as Glass recorded a 33-4.75 in shot put, while Kucera had a throw of 107-02 in discus.