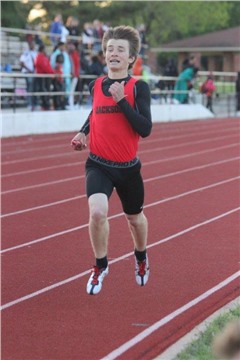 Each of the boys and girls teams qualified for 12 events in the upcoming Class 5 Sectional Meet this Saturday at Marquette High School in St. Louis.

The boys team finished with three event district champions while the girls team had two with each of its champions coming in field events.

Freshman Aaron Brown was the winner of two championships for the boys team first coming in the 400 when he recorded a time of 50.93 seconds to take the gold.

On the field for the Jackson boys, it was junior Justin Crane taking home an individual district championship in discus with a heave of 152 feet. Crane also qualified for sectionals in two other events for Jackson in shot put and javelin where he placed fourth in each event.

For the girls team, each individual title came in the field events as senior Nicole Humphreys took first place in shot put with a 37-foot, four-inch throw. She also was the runner up in discus with a mark of 112-01.

The other district champion for the girls team was junior Katherine Schumer, who took first place in pole vault with a jump of 11 feet, six inches. Finishing behind her in second place was fellow teammate freshman Erin Huff with a leap of 10-0.

Both the boys and girls team had three runner ups.

The final second-place finisher for Jackson’s girls team was senior Megan Barnum in the 1600 with a time of 5:26.03, which was 2.81 seconds behind district champion sophomore Abigail Juedemann of Lindbergh.

Barnum also qualified for sectionals in the 3200 with a third-place finish of 12 minutes, 18.47 seconds. Fellow senior Courtney Hahs finished behind Barnum in fourth place to qualify as well with a time of 12:32.26.

Freshman Donya Marx was one of the runner ups for Jackson in the field events when he recorded a high jump of 6-0. Also qualifying for sectionals in the same event was junior Pete Lake with a jump of 5-10 to finish in fourth place.

Lake was the final second-place finisher for Jackson’s boys team when he recorded a leap of 40-11.5.

The girls team had a total of five third-place finishes with both 4×400 and the 4×800 teams taking third in their respective events.

The girls 4×400 team, which is made up by sophomore Alexis Robson, freshman Kayden Fisher, sophomore Kennedy Bauer and junior Abigail Sadler took third with a time of 4:27.54.

Bauer and Sadler also help make up the 4×800 team along with junior Emma Masterson and sophomore Faith Littleton. The team placed third to qualify for sectionals with a time of 10:14.96.

Junior Lauryn Varner took third place in the high jump with a leap of 4-8.

Senior Macey Huff qualified for sectionals in two events starting in the long jump with a 15-5.75. She took third place in triple jump with a leap of 33-6.25.

The boys team only had one third-place finisher with junior Ean Buffington finishing the meet as a dual-event qualifier for sectionals.