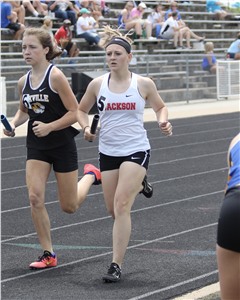 Jackson’s track and field program will be sending eight athletes to this year’s Class 5 State Championship Meet that will be held this Friday and Saturday at Jefferson City.

The Indians came away with three Sectional 1 Champions as they won both pole vault events and the 800-meter dash on the girls side.

Continuing his undefeated season was junior Jackson Rinehart, who won the pole vault with a leap of 15 feet, four inches to claim gold and qualify for state.

Only having one second-place finish this season in pole vault is senior Katie Schumer. She was able to win a sectional championship by jumping only two inches less than her personal record with a mark of 12-4.

Claiming the final sectional title for Jackson was junior Kaylee Wilson as she won the 800-meter dash with a time of two minutes, 23.87 seconds in what head coach Jim Stoverink called an exciting race.

“With 150 meters to go, Kaylee was sitting in fourth place with fifth and sixth right behind her,” Coach Stoverink said. “I knew it was going to be a dog fight down the stretch with all six girls wanting one of those four qualifying spots.”

Stoverink said he was confident in Wilson to finish in the top four since she has good foot speed and is quite the competitor.

“When they came off the final turn, [Wilson] moved to the outside and turned on an amazing kick,” Coach Stoverink said. “She powered down the home stretch, and as she passed the first three runners none of them could respond.”

Four other athletes were one place away from gold by taking second in their respective event.

“Ean’s times were not super fast for him, but that is because the athletes ran the race very tactically, which set up well for Ean because of his foot speed,” Coach Stoverink said. “I expect both races to be significantly faster next week at state.”

Another senior to qualify for state was Owen Leible as he took second in shot put with an even throw of 48 feet.

Brown took second in the 400-meter dash as he crossed the finish line in 50.28 seconds as Huff was the runner-up to Schumer in pole vault (10-6). Stoverink said Brown has the potential to earn a podium spot at state.

The final Jackson athlete to qualify for state was junior Kennedy Bauer in the 1600 as she took third overall with a time of 5:19.45.