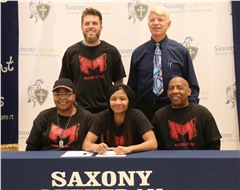 Before her final season of track and field at Saxony Lutheran, senior Bri Jenkins officially signed her National Letter of Intent to continue her career with Maryville University of St. Louis.

Following her seventh grade season, Jenkins was unsure if she would ever compete in track and field again and did not do so until high school.

This was because Jenkins fractured her hip that year, but current Saxony Lutheran basketball and track and field Assistant Coach Max Wieser influenced her to return.

In her sophomore year, Jenkins joined the track team while also playing soccer at the same time.

After Jenkins realized she could’ve reached sectionals in track that season, she decided to dedicate more of her efforts into the sport her junior year.

Jenkins won an individual SEMO South Conference Championship for all three of those events, while also coming away with two individual Class 2 District 1 titles in the 200 and long jump. She also helped lead the girls team to winning the conference title.

“[Track] just came so naturally to me — I didn’t even really train for it,” Jenkins said. “Going to state and getting as far as I did without even training just shows me how good I could be if I put a lot of work and time into it.”

Jenkins has now trained for track more than ever, heading into her final season by doing specific workouts four times a week starting at 6 a.m. along with lifting weights.

Jenkins said she has Coach Wieser to thank for everything because she wouldn’t have taken the sport back up if he hadn’t talked her into doing it.

Jenkins has also helped the girls basketball team to back-to-back district championships as a contributor off the bench her sophomore and junior year. She is now the starting center for the Crusaders and averages 10.3 points and 4.5 rebounds per game.