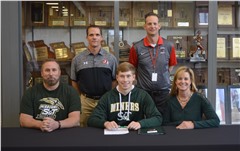 Track and field has been in Jackson senior Caleb Craft’s life ever since he was in first grade as a member of the youth program, and the sport is not going to be out of his life anytime soon.

Prior to his final high school season this spring, Craft has officially signed his national letter of intent with Missouri S&T to continue his career on the track.

“It’s awesome — I’m super excited to be competing at the next level,” Craft said. “[Missouri S&T’s academic prestige] ended up being the deciding factor for [wanting to be] an engineer. Along with that, I’m going to get to run track and be relatively close to home.”

Craft has decided to pursue engineering because he has always been intrigued with “how things work.”

In his junior campaign, Craft qualified for the Class 5 State Championship Meet last year in the 110-meter hurdles and as a member of the 4×400-meter relay team.

Craft also helped lead the 4×400 team to win both SEMO Conference and Class 5 District 1 Championships, while he was an individual conference champion in the 300-meter hurdles.

“I love being a part of the relay because that’s part of the team aspect in track and makes it super fun,” Craft said. “We took the 4×400 to state last year, and we’re going to be looking to do that again this year and hopefully finish a little better.”

Over the summer, Craft traveled to the University of New Mexico for the Great Southwest Classic, where he took part in the decathlon. He competed in a total of 10 events for the decathlon, which included the 100-meter dash, long jump, shot put, high jump, 400-meter dash, 110-meter hurdles, discus, pole vault, javelin and the 1500-meter run.

Craft placed 13th overall out of 17 in the decathlon as he combined for 4,776 points despite suffering injuries to his tricep and hip. He took third overall in shot put and seventh in the 400 among decathlon participants.

Craft said the experience from competing in the Great Southwest Classic alone will help him in his final high school season of track since he now has a better perspective on things.

The thing Craft is most excited about this upcoming season is being able to compete with his high school teammates one last time.

Craft not only is a member of Jackson’s track team but also helped lead the Indians football team to reach the Class 5 State Championship for the first time in 24 years.

Craft has been one of the football team’s starting safeties on defense the last two seasons, where he combined for 134 tackles, seven tackles for a loss, seven pass deflections and three interceptions. The Indians finished with a record of 24-2 overall and won back-to-back conference and district championships in the span.

“For me, I have a unique perspective on it because it’s not necessarily my favorite sport,” Craft said. “Seeing the support we got from the community throughout the whole year and especially those last couple games. You had people driving five hours to watch the Staley game and then obviously the state championship game had a huge turnout. That was one of the coolest things I’ve seen here, probably.”

Craft said signing with Missouri S&T took a lot of the pressure off heading into his final season of high school track, and while he wants to return to state, he also just wants to have fun.

“[I want] to have fun, stay relaxed and do what we can do,” Craft said.