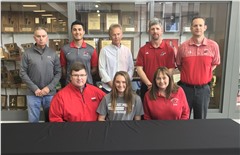 When Jackson’s three-time Class 5 All-State senior pole vaulter Katie Schumer went out for track and field in seventh grade, she wanted to either be a sprinter or hurdler.

One day during warm ups, the coaches asked the team if anyone had any experience in gymnastics. Schumer had participated in gymnastics for 12 years.

“Everybody parted ways like Moses and shoved me forward,” Schumer laughed. “I tried to quit for like two weeks, but I was too scared to talk to the coaches, so I just stuck around. Then I won my first junior high meet, and I was like, ‘OK, maybe I’m better at this than I am sprinting because I’m never going to win anything over there.’”

Flash forward to present day and Schumer has now officially signed her National Letter of Intent as a pole vaulter with Southeast Missouri State University.

Schumer, who lives close to Southeast’s campus, was watching a track meet there one day since several of her former teammates pole vault there as well. While doing so, Southeast’s head coach Eric Crumpecker approached Schumer.

Crumpecker told Schumer that he would be able to offer her a scholarship, which filled Schumer with utter excitement.

“To go to SEMO is really exciting because it’s in my back yard,” Schumer said. “I can come hang out here, and my family can come and watch me, so it’s not like I’m going far.”

When talking about being all-state three times throughout her career, Schumer said she didn’t think she was going to be able to earn honors as a freshman.

Once she did claim all-state honors with a leap of 10 feet, six inches in 2015, Schumer used that as motivation since she knew she was expected to be on the podium for the rest of her career.

That mark placed Schumer fifth overall, the same spot she finished her sophomore year, but recorded a higher jump of 10-9 in 2016.

Last season at the end of her junior year, Schumer moved up two spots and took third place with a mark of 11-6 at the 2017 state meet.

“I compete all year round, so even in the winter I’m still training,” Schumer said. “You have to constantly just strive to be better than you were yesterday.”

Jackson track and field head coach Jim Stoverink said he doesn’t get to work with Schumer a lot, but he said he’s going to miss the 10 points she scores by winning most pole vault events.

“She is just a guaranteed performance,” Stoverink said. “You always know you’re going to get a great performance out of her. … That’s hard to replace when you get guaranteed top points from that one event.”

Over the weekend, Jackson sent 10 athletes including Schumer to compete in the annual Kansas Relays. Schumer finished the highest for Jackson as she placed second by tying her personal record of 11-11.75.

“I didn’t have the best meet before [the Kansas Relays], so I went back to practice and we changed a bunch of things up,” Schumer said. “I just decided that this meet I was going to treat as a practice meet. I was going to try to jump well instead of jumping high, and that really worked for me.”

Looking ahead to training for collegiate meets, Schumer said she knows workouts will certainly be more rigorous, but she’s excited for that because she loves to train.

While in the classroom, Schumer will be studying biochemistry. She said she is interested in this field because when she was a gymnast, she was always suffering injuries.

“I was always at the doctor, and I want to go into sports medicine,” Schumer said. “I just want to be able to be the doctor that people were for me when I was little.”