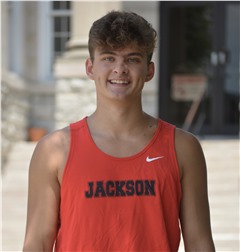 Jackson track and field’s Jack Rinehart is the type of person who is going to accomplish something when he sets his mind to it, which is what led him to become the first ever Cash-Book Journal Male Athlete of the Year.

Rinehart’s father was a pole vaulter when he participated in track and field at Sikeston, and Jack told him he would become a better vaulter than he was. It’s safe to say Jack did that after finishing on the Class 5 State Podium back-to-back and by winning two conference, two district and one sectional individual championships.

Rinehart also said he was going to break Dakota Maddox’s pole vault record of 15-feet, 7-inches that was set in 2016. He did that this season at the Kansas Relays.

Jack didn’t start pole vaulting until his freshman year at Jackson, and up to that point he had wrestled and played basketball and soccer. It was easy to leave these sports after he found his true passion in vaulting.

Rinehart does credit a sport like wrestling by helping him be mentally prepared to pole vault. One of his coaches at Jackson, Dr. Tim Rademaker, told him it’s one of the most difficult sports there is. Wrestling also improved his upper body strength, which is something a vaulter needs.

“[Pole vaulting] is 90% mental and 10% physical,” Rinehart said. “That’s what my coach says and it’s true, so you really have to think different than everything else you do. Once you find something you love, you just want to do it every single day all day long.”

This is exactly what Rinehart has done for the past several years — he practices pole vaulting two times a week.

Practice is year round, so during the winter Rinehart goes to Southeast Missouri State to practice since Jackson doesn’t have an indoor facility yet.

One of the more difficult aspects of being a pole vaulter is having to deal with shin splints, which Rinehart said he experiences worse than everyone else because he is so aggressive.

Jack said pole vaulters can either take a break if they’re having shin splints or toughen up. He chooses the latter because he doesn’t have time to take a break from becoming a better vaulter.

The other difficult factor that comes with pole vaulting is being afraid of actually doing it since the act of vaulting is using a long flexible pole as an aid to jump several feet in the air over a bar.

“It’s a mindset really because you might fall off the pit one time and land on the ground and you get scared,” Rinehart said. “You have to know you can do it — every time you have to trust yourself and trust the process you’re about to do.”

Along with Rinehart telling his family and friends that he would accomplish a lot at Jackson, he made a promise to Coach Rademaker that he would give it his all after one simple question.

“My coach would always say, ‘Are you a man or mouse?’” Rinehart said. “I said, ‘I’m a man, Coach!’ He said, ‘OK, then prove it.’ So I promised I’d give him everything I’ve got, and at conference, districts, sectionals and state and every single meet, I try my hardest. My coach, my family and friends really pushed me the whole time.”

Coach Rademaker, along with fellow assistant coach Bob Sink, have given Rinehart plenty of advice on how to think when it comes to pole vaulting. The coaches even gave Jack a book to read, which was “Ninety Percent Mental.”

“They are like old-time guys, so they bring out a radio every single day and play these old songs,” Rinehart laughed. “They’d blare it and say, ‘Don’t think about this, but you have to do this and this and this.’ Coach Rad is one of the best guys I know — he would do anything for me.”

Rademaker proved this one time because Rinehart was in need of new poles before the state meet, so Rademaker spent one day driving to Lawrence, Kansas, to get them and the next day driving back to Missouri.

Rinehart, who signed with Southeast Missouri State following his final season at Jackson, made quite the name for himself in Missouri track and field by having one of the top pole vaults in the state his last two years.

One of the biggest meets of the year for Jackson is the Kansas Relays where teams from several states in the Midwest come to compete. Unfortunately, the final day of the meet when pole vault is held was rained out Rinehart’s junior year.

At this year’s meet he ended up breaking Jackson’s program vault record with a 15-8, which currently stands as his personal best jump.

“I was super nervous because all the big guys were there jumping high — it’s super competitive,” Rinehart said. “I tied the first place guy, so in one attempt I would’ve had him but it was a big deal.”

Rinehart helped lead the Jackson boys team to win conference and districts this season and finished his senior year as one of Jackson’s five all-state finishers.

Rinehart improved from seventh to third place at state in a span of a year, recording a vault of 14-9 in 2018 and improving to 15-3 this season, which was actually tied for second but Battle senior Darin Smalls jumped 15-3 successfully in one less attempt than Jack.

“It was the hottest meet ever, and I just had those new poles I’ve only practiced one day on,” Rinehart said. “Going from seventh place at state to third place is a really big deal, and my family was super excited and my coaches were super proud.”