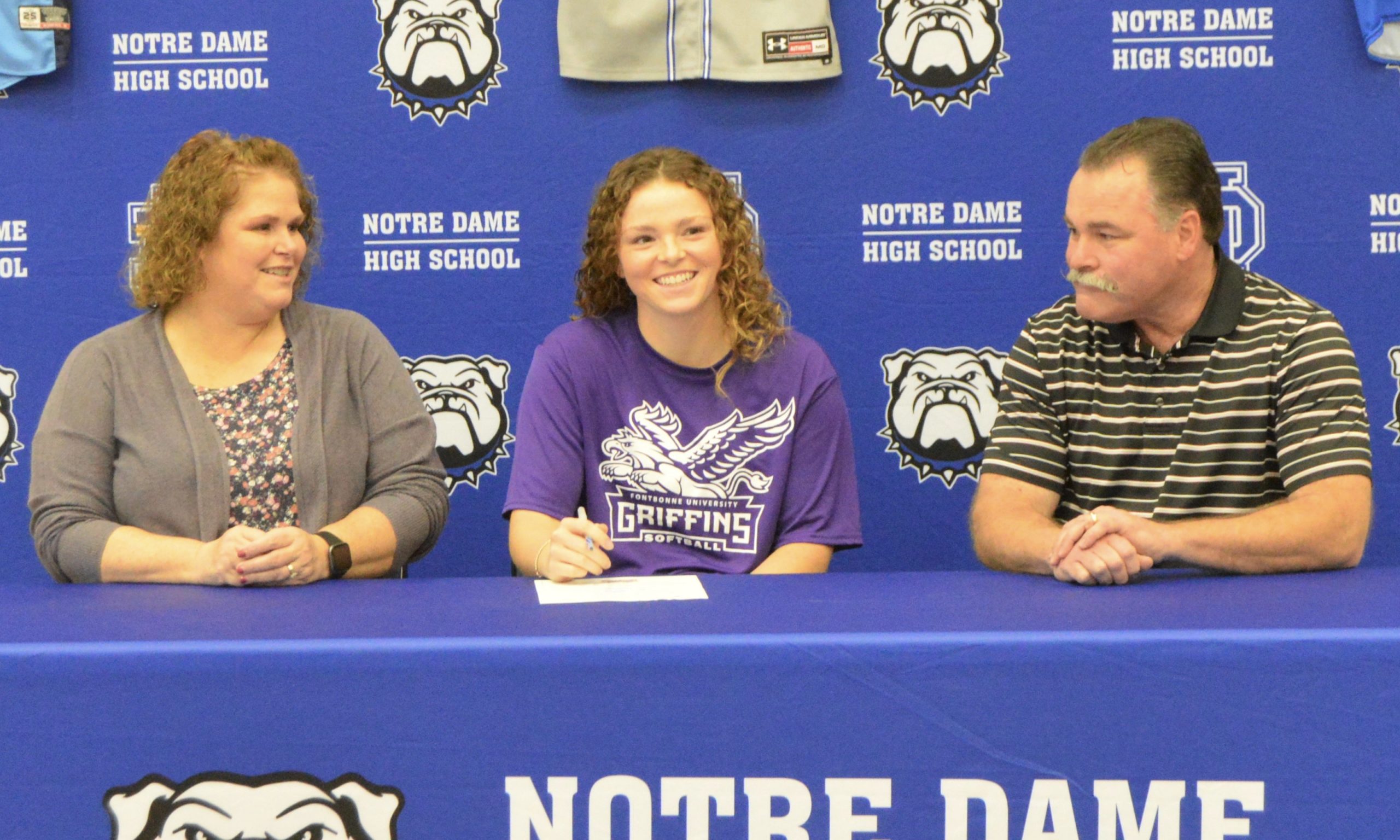 While growing up, Ashley Carrow tried out multiple sports like basketball, gymnastics and volleyball before she found her true love — softball.

The Notre Dame graduate is now preparing to continue doing what she loves at Fontbonne, which is the school Carrow signed with back in December.

Playing college softball has been a dream of Carrow’s ever since her freshman year when she’d witness other players signing their own national letters of intent.

“That’s when I decided I wanted to play college softball, but I’ve also been working towards this ever since I started playing softball when I was a young kid,” Carrow said. “When I saw people do their signings, I thought, ‘I want that to be me sitting there at the table.’ It’s such a surreal thing because it’s so awesome to sit there and be like, ‘Yeah, I’m going to be playing college ball.’”

In her final season with Notre Dame this fall, Carrow earned both SEMO All-Conference and Class 5 District 1 All-District honors. Ashley led the Bulldogs in batting average (.443), hits (47), runs (40) and doubles (12).

At Fontbonne, Ashley will have the opportunity to compete for one of the three starting outfield positions as a freshman since each of the starters from this season were seniors and have graduated.

“There being three spots open is a big thing because with most colleges when you get there as a freshman a lot of times you don’t play,” Carrow said. “At Fontbonne, they’re very good about letting whoever earns the spot play the spot.

“With most Division-I colleges, it’s more seniors and juniors playing and you just sit as an underclassmen. That just wasn’t what I was looking for. When I go to college, I want to play, and I’m going to work towards that this summer.”

Fontbonne (Division-III) went 22-19 overall and made the NCAA Regionals after winning the St. Louis Intercollegiate Athletic Conference Tournament this spring.

The Griffins are coached by Casey Cromwell, who Carrow is thoroughly excited to play for because of her coaching style.

“Coach Casey make sure every girl is comfortable in what they want to do,” Ashley said. “I’ve talked to a few other college coaches, and they say ‘You have to hit and move your feet this certain way.’ I’m just like, ‘You’re not going to be the player were that you recruited because you’re not going to hit as well if you’re trying to do this other thing that didn’t work for you.’

“With Casey I love that I can go up there and she can tweak little things instead of trying to fix the whole swing. She’s just very nice about it, too. There are other coaches who I’ve felt like I can’t open up to, but with her I can real be who I want to be. I know I can become a better player with her as my coach.”

Carrow is no stranger to making an impact early on in her career for whatever team she is playing for, whether it’s been Notre Dame or with her primary travel team the Perryville Stars.

During her sophomore and junior year, Carrow helped the Bulldogs win back-to-back district championships and have a combined overall record of 52-9. Ashley had a batting average of .433 her sophomore campaign, while recording 31 hits, two home runs, 28 runs, 21 runs batted in and 11 steals as a junior.

Right before her freshman season at Notre Dame in 2018, Ashley helped the Stars win the USSSA National Championship and had a three-run, game-winning triple in game four of the tournament.

“The Perryville Stars have shaped me into the person I am today because they also work on the player off the field — not just on the field,” Carrow said. “They make sure you know how to give a good handshake, look someone in the eye when you’re talking and how to make a bond with someone and not just be there to work. Every girl that I’ve talked to loves the Stars, and I love the atmosphere with those girls in the program. I’m just so happy there every time.”

Carrow will be playing with four former teammates from the Perryville Stars at Fontbonne in sophomores Alaina Hotop (St. Vincent) and Hailey Kutz (Notre Dame), and seniors Lily Jones (Kelly) and Patience Vandermierden (Leopold). Ashley didn’t want to know anyone at her college when she first thought of going, but now she can’t wait to be with people she already knows.

“I really looked up to those girls when I was younger — they may not know that, but they were a big influence on me,” Carrow said. “I remember when Lily and Patience signed I was like, ‘What even is Fontbonne?’ … I’m excited to see those girls again because hopefully they can help guide me through college.

“Hailey and Alaina have already helped me a little bit with figuring out housing and what to expect coming in as a freshman. Hopefully they can give me advice on what to do in school or out of school.”

Off the field at Fontbonne, Carrow is going to pursue a career as a physician assistant and will major in medical laboratory sciences.