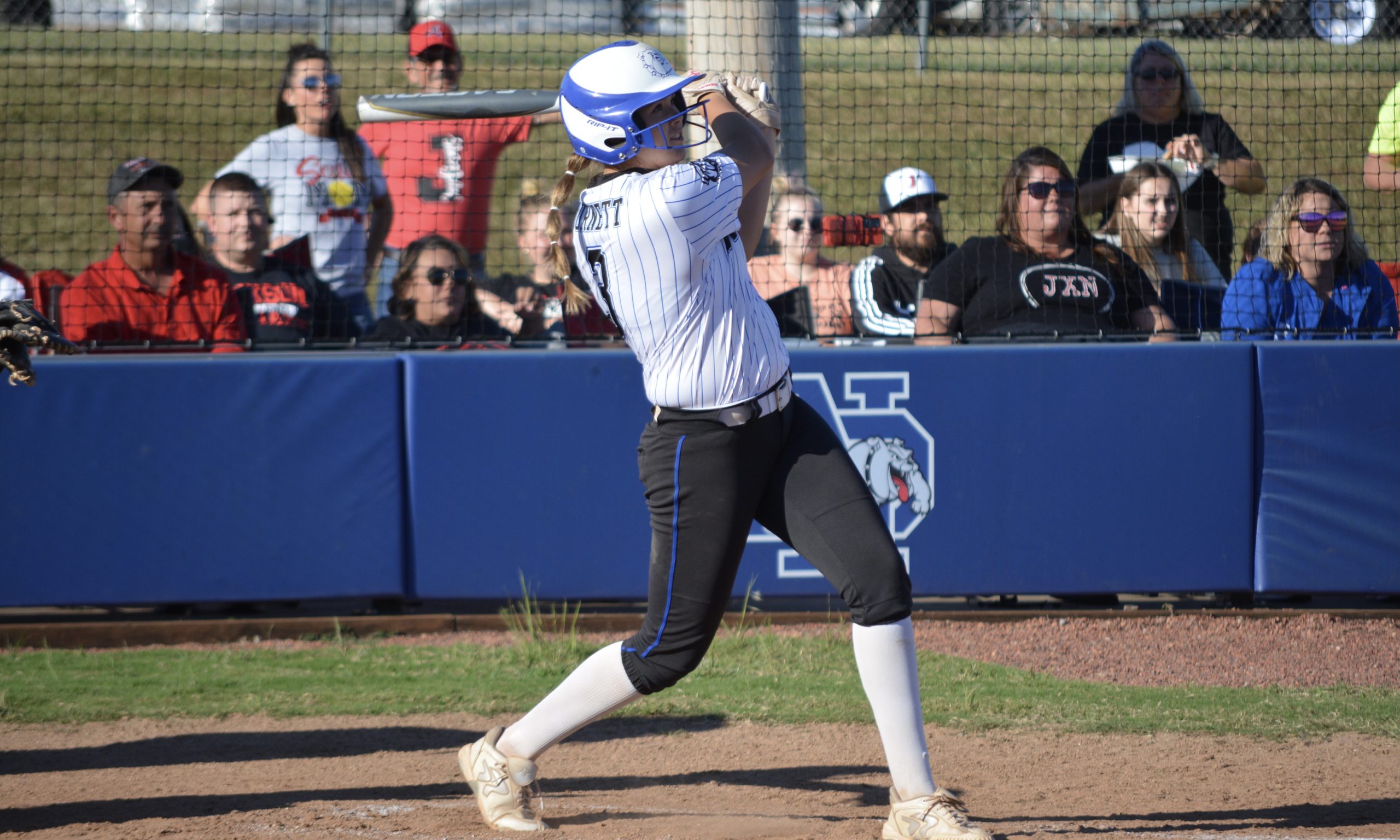 The last time Notre Dame softball fell to SEMO Conference and Class 5 District 1 rival Jackson was back in 2018, and that streak is still intact even after the Indians took a 3-0 lead in the first inning over the Bulldogs last Thursday.

Notre Dame hosted the contest that wasn’t decided until the bottom of the seventh, which was when the game’s only lead change occurred. Jackson even added an insurance run in the top of the seventh to make it 4-2, but this still didn’t make Indians head coach Shawn Wilding comfortable.

“You never have it till they got three outs — and you had 8-9-1 coming up, which was ideal because they hadn’t been hitting very well off of us,” Coach Wilding said. “They get two hits and it’s like, ‘We’re in trouble,’ because even if the leadoff gets out, they’ve got [plenty of power at the top].”

Jackson was in more trouble when Notre Dame’s leadoff hitter senior center fielder Ashley Carrow bunted for a single, which led to the bases being loaded for the Bulldogs with no outs as they only trailed by two runs.

This meant Jackson senior pitcher Karli Johnson was then tasked with facing juniors shortstop Kadi Dohogne, first baseman Hailey Burnett and third baseman Ainsley Burnett, but she only ended up going against Dohogne and Burnett.

Prior to Dohogne’s at bat, Notre Dame junior pitcher Halle Ressell had a meeting with Dohogne and Burnett around home plate to tell them, “I love you guys so much,” and that she trusted them and believed in them, Hailey said.

Dohogne sent one runner home off of a fielder’s choice, which allowed junior Emma Steimle to score the Bulldogs third run of the game to trail 4-3. However, one runner was thrown out at second for there to only be two runners on with one out.

However, Hailey Burnett didn’t even need more than one runner on base to complete the comeback victory for Notre Dame as she knocked the ball over the left-center field wall for three runs and a 6-4 win over the Indians. This was Burnett’s second homer of the game as she made it a one-run game with a two-run bomb back in the bottom of the fourth.

“We had the pressure on us because we beat them five times last year, and we knew they were coming at us with full force,” Burnett said. “I’ve seen [Johnson] a lot, and I’m used to that kind of speed with travel ball. I went up there with confidence and it worked.

“I knew we only had one out and that I had my cousin Ainsley behind me, so I trusted her in case I didn’t come through. All I was planning on was a ground ball to score one run.”

Hailey and Ainsley Burnett are currently tied as the Bulldogs leader in home runs with six apiece as Ainsley is first in runs batted in with 34, while Hailey paces her at 29. The only other player for Notre Dame who currently has multiple home runs is senior second baseman Audrey LeGrand with two as four other Bulldogs have also hit one dinger.

Dohogne is one of those players for Notre Dame with one homer, but she is currently second in batting average with a .444 behind Ainsley Burnett’s .446. Carrow is first in runs scored (28) and third in BA at .434 while being tied with Ainsley for most hits (33) as Dohogne is second (32). Hailey Burnett has scored the second most runs behind Carrow with 22.

The inning before Burnett hit her walk-off home run she had to pitch in relief for Ressell, who went six innings and tied for a game-high five strikeouts with Johnson. Ressell didn’t allow one more run after Jackson scored three in the first.

Ressell has recorded the most wins at the rubber for Notre Dame this season with a record of 8-3 overall on top of her team-high 51 strike-outs and team-best earned run average of 3.38.

Burnett allowed two hits with the lone run coming off a triple by senior second baseman Kylie Darrow, which sent pinch runner junior Briaysia Purl home for the score. Even though Notre Dame then trailed by two runs after Burnett came in to pitch, Hailey still had faith in the bottom of her team’s lineup to produce.

Notre Dame seniors designated hitter Marianne Renaud and catcher Carolyne Cork did just that by recording back-to-back singles, which both led to runs, of course. Cork recorded a double back in the bottom of the fifth when the Bulldogs had two runners stranded.

“[Cork and Renaud] have been working their tails off like everybody else and expecting a big year but just come out of the gate struggling,” Notre Dame head coach Jeff Graviett said. “Cork has been trying to find a way to get on base, and she had two hits today. We don’t [have that walk-off win] if they don’t start that. It changed the complexity of the game.”

Jackson’s early lead in the game was started off by an RBI triple from senior shortstop Miranda Carnell, followed up by senior catcher Miranda Ladson’s two-run homer.

This past weekend in the Jackson Invitational, both teams finished 3-1.