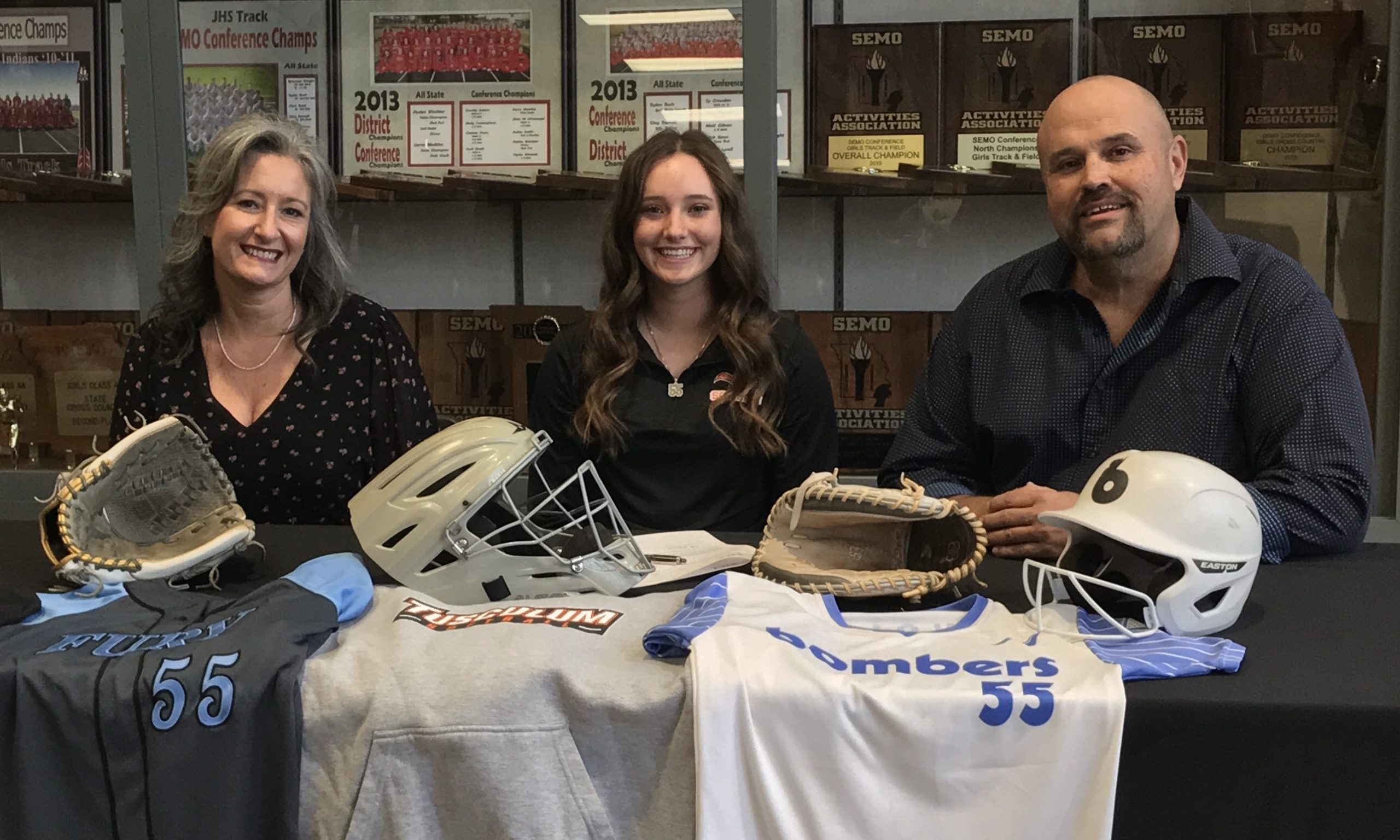 Softball is a sport that Jackson senior Kylie Darrow has basically dedicated her entire life to. This commitment has not only led Darrow to have a decorated high school career with the Indians, but most importantly a scholarship to play at the next level.

Earlier this month, Darrow made things official by signing with Tusculum University, which is a Division-II school out of Greeneville, Tennessee.

Tusculum had only first contacted Kylie two months prior to her signing day as she had never heard of the school prior to that. Upon her visit, Darrow said the campus was gorgeous and that the softball program had a family-like atmosphere.

Darrow said there were several other schools she looked at before signing with Tusculum, but something happened that made Kylie realize, “OK, that’s not it.” Even though Tusculum came in late to Darrow’s recruiting process, she said it was the feeling of unconditional love that made her sign with them.

However, there were many nights Darrow said she spent crying with her parents thinking maybe her dream would not come true.

“[Signing is] a crazy and surreal feeling, honestly. It’s hard to believe it all happened because it didn’t seem like it was for a while, especially when COVID hit,” Darrow said. “It’s such a blessing to see my hard work pay off and to have all of the people that have loved and supported me through the hard times be here today.”

Kylie first started playing softball competitively when she was four-years-old as she was one of those kids who played almost every sport in the book. Darrow said what made her stick and grow a love for softball is that she was always consumed by it during every single practice.

“I wanted to learn more every second and was never satisfied with ‘enough’ information,” Darrow said. “It just built into a love and life.”

Darrow played in her first season of travel ball when she was 10, and this is when her dream of playing college softball began. Kylie said she noticed just how competitive the sport was between players with immense talent. The travel ball teams Darrow has played for over her career include Bombers, Fury and Extreme.

“You learn a lot of different dynamics and how to work with different teammates and teams that have different philosophies, which helped me grow so much,” Kylie said. “Playing in different coach’s strategies is a whole other side of the game that I soaked up and loved.”

Darrow, who has been a standstill at second base for Jackson the past several years, recorded team-highs in batting average (.442), hits (42), singles (34), triples (three), runs scored (35) and stolen bases (15) for her final season with the Indians.

Defensively, Kylie only suffered three errors for a fielding percentage of .936 while recording 44 outs. She also helped Jackson record its second-straight 20-win season as the Indians finished 21-8 overall.

“At Jackson, I’ve made so many lifelong friends and have had coaches that believe in me,” Kylie said. “I’ve learned what it is to put in hard work and pick other people up.

“My mentality at the plate is, ‘Get up there, see the ball and hit the ball.’ It’s all about doing damage and getting on base for your team. You have to hit, score and score to win.”

Darrow said playing a sport like softball does put a damper on her social life simply because of how much time she puts into it. Outside of the high school season, playing travel ball is crucial for players in their own personal growth as well as the recruitment process.

“Every weekend, I was in a different state or going to different games,” Darrow said. “It wore down my body, but I have been to so many different places. I’m so blessed because I know people all the way across the country that are my best friends.”

What Kylie is the most excited for about playing softball should come to no one’s surprise because it’s what she’s been doing her entire career, which is learning and growing. As far as what Darrow can bring to the table on the college ranks, she believes her best quality will be being a really good teammate and bringing her go-getter attitude every single day.

“Every time I was looking for a school, I wanted them to push me,” Darrow said. “When I went to Tusculum, they gave me so much feedback that my head was almost spinning. I loved every second of it.”

Kylie will pursue a career in education as she wants to teach third through fifth grade. “My aunt is a teacher, so I’ve seen a lot of that. They’re so sweet and so innocent — you can have great conversations with them. I want to build them up to be the people they know they can be,” Darrow said.