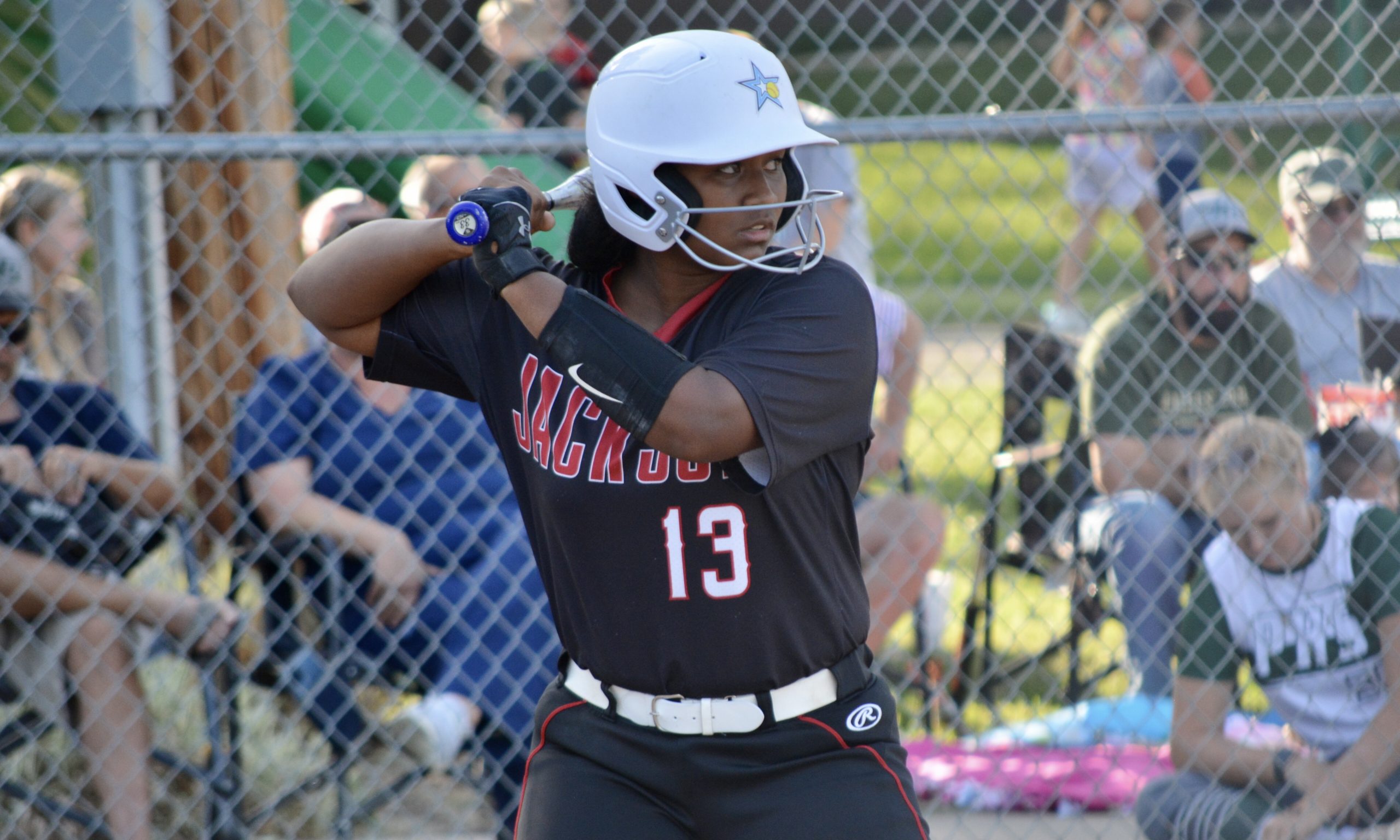 Sophomore Kimmora Carothers threw a shutout and hit a solo home run in Jackson’s 2-0 win over Perryville Thursday on the road. Photo by Jay Forness

It’s safe to say the Jackson softball team looks a bit different this fall after graduating five starters from last season, one of which was the program’s all-time leader in pitching wins — 2022 graduate Karli Johnson.

This group of Indians helped Jackson win a combined 41 games (13 losses) over the last two seasons with a Class 5 District 1 runner-up finish in 2020.

However, it’s a new year for Jackson meaning that it’s also a new team, and this is the motto Indians head coach Shawn Wilding to help his players realize they need to step up this fall.

In a road game against the 2021 Class 4 Final Four fourth-place Perryville Pirates last Thursday, two first-year starters scored individual runs to give Jackson a 2-0 win over the Pirates.

One of them was Indians sophomore pitcher Kimmora Carothers, and she not only pitched a complete-game shutout but also hit a solo home run in the top of the fifth inning. Carothers’ bomb over the left-field wall came with two outs left in the inning and against Pirates senior pitcher Allyson Stortz, who has already recorded 55 strikeouts through six games.

“I looked at Kimmora, and I said, ‘If she throws you your pitch, bring the hammer,’” Coach Wilding said. “She hit it and it was a no brainer that it was gone, and that was awesome. To come up with a big hit and find the energy to finish out a game pitching, it’s big for her. My hat goes off to Stortz because she made a lot of my hitters look really foolish, so you’ve got to take advantages like that. … Perryville did a great job putting pressure on us at the end.”

Jackson’s second and final run of the game was scored by another underclassman in freshman left fielder Maddie Stelling. Her run came right after Carothers’ homer, where Stelling arguably had the play of the game.

Maddie bunted on her at bat to merely get on base, and her would-be single turned into an inside-the-park home run after an error at first base. Aside from the error, this score wouldn’t have been possible if not for Stelling’s outstanding quickness while running the bases.

“Maddie is an amazing athlete and talent, but she doubts herself sometimes. She shook off doubt today,” Wilding said. “Every time I try to make her run aggressively, she stops. When that ball went to right field and she made it to third base, I told her, ‘You’re going home,’ and she just kept going.

“She rounded third looking at me still pumped, so instead of locking it up I was like, ‘This girl wants to score.’ Once she launched it that way, I knew she had to run. She’s fast — she makes fast people not look so fast.”

On the rubber, Carothers finished the game with five strikeouts to Stortz’s eight while only allowing four hits and, of course, no runs. Three of Kimmora’s strikeouts were the final outs of the fourth, fifth and sixth inning.

“My hat goes off to Kimmora because you wouldn’t have thought a couple days ago she’d be lights out,” Wilding said. “In her last two starts, she’s only given up one run through about 12 innings. She just comes after it, and I’m very proud of that young lady.

“She takes command, and she has a live fastball and knows where to put it. She’s been doing a really nice job of keeping the ball down because when she was younger it was up, up, up. Now it’s down, down, down and that’s great placement because it means ground balls all day. That was really good.”

The Jackson defense behind Carothers was just as key to the shutout as her pitching. Indians freshman Ashlyn Dawes made one particular standout play in center field. Perryville had a runner on first due to an error and then had a line-drive double by Stortz.

Perryville sophomore Jenna Brewer tried to advance home, but Dawes collected the ball quickly and heaved it to sophomore shortstop Miley Conklin, who got the ball to sophomore catcher Jaylie Walther for the out.

“That was Dawes’ first start in center field because we moved our center fielder to catcher,” Coach Wilding said. “She’s a freshman, but she does everything. Works hard at practice and plays in the outfield, infield and is one of my top pitchers. Dawes saw it and got there, threw it to the best arm on that side of the infield, and Mylie caught it and was turning to make the throw when Perryville’s runner was at third when she threw it.”

In the game right before Jackson’s win over Perryville, the Indians fell to district opponents Lindbergh 4-3 on the road. Coach Wilding said it looked like a completely different team through the course of 24 hours.

“We made a few mental mistakes against Lindbergh, so coach Josh Roach and I made a few lineup changes on the way home,” Wilding said. “This game was a test for us, and our players didn’t fold. They never lost sight, and they stuck to their plan.”