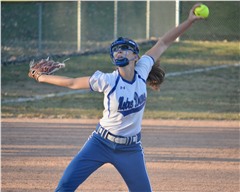 Last fall, the Cape Notre Dame softball team won its seventh district championship in the last 10 years while finishing 27-6 overall and were only five runs away from reaching the Class 3 Final Four.

Along with those district titles, the Bulldogs were able to reach the final four a total of four times. This success will now push them up to the highest classification this fall due to MSHSAA’s new success multiplier.

Each private school’s classification for individual sports will be determined by postseason success over the past six seasons. A district title is worth one point, quarterfinal wins are worth two, semifinal wins are worth three and a state championship is worth four (a team can only receive a maximum of four points per season).

The points from the past six seasons are then added up: between zero and two points, a team remains in the same class; between three and seven points, a team moves up one class; and if the score is eight or more, the team will move up two classes.

MSHSAA will add classes to prevent two teams with a vast difference in enrollment size (double the enrollment) from facing each other.

Softball will now have five classes and Notre Dame’s head coach Jeff Graviett knows his team will move up two spots since his team has accumulated 10 points over the last six seasons.

“We were the only softball team that got bumped up twice,” Coach Graviett said. “You’re proud your program is put into that category, but as I told the girls, ‘I was here when we went through the original multiplier. We didn’t sit and talk about it. Whoever we played, we played.’”

Notre Dame returns all but three starters from last year’s team with one of those 2020 graduates being the Bulldogs two-time all-state outfielder and leadoff hitter Riley Burger.

Burger and the other three-year starters that graduated in first baseman Grace Lemons and catcher Kristen Barwick will be missed, but Notre Dame returns plenty of offense as well as its ace pitcher from the last three seasons.

Taking the rubber for the fourth-consecutive year will be none other than senior Hailey Kutz, who has produced an overall record of 52-11 with 352 strikeouts in her three seasons as Notre Dame’s starting pitcher.

“Here it is — it’s Hailey’s finale,” Graviett said. “She had a phenomenal freshman year, struggled a little bit as a sophomore and is now back in form. She’s had a really good summer and has looked really good here the last couple of weeks. We’re expecting to hopefully get that dominant kid we saw her freshman year.”

As a freshman, Kutz finished 20-2 overall while striking out 178 batters with an earned run average of 1.55 (30 earned runs). Notre Dame reached the Class 3 state title game that season as the Bulldogs fell to Monett 4-1.

Also returning for the Bulldogs will be two of the team’s top-three hitters from 2019 in senior outfielder Halle Heuring and sophomore third baseman Ainsley Burnett.

Heuring finished with a team-high batting average of .551 while breaking the program’s single-season hits record with 59 last year. Burnett finished second in both categories with a .527 BA and 58 hits while tying Notre Dame’s single-season runs batted in record at 55.

“[Having those two back] is huge because one of them is your on base person [Heuring] and the other drove them in [Burnett],” Coach Graviett said. “I’ve already talked to them and it’s going to be tough to repeat what they did. One, maybe it’s unrealistic stats wise, but two, how many games we get in this fall could be another [factor].”

Notre Dame also hit a combined 13 home runs in 2019 as Burnett was the team’s leader with four while Carrow and Dohogne came up with two and one dingers, respectively.

Heuring returns as the team’s leading run scorer at 49, followed by Lochmann (35), sophomore Emma Steimle (32), Compas (31), Burnett (31) and Dohogne (22). Heuring is also the Bulldogs returning leader in stolen bases at 20 as Lochman finished with 12 while Steimle paced her at 11 overall.

Coach Graviett describes his team as being 15 players deep when it comes to competing for starting roles and filling the lineup. He has told his team, “The lineup we run after the first game won’t be the one we run after the last game.”