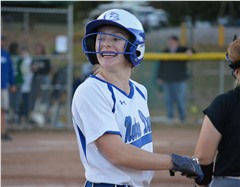 Nothing was over until the Cape Notre Dame softball team said it was last Friday evening at the Perryville City Park.

The No. 1 seeded Bulldogs were down to No. 3 seed Perryville 3-0 heading into the seventh inning of the Class 3 District 1 Championship, the same title the Pirates won a year ago after defeating Notre Dame in the semifinals.

Notre Dame’s offense recorded five of its eight hits through the first six innings but stranded all five runners to come away scoreless.

Perryville had only scored one run through five innings until the top of the sixth when  junior Brooke Huber scored on a sacrifice fly to make it 2-0. Senior Makayla Burns then drove in courtesy runner sophomore Katie Burns for the Pirates third and final run.

The Bulldogs were able to get a runner on base in the bottom of the sixth, but senior Makayla Brown forced a fly out and then recorded one of her four strikeouts to end the inning.

Down 3-0 with one inning remaining, junior pitcher Hailey Kutz and Notre Dame’s defense were able to shutout Perryville’s offense for a fifth inning in the top of the seventh. This allowed for a comeback none of these Bulldogs will ever forget.

“We made some really good defensive plays with runners on,” Notre Dame head coach Jeff Graviett said. “Kalie Compas made some phenomenal plays at second base, Caroline Lochmann had a diving catch in left field, and Perryville to me is very comparable to us offensively.

“They hit up and down the lineup and have speed at the top, so they’re tough to contain. So for [Kutz] to come in here and hold them to three runs to give us a chance to win that game is something you want to look at.”

Notre Dame had its final three batters of the lineup up in the seventh and were able to get two runners on base early, thanks to freshman Kadi Dohogne being walked after getting hit by a pitch and sophomore Ashley Carrow recording a single.

Freshman Emma Steimle entered as a courtesy runner for Dohogne, and she ended up scoring the Bulldogs first run after junior Kalie Compas forced an error at second base. Junior Caroline Loch-mann then forced Perryville to make another error for Carrow to score.

Now down 3-2 with no outs in the bottom of the seventh, enter Notre Dame senior Riley Burger.

In the bottom of the fifth inning with two runners on base and two outs, Burger struck out looking and returned to the dugout thinking that was the last at bat of her softball career. This was also her second strikeout of the game.

“That second time she struck out and you saw her demeanor, I think she really felt like that was the last at bat of her softball career,” Coach Graviett said. “I’ve seen a lot of times in my years coaching kids think that’s their last one, but then things work out, and they get another one.”

Burger took two balls to start her at bat and then hit a ground ball to center field, which sent Lochmann home to tie the game and keep her and the rest of the Bulldogs season alive.

The Pirates then forced junior Haile Heuring and freshman Ainsley Burnett, who have recorded 50-plus hits this season, to pop out.

On the final at bat of the game with two runners on base and two outs, senior Grace Lemons was able to end the game with a 1-run, walk-off single for Notre Dame to win 4-3. This was the first hit of the game for Lemons, who had failed to reach base on her previous three at bats.

“It was one of those crazy games — [Perryville] was arguably the better team for the first six and a half innings, but we were lucky to be the better bottom half team,” Coach Graviett said. “A lot of things stand out, but the fact that Hailey Kutz stayed in there, battled and only gave up three runs to give us a chance was probably the best thing that happened for us in the first six and a half.

“We were just looking for a break, and they hit a batter and make an error, so we took over from there. They hadn’t given us one in the prior 13 innings of play, and they gave us one in the final 14, and we took advantage of it.”

This win allowed Notre Dame to capture its fifth district championship in the last six years, and the team is now two wins away from returning to the Class 3 Final Four. The Bulldogs finished as one of the top three teams in Class 3 from 2015 to 2017.

Notre Dame (26-5) will host Hillsboro (20-9) this afternoon in the Class 3 Sectional round. The Bulldogs defeated the Hawks 2-0 in sectionals two years ago.