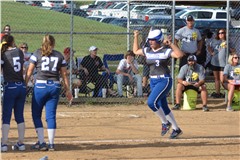 The Notre Dame softball team continued to prove why it is one of the most dominant programs in Southeast Missouri by winning six out of the seven games the team played last week.

One of these wins came against SEMO Conference opponent Jackson Thursday on the road, which the Bulldogs (19-4, 6-0 SEMO) defeated 4-2 to start this season. Notre Dame scored eight runs in the first two innings for an eventual 10-6 win over the Indians (10-8, 2-2).

Driving in four runs for the Bulldogs was senior first baseman Grace Lemons, who belted a 3-run home run in the top of the second inning. She also had a 1-run double in the seventh to send junior Halle Heuring home for Notre Dame’s 10th and final run of the game.

“[That’s] just senior leadership [from Lemons],” Notre Dame head coach Jeff Graviett said. “Nothing more than that big one in the seventh. … I told them, ‘You see how one more run takes the wind out of the sails?’”

Heuring scored a game-high four runs for the Bulldogs while also recording a team-high three hits and drove in one runner in her four at bats. Also scoring multiple runs for Notre Dame was freshman third baseman Ainsley Burnett with two off two hits and had one RBI.

Picking up the win on the mound for the Bulldogs was junior pitcher Hailey Kutz (15-4), who went six innings with two strikeouts. She allowed a total of 10 hits for Jackson’s six runs scored while only walking two.

Taking the loss for the Indians was sophomore Karli Johnson (5-3) as she pitched all seven innings with two strikeouts. She allowed 13 hits and walked five batters.

Jackson’s lone run in the first four innings came with two outs as senior shortstop Morgan Conklin drove in junior center fielder Alli Gartman with a ground ball to the outfield in the bottom of the first. Conklin and senior first baseman Ashlyn Prince were stranded on base to end the inning.

The Indians trailed 9-1 heading into the bottom of the fifth inning where they were able to score five runs to bring the game within three runs at 9-6.

The first score came off the second home run of the game as Prince hit the ball over the center field fence for two runs. Prince also led Jackson with a team-high three hits in the game.

Later in the inning with one out, sophomore designated hitter Miranda Ladson came up with a 2-run double off a line drive to center field for two more runs. Senior right fielder Abby Gates drove in the final run off a sacrifice fly to send junior catcher Ainsley Watson home.

“I just said, ‘Hit with two strikes. Make [Kutz] throw more than 10 pitches this inning — get her uncomfortable where she has to battle you,’” Jackson head coach Shawn Wilding said. “They did, and in the sixth and seventh we had ducks on the pond but got undisciplined.”

Jackson failed to score another run against Notre Dame to suffer its sixth loss of the season. The Indians have now only won two of their last five games.

The Bulldogs fell to Ft. Zumwalt North 6-3 in the finals after coming up with marginal wins over Cape Central, 11-1, and Festus, 10-4. Notre Dame defeated Windsor 5-4 before facing Ft. Zumwalt North.

The Indians started the invitational with wins over Twin Rivers, 13-0, and finally Sikeston at 6-3 before falling to Ft. Zumwalt North 11-10 and Windsor 10-9.