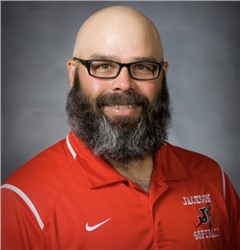 The Jackson softball team has not won a district championship in nearly two decades, but the Indians new head coach Shawn Wilding hopes that can change with him at the helm.

Wilding, who has officially taken over for former Jackson head coach Josh Roach, served as an assistant coach for Jackson over the last two years. Previously, Wilding was the head coach at Silex High School, where the team won two state championships during his time on the staff.

“It’s a great honor [to take over as head coach] because Josh Roach put together a great program,” Wilding said. “He brought me along to help build the foundation for a good program — our goal was to get a district title. I’ve developed a great rapport with a great, young group of girls in my minimal time here of three years. It’s a tremendous opportunity.”

Wilding has 13 years experience of coaching softball and has a vision of what a successful softball program should look like. He served 10 years as an assistant coach for Silex before being the team’s head coach for three.

Wilding did not have the intention to coach softball when he arrived at Jackson, but he said Roach was able to talk him into it in 2017. When Roach, who is moving out of state, announced his resignation, the returning players for Jackson told Wilding, “You have to be it.”

This past season, Jackson was able to win the regular-season SEMO Conference title and finished with an overall record of 14-9 after being defeated by Northwest in the district semifinals.

Key returners for the 2019 season will include seniors Sierra Burch and Morgan Conklin along with sophomore Karli Johnson.

Burch served as Jackson’s designated hitter this season, but Wilding sees her playing third base while Conklin will continue to lock down short stop. Burch and Conklin each finished with a batting average over .400 (.438 and .415 respectively).

Johnson became the Indians ace pitcher this year, finishing 8-1 overall with 54 strikeouts and an earned run average of 2.14. Another returning pitcher for the Indians will be Katelyn Carter, who went 3-2 and had 12 strikeouts this year.

Other returning starters include Ashlyn Prince, Alli Gartman, Miranda Carnell, Molly Martin and Ainsley Watson. Prince and Gartman each recorded more than 25 hits last year and scored 20 or more runs. Prince saw time on the rubber as well by finishing 2-1 overall and had 19 strikeouts.

The duo of Carnell at second base and Conklin at shortstop in the middle of Jackson’s defense is one of the best Wilding said he has seen as a coach. He also said any first-year head coach would “love to have this amount of talent.”

“My big thing in teaching a program is not just winning titles, but we’re teaching young ladies to be successful in life,” Wilding said. “[We want them to have] that confidence to look life in the face that’s already going to judge them for being a woman — we still have that unfortunate thing. We want them to say, ‘No, you’re getting the best person for this job. You’re getting my best.’”

One of the keys to achieving this will be buying in to the mudita philosophy Wilding picked up from Alabama football head coach Nick Saban, which is the Buddhist word for celebrating other successes like your own. Wilding said players have a tendency to do this on good teams.

“Why our teams at Silex were successful is because the girls knew their job,” Wilding said. “If they failed then they were going to be the biggest cheerleader for the girls that steps up infront of them. If they are a right fielder and on the bench and the other right fielder makes the play, that’s the loudest cheerer for her.”

Wilding believes this can be the glue that will bind Jackson together next season, if the players follow it. This will start with accountability during practice.

“It has to be competition, competition, competition at practice — they have to be in pressure situations all the time,” Wilding said. “When they step into a district game — this is another game. You have to take the labels off of it, and that’s what proper preparation does. With the championship teams I’ve been a part of, we’ve always kept the pedal down, and I can’t do that for these girls.”

One aspect of coaching softball Wilding enjoys the most is the energy girls bring to the sport during games because they celebrate every play, even if it’s just a routine ground ball.

“It’s an accomplishment — it’s all the hard work they put in to know how to field that ground ball,” Wilding said. “If it’s something clutch, they’re out of their shoes. The energy is so great on teams, and that’s what [I love about this sport].”