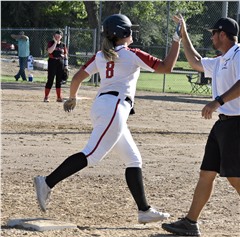 Last season, the Jackson softball team won its first district tournament game since 2013 by defeating Fox in the first round.

Head coach Josh Roach hopes his team can build off that success by going even further in the tournament this year.

“It was good to make that step,” Roach said. “We had a good group of girls last year, and we lost some big pieces, but the girls we have coming up — we have a lot of young talent coming up.”

One of those players who Jackson lost to graduation was pitcher Sicily Johnson, who went 10-4 last year with an earned run average of 2.75 and 53 strikeouts as the team’s ace.

Coach Roach said this year’s team has shown chemistry early on. He and the staff are working on building a winning culture in the program, so having such a young nucleus of players could prove to be beneficial for the program.

“We have a really good developmental program with one of the travel teams around here that’s kind of our feeder program,” Roach said. “They’re teaching the girls the right way to play softball, and we’re starting to see those girls roll into the program.”

The Indians started the season by traveling to Sullivan for a tournament, where they finished 1-3 overall.

Jackson won the first game of tournament play over Branson 7-3 as sophomore Katelyn Carter earned the win in her first start.

Roach said there will be a core of around four players to take the rubber this season.

“They all throw the ball well,” Roach said. “We’re not going to throw the ball by many people, but they throw a lot of strikes and can get a lot of girls out. I think the difference this year is we have a really good defense behind us.”

Joining Conklin and Cutsinger in the infield will be freshman second baseman Miranda Carnell, who Roach believes is a special talent.

Roach said this year’s outfield is the fastest he has had during his time at Jackson, which is led sophomore center fielder Alli Gartman in her second year as a starter.

With players like this on defense, Coach Roach has preached to his pitchers that they don’t have to try to be perfect.

Another starting pitcher for Jackson this season will be junior Ashlyn Prince, who is currently 1-0 with an ERA of 3.82 and a team-high 14 strikeouts.

Prince picked up her first win of the season against Perryville in a 6-2 affair through seven innings as she recorded 13 Ks.

Prince also tripled against the Pirates with a fly ball to center field to send three runners home.

Carter is 2-0 after earning her latest win over East Prairie, where she threw eight of her 10 strikeouts this season.

In the game against East Prairie, senior Sierra Burch hit two balls out of the park for four runs batted in.