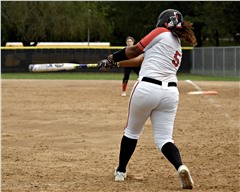 Freshman pitcher Karli Johnson advanced to 8-0 overall with the win with seven strikeouts, bringing her season total to 54.

“This is the first time in at least seven years, and it may have been a little longer than that [since we have won the conference],” Coach Roach said. “It’s always good to win that — we get bragging rights for a year, and it’s a good confidence booster for the girls.”

Cutsinger recorded her fifth home run of the season against the Bulldogs for the final two runs of the game. The Indians have recorded a total of 12 this season with junior designated hitter Sierra Burch behind Cutsinger with four of her own.

Freshman Miranda Carnell has added two homers herself with 19 RBIs as Cutsinger leads Jackson with 24 and Burch behind her with 20.

“I knew going into the season that offensively we should score a lot of runs, and we have,” Roach said. “We have a lot of power in our lineup — we have several girls that can drive the ball out of the park. It’s exciting to watch because when they’re on, it just seems like they’re hitting the ball all over the place.”

Currently seven of the team’s starter have a batting average over .300 as Cutsinger and Burch are hitting over .400 at .471 and .421 respectively.

Three more batters are hitting over .350 for the Indians, starting with Prince at .394, junior shortstop Morgan Conklin at .386 and lead-off hitter sophomore center fielder Alli Gartman at .371.

Jackson will host this year’s Class 4 District 1 Tournament and has secured the No. 3 seed. The Indians will take on No. 2 seed Northwest (14-8), which they have yet to face this season.

“I’ve had a really good group of girls that have worked really, really hard this season,” Coach Roach said. “We’ve had a lot of goals this year, and we’ve obtained a lot of them. It’s been through their hard work and determination.

“They’ve really bought in to what we were trying to go for this season. Right now we’re excited about getting into the district tournament, and we’re excited we won conference.”

Roach said when he first found out his team would have home-field advantage in the tournament he was “super excited” because it’s an opportunity for the program to show the pride it has.

Northwest managed to defeat both opponents as it took down Windsor 8-3 on Sept. 12 and Seckman 6-3 Sept. 17 both at home.

“I’ve gotten a little bit of a scouting report on [Northwest], and I feel like we match up really well,” Roach said. “I think they’re going to be really similar to Seckman.  If Karli continues to throw like she has and with our offense, I think we’re really hard to beat.”

Coach Roach said one of the reasons why his team fell to Seckman was because his team’s pitching staff was struggling.

Johnson started her first game of the season the week before in Jackson’s 16-1 blowout over Saxony Lutheran Sept. 4.

“[Johnson] has not really been a surprise because she started out with our JV team early in the season,” Roach said. “I knew she was good — I just didn’t know how good she was. I was watching her in JV and saw that she was throwing the ball really well.

“She has a lot of composure and a lot of poise way beyond her years. For only a freshman she’s been able to handle several very intense games and situations.”

Johnson has since become the team’s ace while recording a team-best earned run average of 1.47, but she has allowed a team-high 49 hits through 57 innings pitched.

An aspect Roach believes boots his pitching staff’s confidence is the caliber of the team’s offense, which has scored 137 runs and recorded 198 hits so far.

“It alleviates a lot of pressure on whoever is pitching because they don’t have to be perfect,” Roach said. “They know we’re going to score runs and our offense keeps us in games.”

Behind Johnson is sophomore Katelyn Carter as well as Prince, who have combined for a record of 4-3 overall with 29 strikeouts.

Another player in the pitching rotation is Carnell, who has pitched in four games this year with an 0-1 record by allowing 14 hits, five runs and has four strikeouts.