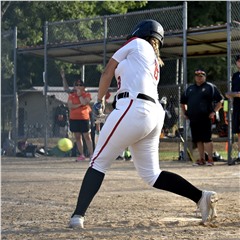 One year after the Jackson softball team captured the SEMO
Conference regular-season championship, the Indians have a new face at the helm
this season.

Shawn Wilding officially took over as Jackson’s head coach this
offseason after the team’s now former head coach Josh Roach stepped down from
the position.

Wilding had served as an assistant under Roach for the past two
seasons, and will be trying to instill a winning atmosphere into the program.
He helped coach two state championship teams while he was an assistant coach
for Class 1 Silex in 2006 and 2012.

Jackson’s final game of the 2018 season was in the Class 4 District
1 Semifinals, where the team fell to Northwest 13-8.

Coach Wilding has been able to find players to replace those two
spots as senior Sierra Burch is slated to start at third base after mostly
being Jackson’s designated hitter in 2018.

While Cutsinger was last year’s leader in batting average for the
Indians at .441, Burch was right behind her at .438 while finishing with more
hits (26) and home runs (six). Burch also paced her with 26 runs batted in and
18 runs scored.

“She’s been hitting in the four-hole with leadoff hitter Alli
Gartman, Kylie Darrow and Ashlyn Prince infront of her — she should put immense
RBIs up,” Wilding said. “She’s got protection behind her in Miranda Carnell,
but she’s going to see a lot of good pitches. We’re keeping her focused on what
makes her successful and driving the ball and hitting the ball hard.”

Senior Ashlin Prince will take over first base duties this season
after spending last year in right field. She batted .392 with 29 hits, 20 runs
and 18 RBIs last year.

Taking over right field for Prince will be sophomore Kylie Darrow,
who Coach Wilding said is a player who eats, drinks and sleeps softball. He
also describes Darrow as “the rabbit that the greyhounds chase.”

“In 2006 when we won the state title at Silex, we started three
freshman over juniors and seniors,” Coach Wilding said. “We won a state title
because those girls pushed the upper girls to get better.”

Returning as the leadoff hitter is junior center fielder Alli
Gartman, who led the Indians in stolen bases with 23 as well as hits at 30 last
year. She also recorded a batting average of .375 and scored a team-high 29
runs.

One of the younger players who Coach Wilding mentioned has matured
over the offseason is none other than sophomore second baseman Miranda Carnell,
who was one of Jackson’s seven batters to record 20-plus hits last year. She
had 22, while batting .310 and drove in 21 runs and scored 18 of her own.

The fifth and final batter returning to have recorded 20-plus hits
last season is senior shortstop Morgan Conklin with 27. She finished with a
.415 batting average and scored 15 runs.

“We can put football scores up — we can put up double-digits every
night as long as we execute,” Coach Wilding said. “It all starts with the top
[of our rotation]. It’s dangerous.”

Wilding said Carnell and Conklin make for one of the best interior
defensive infields he’s ever coached.

Returning to the pitching staff is sophomore Karli Johnson, who
finished 8-1 overall with 54 strikeouts and a 2.14 earned run average on the
mound as a freshman. She had to deal with a minor injury over the summer, but
Wilding said she looks stronger than ever.

“Determination is in her eyes after that Northwest game,” Coach
Wilding said. “That was a game that was bigger than her, and she didn’t get to
pitch a competitive high school game last year. I felt like she didn’t pitch
ever with anything on the line — a first-place pressure situation.”

Wilding expects Johnson to be Jackson’s locomotive this year, and
he know she’s ready to be the team’s leader by noticing a different look in her
eyes.

Joining Johnson in the pitching staff will be Carnell and junior
Katelyn Carter in the No. 2 and 3 spots. Carter finished 3-2 overall last year
with 12 strikeouts in 36.1 innings pitched. Carnell only pitched 10 innings as
a freshman, where she managed to record four strikeouts and a 2.1 ERA.