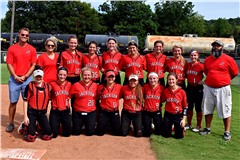 The Jackson softball team was one win shy of reaching its
first tournament championship game of the season this weekend, but the Indians
were still able to place third in the Sullivan Tournament.

Jackson (7-3) defeated Owensville 10-7 in the third-place
game on Saturday after falling to tournament host Sullivan 4-3 that morning.

Jackson was down 7-1 heading into the bottom of the fourth
inning when Watson came up big for the Indians with a 2-run triple to narrow
the scoring gap. The Indians scored four more runs in the inning with 1-run
singles by senior right fielder Abby Gates, junior center fielder Alli Gartman
and finally Prince to tie the game.

Jackson took the lead in the next inning as Gates was able
to send senior shortstop Morgan Conklin home on a fielder’s choice to make the
score 8-7.

Insurance runs were scored by sophomore left fielder Kylie
Darrow and Prince in the bottom of the sixth inning to help secure the win.

Sophomore pitcher Karli Johnson picked up the win as she was
on the rubber for 6.1 innings with six strikeouts while allowing five runs off
eight hits.

Jackson also defeated the likes of Linn 4-3, Osage 16-1 and
Kelly 14-2 as both Conklin and Prince recorded home runs in the tournament.

“These girls continue to amaze me in this beautiful position
of being their head coach I have the honor of being chosen for,” Jackson’s
first-year head coach Shawn Wilding said. “We are now 7-3 — already half the
wins of last season. More importantly, they have learned this weekend and this
whole season that it is not the size of the dog in the fight — it is the size
of the fight in the dog. They can achieve anything they want if they fight for
it.”

Heading into the Sullivan Tournament, the Indians defeated
crosstown rivals Cape Central 15-0 last Wednesday on the road. Johnson finished
with a perfect game as she allowed no hits or walks with two strikeouts through
three innings pitched.

Carnell finished with a game-high three runs while also
coming up with two hits and two runs batted in. Senior third baseman Sierra
Burch led Jackson in RBIs with three off a line-drive single in the first
inning. She also scored two runs of her own.

Burch currently leads the Indians in several offensive
categories, which include batting average (.467), hits (14) and RBIs (12).

Five other batters for Jackson are also hitting with an
average of .400 or better as Conklin and Prince pace Burch with a .433
percentage. Prince and Conklin are tied for the second most hits (13).

Conklin and Prince are the only two Indians to have hit a
home run this season as Morgan leads Jackson with two. Both players also have
10 RBIs, while Prince has scored the third most runs with 10.

Leading the Indians in runs is their leadoff hitter Gartman
with 12, who is currently batting .290 with nine hits and a team-high 11 stolen
bases.

Behind Gartman in stolen bases for Jackson is Darrow with
five. Darrow has a batting average of .296 with eight hits, 11 runs scored and
five RBIs.

The three other batters hitting .400 for Jackson is Carnell,
Watson and junior designated hitter Molly Martin. Carnell is third on the team
in hits with 12 and is tied with Prince for the third-most runs at 10. She also
has nine RBIs.

Watson has came up with 10 hits thus far along with nine
RBIs, while Martin has eight hits, six runs and three RBIs.

The Indians have out-scored opponents 81-28 through 10
games, while the team’s defense has recorded a fielding percentage of .914 with
a total of 17 errors.

Burch has recorded the most errors at five with this being
her first year starting at third base. Starters Darrow and Watson have not
recorded any errors yet.

Jackson hosts Farmington this afternoon and will get back
into SEMO Conference play next week against Poplar Bluff and Notre Dame.