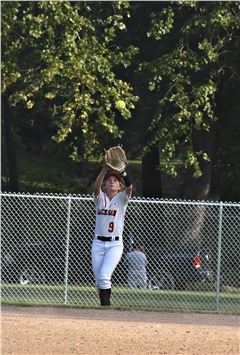 After coming out of the Sullivan Tournament with only one win to start the season, the Jackson softball is now 3-4 overall thanks to two, 10-plus run wins last week.

The first win for the Indians came on the road against East Prairie with a 12-0 win over the Eagles on Tuesday, Aug. 22. This was thanks to a near perfect day from senior Sicily Johnston on the mound.

Johnston pitched a complete game through five innings while only allowing three hits and walking two batters. She finished with a total of 11 strikeouts in the shutout.

Offensively, junior Jayna Cutsinger had a team-high .667 batting average as she hit a single and a double while scoring two runs and batting one run in.

Senior Allison Carnell drove in two runs off a grounder in the third inning, who was later drove in by Johnston for Jackson to take a 4-0 lead over East Prairie.

Carnell later scored again in the fifth and final inning off an error for the Indians 11th run of the game.

Two days later on Aug. 24, Jackson hosted Perryville for its first home game of the year with Johnston getting the nod at pitcher once again.

Johnston pitched a complete game while allowing six hits, three runs and one walk in the Indians 13-3 win over the Pirates.

Johnston has now started a total of four games for the Indians and is 3-0 thus far. She has struck out a total of 18 batters while only walking six through 24 innings.

Carnell and fellow senior Maddie Dye each had a .600 batting average in the game with Carnell recording a season-high six RBIs on three singles.

Dye has the highest batting average for Jackson right now, .450, while also having team highs in hits [nine] as well as runs [10].

With Carnell’s six RBIs against Perryville, she is the only Indian with more than 10 thus far and has a .400 batting average with eight hits and seven runs.

The Indians were down to Perryville 3-0 after the first two innings, but with two on and two outs in the third, Cutsinger was able to send freshman Alli Gartman home on a single for their first run.

Jackson scored three more runs in the fourth inning to take the lead, thanks to Carnell singling the ball to center field for two runners to advance all the way to home plate.

The bottom of the fifth innings is when the Indians took a commanding eight-run lead, which began with a solo home run by sophomore Sierra Burch.

Carnell was able to bat in her final two runners on two outs when she singled on a fly ball for junior Libby Brakhane and Maddie Dye to cross home plate.

Carnell scored Jackson’s 10th run on her own after Cutsinger drove her in on a single to left field.

The Indians then get a week off from playing before they host Farmington (2-2) on Sept. 6 and Rockwood Summit five days later to conclude the home stint.