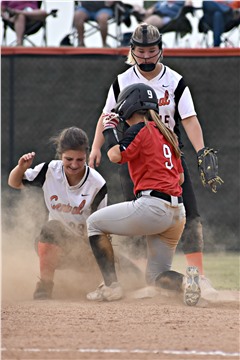 Starting Wednesday, district tournaments all across the state for softball will begin with the first round of play.

Jackson is set to face Fox, which is hosting the Class 4 District 1 Tournament this year. The Indians fell to Fox last season 6-5 in extra innings in this very round for their 2016 season to come to an end.

Saxony will be traveling to Kelly, which is also the No. 1 seed in the Class 2 District 3 Tournament, to go against Twin Rivers (3-15). The Crusaders defeated Twin Rivers 7-2 in the regular season on the road.

For Notre Dame, the Bulldogs will play the winner of Cape Central (6-18) versus Sikeston (7-12) in the semifinal round of the Class 3 District 1 Tournament. Notre Dame has faced both teams and defeated them handedly at 16-0 each.

Six Bulldogs currently have a batting average of .400 or better with senior outfielder Alex Lovell leading Notre Dame with a .514. Lovell also leads the team in hits at 38 and is tied with sophomore first baseman Grace Lemons and senior outfielder Gracie Friga for most home runs at two.

Leading Notre Dame on the rubber is freshman pitcher Hailey Kutz, who has a pitching record of 15-1 overall with an earned run average of 1.381 and 122 strikeouts through 96.1 innings. Kutz even threw a perfect game against Sikeston on Sept. 11 where she had seven Ks.

Senior outfielder Maddie Dye and senior pitcher/infielder Sicily Johnston are close to batting .400 at .395 a piece, and Johnston currently leads the Indians in home runs with four.

Dye leads Jackson in runs scored with 27, and is also second in stolen bases with 13.

Leading the team in stolen bases is freshman outfielder Alli Gartman, who has 17. Gartman is hitting .278 right now, but is third on the team in runs at 23 with Cutsinger (27) and Dye (24) leading her.

At the mound, Johnston has started 13 games for the Indians this season and has an overall record of 9-4 with a 2.250 ERA and 48 strikeouts.

Cutsinger has started seven games on the rubber for Jackson and is 2-2 overall with an ERA of 2.864 and 20 Ks.

Each championship game will be held on Friday starting after 4 p.m., and Notre Dame is looking for its seventh-straight title game appearance.