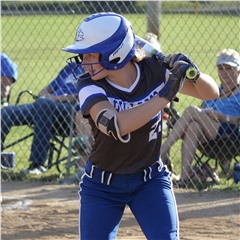 After coming up short of winning the Class 3 District 1 Championship for the fifth-straight time last year, Cape Notre Dame’s softball team won the SEMO Conference Championship, earned the top seed in the district tournament and only suffered five losses to finish the 2019 regular season.

Notre Dame capped off its perfect season in conference play at 8-0 with a dominant 18-0 win at Kelly last Thursday. However, the Bulldogs fell to the same team that ended their season last year the game before to Perryville 9-6 Wednesday at home.

Notre Dame was able to gain the top seed in this year’s district tournament, though, by defeating No. 2 seed North County 14-9 on Sept. 18, which defeated No. 3 seed Perryville 10-5 Sept. 24.

The Bulldogs offense has averaged more than 10 runs per game in 2019, thanks to top hitters like seniors Kristen Barwick and Riley Burger, junior Halle Heuring and freshman Ainsley Burnett.

Heuring is also only three hits away from breaking Notre Dame’s single-season record of 55 set by Brianne Sanders in 2010. She is tied for second right now with Erika Reinagel at 53.

Burger, who is the Bulldogs’ leadoff hitter, is right behind Heuring with 51 hits, so she is one hit away from tying the third most in Notre Dame’s single-season history of 52 set by Mallory Sieber back in 2009.

Burger is on pace to break two single-season records for the Bulldogs herself as she only needs to score one more run to break the record of 51 set by Summer Burger in 2011. Heuring is second behind Burger in runs with 43.

The other record Riley could break this season is the single-season stolen base record, which she set last season at 44. Burger has 37 right now and is averaging more than one stolen base per game heading into districts. Her season-high in one game is five when Notre Dame defeated East Carter 10-0 earlier this month on Oct. 4.

Burger also has a batting average of .537 and three home runs, while Burnett is the third and final Bulldog hitting over .500 at .526. Burnett also has 50 hits along with a team-high four home runs and 47 runs batted in.

Behind Burnett for the second most RBIs for Notre Dame is Barwick with 42, who currently has a batting average of .400 with 40 hits and two home runs.

Leading the Bulldogs on the mound is none other than junior Hailey Kutz, who is 20-5 overall with 106 strikeouts and a 2.81 earned run average.

Notre Dame will face the winner of Fredericktown (5-14) versus Sikeston (9-12) tomorrow afternoon in the district semifinals.