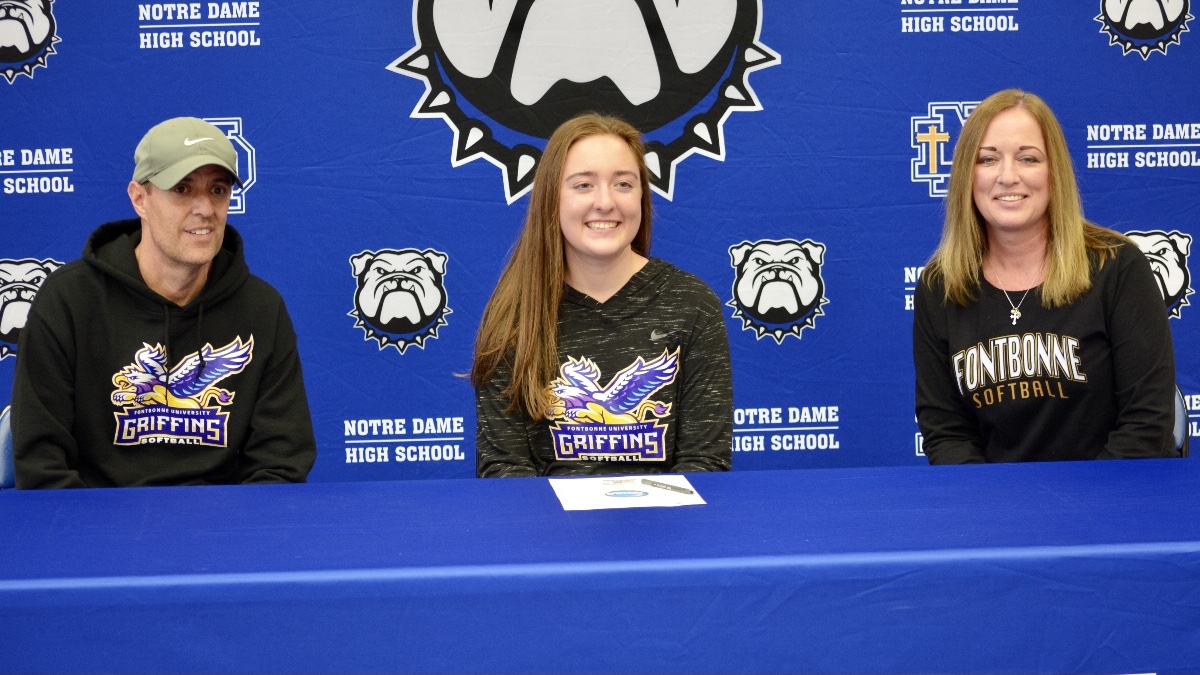 One of the best pitchers to ever come through the Notre Dame softball program, senior ace pitcher Hailey Kutz, will continue her career collegiately to no one’s surprise after signing with Fontbonne last week.

Kutz finished her career as a Bulldog with a pitching record of 71-12 overall as she struck out a total of 468 batters through four seasons as the team’s ace. In that span, Notre Dame won three district championships and finished as the Class 3 state runner-ups in 2017.

Fontbonne has been on Kutz’s radar ever since she attended a camp at the school two years ago, where she was not only able to tour the campus but also met the team’s head coach Casey Cromwell.

Kutz instantly clicked with Coach Cromwell and fell in love with the campus, so add all of that up with the fact that the program wanted her to play there, and Kutz knew Fontbonne was the right fit for her.

Prior to her illustrious career with the Bulldogs, Kutz first began her career on the diamond when she was around five years old. It wasn’t until Kutz was 11 that she finally took the rubber and started pitching.

Kutz, who is left handed, became a pitcher mainly because being a lefty made it more difficult for her to play other positions on defense. Kutz also joked and said she’s not “the most athletic person in the world.”

“My dad and I practice [pitching] almost every single night, and ever since then I’ve gotten better,” Kutz said. “I played rec ball back when I was 10, and he needed a pitcher on his team. He was like, ‘Hailey, you need to learn how to pitch.’ So I started from there, and I liked it. I like to be a part of every play in the game, and I like the feeling of playing with my friends and winning.”

During these workouts with her father, Kutz throws 25 fastballs while trying to record as many strikes as possible. Kutz then focuses on other pitchers like her changeup and riseball, and depending on what kind of shape she’s in, she will throw 10 to 25 fastballs after that.

Even though training so much can become tiresome, Kutz said pitching nearly every night has helped her in the long run. What Kutz is proud of improving the most over the years has been her changeup, which is an off-speed pitch thrown to look like a fastball but arrives at the plate much slower.

“My changeup was not very great my freshman year, and changeup is really one of the most important pitches because it throws the batter off their balance a little bit,” Kutz said. “I’ve always had a natural spin on the ball, so that’s been probably my most helpful aspect. Striking someone out is probably my favorite part of softball. I don’t bat, but I assume it probably feels like getting a really good hit.”

Other areas Kutz has improved in over her four years at Notre Dame is playing defense as well as her overall knowledge of the game, thanks to the Bulldogs head coach Jeff Graviett and assistant coach Ray Reinagel.

Thankfully at the start of her freshman year in 2017, Coach Graviett decided to bring Kutz along to the team’s first varsity tournament. It paid off for them both as Notre Dame’s pitchers went down with an injury in the tournament, which made Graviett put Kutz in.

The rest is history as Kutz helped lead the Bulldogs to play in the Class 3 State Championship game, where they fell to Monett 4-1. Kutz finished the season 20-2 overall while recording a career-high 178 strikeouts and only allowed an average of 1.55 runs per game.

“It was crazy,” Kutz said. “Freshman year, I guess I didn’t really understand the work behind reaching a state championship game like I do now. I wasn’t as nervous as I probably would’ve been if we had made it there this year. I had a lot of good seniors behind me who helped me a lot that year, too. It was a honor to play at state, and it’s really hard to make it there as everyone knows.”

The 2017 Class 3 state title game would be the only one Kutz played in her entire high school career, but she still managed to help Notre Dame win back-to-back district and SEMO Conference Championships in her final two years as a Bulldog.

As a sophomore in 2018, though, Notre Dame’s four-year streak of winning a district title ended as it fell to Perryville 6-5 in the district semifinals. The Pirates went on to win districts before falling to Hillsboro in the sectional round.

Kutz finished with a record of 9-3 that year as she only produced 54 strikeouts with an earned run average of 4.25. She also only threw 70.2 innings as she shared pitching duties with Allison Lynch, who took the rubber for 69.2 innings and went 6-5 with 44 Ks and a 3.31 ERA.

As a junior, Kutz and the Bulldogs got their revenge as they defeated Perryville 4-3 to reclaim their throne as Class 3 District 1 Champions while finishing with a record of 27-6. The season came to an end in the quarterfinals as Notre Dame lost to Incarnate Word Academy 12-7.

Kutz won a career-high 23 games with only two losses her junior year while bringing her strikeout total back to over 100 at 120 and finished with an ERA of 3.03.

In her final season, Notre Dame was moved up two classes due to MSHSAA’s new championship factor, but that didn’t stop Kutz and the Bulldogs from winning a second-straight district title.

Notre Dame defeated conference rival Jackson for the third and final time this fall, 6-3, for the Class 5 District 1 Championship. The Bulldogs then fell to Marquette 7-6 in extra innings of the quarterfinal round as the Mustangs then lost to eventual Class 5 State Champions  and undefeated Rock Bridge 5-1 in the semifinals.

Notre Dame finished 2020 25-3 overall as Kutz only suffered one loss on the year along with picking up 19 wins, striking out 116 batters and recording a 1.59 ERA.

“My career here was great,” Kutz said. “Notre Dame is a really great team. We have really great coaches, who are amazing and have taught us so much. The group of seniors I’ve spent my four years with has been great, too, and everyone this year and throughout the years. Everyone is just so talented, and we work together so well and that’s why we’ve gotten so far.”

Before Kutz begins her college career, she will be playing for the Stars Elite 18U over the summer. Kutz describes this team as a college showcase team since all the players have either signed or committed to play college softball somewhere.

Kutz is looking to major in medical lab science at Fontbonne since she’s always enjoyed the field minus “the gross parts of it,” that come with being a surgeon or nurse, she joked. “I’ve always thought it’s interesting to work with medicines and stuff. My dad is a pharmaceutical rep, and he talks about medicine stuff all the time.”