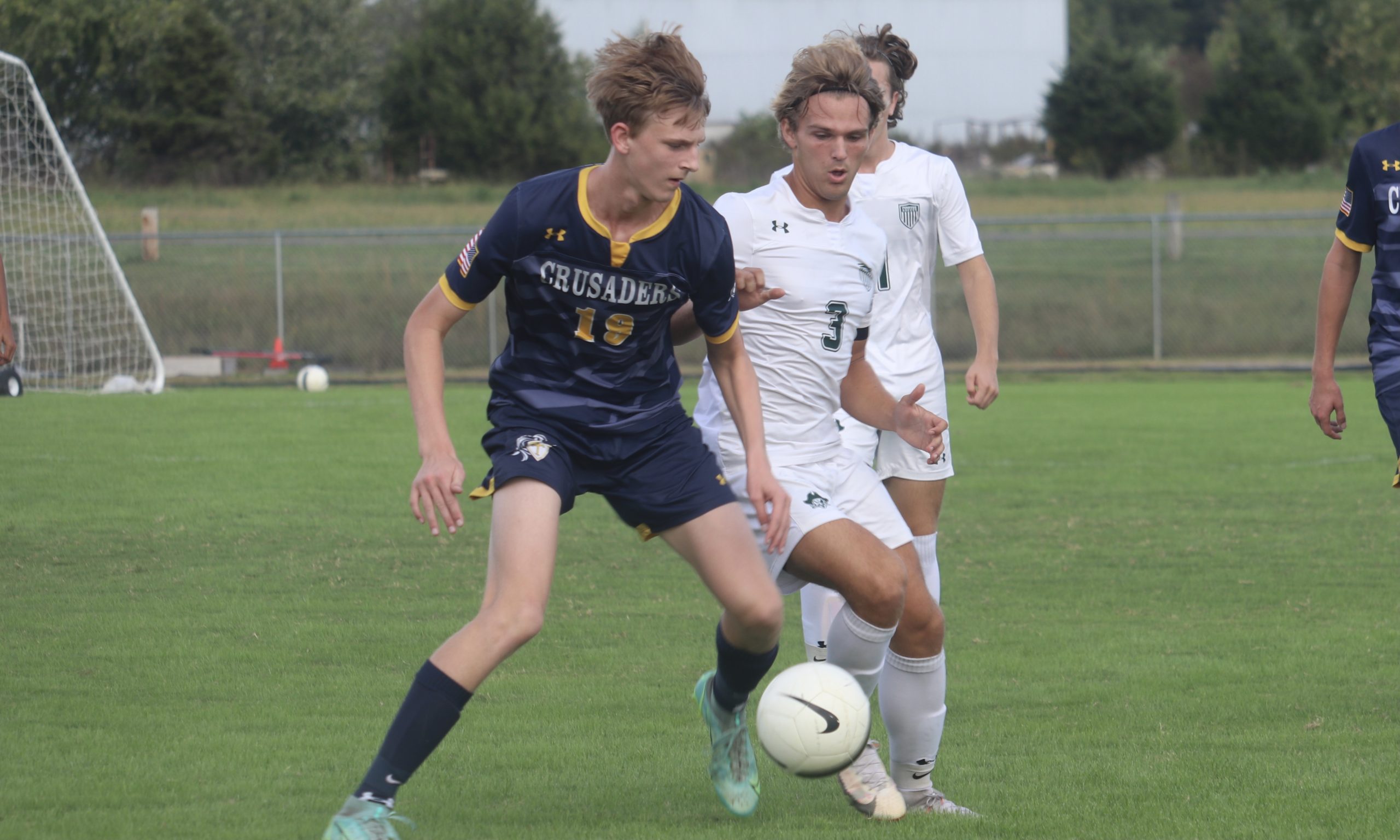 Last week, the Saxony Lutheran boys soccer team unfortunately suffered its fourth loss in a row, but the Crusaders happened to face four of the top-ranked teams in the state during that span.

Saxony then faced another ranked Class 3 team in No. 11 Cape Central (9-2-1), which they fell to by one goal at 3-2. Luckily for the Crusaders, though, they compete in Class 2 and are currently ranked No. 8 overall.

However, one of the teams in Class 2 District 1 along with Saxony is also in the Missouri Soccer State Power Rankings, which is No. 2 Perryville (13-1).

These two teams faced off last week in what was a close contest to no one’s surprise, but the Pirates were able to come out on top over the Crusaders by scoring two unanswered goals in the second half for a 2-1 win.

“We’ve played some of the best teams in the state — our schedule is absolutely loaded,” Saxony head coach Chris Crawford said. “We’ve been punched in the mouth quite a few times before, and we know we can get back into the game.”

In the first half against Perryville, the Crusaders were able to take a 1-0 lead 25 minutes into the match as junior Max Richey found sophomore Luke Eggemeyer with a corner kick for the goal. This was Eggemeyer’s fourth goal of the season (fourth on team) and Richey’s ninth assist (second).

“We talk all the time that set pieces win games, especially in the postseason. That goal kind of had a postseason feel to it,” Coach Crawford said. “There was a scrum in the middle and Eggemeyer found it and put a foot on it.”

The majority of Saxony’s shots on goal came in the first half as the team had two more on throw-ins while Richey had one six minutes before he connected with Eggemeyer for a goal. The Crusaders leading scorer junior Jace Boland also had a shot attempt in the first half off a header in the 11th minute.

Boland has totaled a team-high 43 points by tallying 16 goals and 11 assists, while Richey paces him with 35 as he has recorded 13 goals on top of his nine assists.

Unfortunately, the Crusaders only had one shot on goal in the final 40 minutes, which came in the 75th minute off a free kick by junior Paul Kaufmann. Kaufmann is tied in fourth for most points with 12 (two goals, eight assists) as Eggemeyer has four assists on top of his four goals.

Saxony’s third-leading scorer junior Michael Hasz (18 points; six goals and six assists) had a chance of making a shot attempt in the final minute off a throw-in, but he was beaten to the ball by the Pirates senior goalkeeper Ty Baudendistel.

“If Hasz can get his toe on it, that goes in the goal, but their goalie was right there. It’s kind of a heavyweight matchup when we get together with Perryville,” Coach Crawford said.

Trouble came for the Crusaders following the first 10 minutes of the second half when Perryville was able to score two goals within two minutes. The Pirates recorded a total of seven shots in 11 minutes as Saxony’s junior goalkeeper Aaron Zoellner, who has made 76 saves this fall, saved most of them.

Perryville’s first goal was scored by senior Bryce Brewer at the 54-minute mark with the second coming from fellow senior Dayton Strattman in the 56th minute. Strattman is currently the Pirates leading scorer with 77 points (28 goals, 21 assists, while Brewer paces him at 61 (25 goals, 11 assists).

“For 70 minutes, we played a good game. We lost our brains for 10 minutes there after halftime, and they took advantage,” Coach Crawford said.

This year’s district tournament that is scheduled from Oct. 30 to Nov. 3 will be hosted by Perryville. Coach Crawford is looking forward to a possible rematch with the Pirates, which would likely be for the Class 2 District 1 Championship.

“A lot of these guys played together growing up, so there’s that rivalry in itself,” Crawford said. “Then there’s the Saxony-Perryville rivalry that’s a natural, regional rivalry, so when you play a rival in the district final — there’s going to be fireworks, and it’s going to be fun. I hope we can get there, and I hope they get there so we can get another crack at them.”