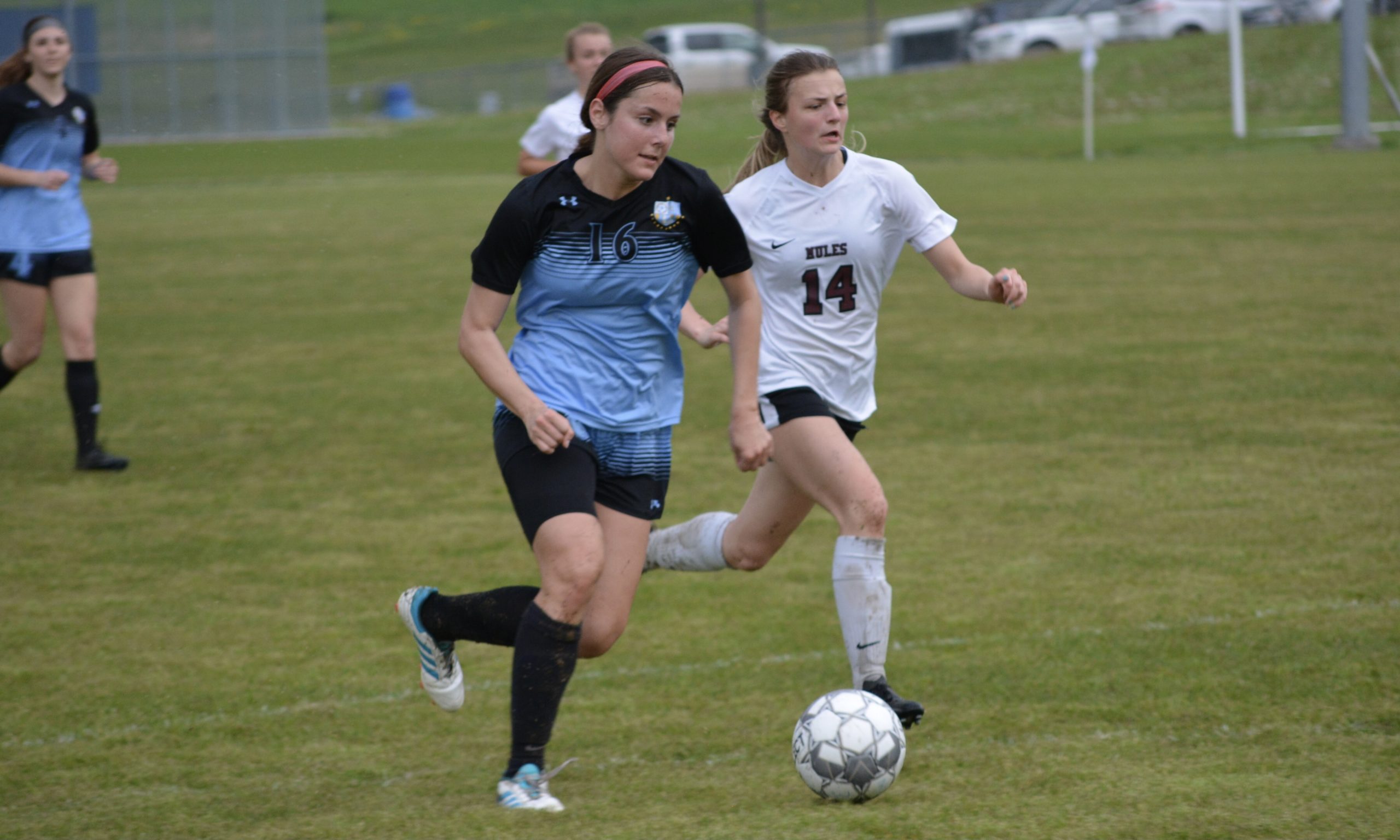 After having not one but three-straight games postponed due to inclement weather, the Notre Dame girls soccer team returned to action last week and recorded back-to-back shutouts.

The Bulldogs (7-3-1) played their final game against SEMO Conference opponent Poplar Bluff as Notre Dame tied its second-high scoring output of the season with six goals. Scoring half of the Bulldogs goals was none other than senior forward Allie Buchheit.

Buchheit, who helped Notre Dame win a Class 2 State Championship as a freshman, scored her first goal in the second minute of the match. This goal came off an assist by fellow forward freshman Addison Clippard, and she actually headed the ball to Buchheit for the score.

The final two goals that Buchheit came up with she put in the back of the net within the first 10 minutes of the second half. Overall, Allie had four more shots on goal outside of that as the Bulldogs outshot the Mules 18-1.

“Offensively, we have a lot of new players because we lost one of our main forwards from last year’s team Hannah Miller,” Buchheit said. “Addison Clippard has done a good job stepping up, and we’ve got two new outside mids. They do a really good job of working hard.”

“Mya Shaffer is one of our center mids, and she’s a beast,” Buchheit said. “She never stops working.”

Bulldogs senior goalkeeper Isabel Knaup recorded her lone save of the match in the 45th minute. This was Notre Dame’s fifth shutout of the season as the Bulldogs were also able to keep Carbondale, Marion, Saxony Lutheran and Sikeston scoreless through 80 minutes of action. Leading the Bulldogs defense are players like senior Kathryn Taylor, junior Kristin Anderson and freshman Skylar Craft.

One of the main reasons why Notre Dame beat Poplar Bluff so handedly was because of how much the Bulldogs had possession of the ball throughout the match. Buchheit said possession is something she and her team work on a lot during practice, but she also credits this year’s team chemistry.

“We focus a lot on team bonding and positivity, so I really think that plays a role in the games,” Allie said. “At the beginning of the season, it was rough because we had to replace so many players. We just have fun at practice, and Coach [Ryan] Schweain makes sure we do. We’re working hard, but we always make sure we’re out here to enjoy it and compete.”

For a player like Buchheit, this is only her third season of high school soccer since she lost her sophomore campaign due to the coronavirus pandemic. While COVID didn’t take away her junior season, it was a year where Allie was plagued with a quad injury.

Despite that, Buchheit played through the pain and helped lead Notre Dame to finish as the Class 4 District 1 runner-ups with an overall record of 16-3.

“Last year, I took a hit with my quad, and it was really hard to shoot,” Buchheit said. “I kind of got pretty mental about it, but I did a lot of rehab and working out over the offseason. I feel like that’s really helped me to be able to put the ball in the back of the net this year.

Besides her ability as a goal scorer, Buchheit has also stepped up for Notre Dame by being more of a vocal leader and making sure players are in the right position this season. Allie said this is just something that comes with being a senior.

After Buchheit helped Notre Dame make a third-straight, state-title game appearances and win its second state championship in three season, the Bulldogs had to move up two classes due to MSHSAA’s success multiplier, which was first instilled last year and only affects private schools. Notre Dame is once again in the same district as Jackson this season, which the Bulldogs fell to by only one goal earlier this year.

“It’s been really hard moving up two classes because we’re playing schools whose freshman class size could be the size of our entire school,” Buchheit said. “The 1-0 loss to Jackson this season was tough, but I think we’ve improved a lot since then and know what we need to work on to get there.”

One way Buchheit has improved her own game during the course of her high school career is by learning from the likes of former Bulldog forwards like Megan Heisserer and Hannah Miller, who are both now playing college soccer at Southeast Missouri State and Kaskaskia, respectively. In her spare time, Heisserer — a two-time Class 2 Player of the Year selection — has returned to Notre Dame as an assistant coach.

“It was amazing coming into my freshman year with Megan Heisserer — she’s such a good teammate and player,” Buchheit said. “She’s always been so nice and welcoming, so having her back out here as a mentor and friend has been an incredible experience.”

Buchheit laughed and admitted that it’s been a strange transition from being teammates with Heisserer to now having her as a coach. Nonetheless, Allie said Megan does an outstanding job coaching the team and teaching everyone what to do.

“I’ve learned from her to always be positive because my freshman year, I’m sure it wasn’t easy for her playing with a freshman up top,” Buchheit said. “Whenever I made a mistake, though, she was always so positive and never got upset. That’s one thing I really admire Megan for is always being positive, so I try to embody that when I play, too.”