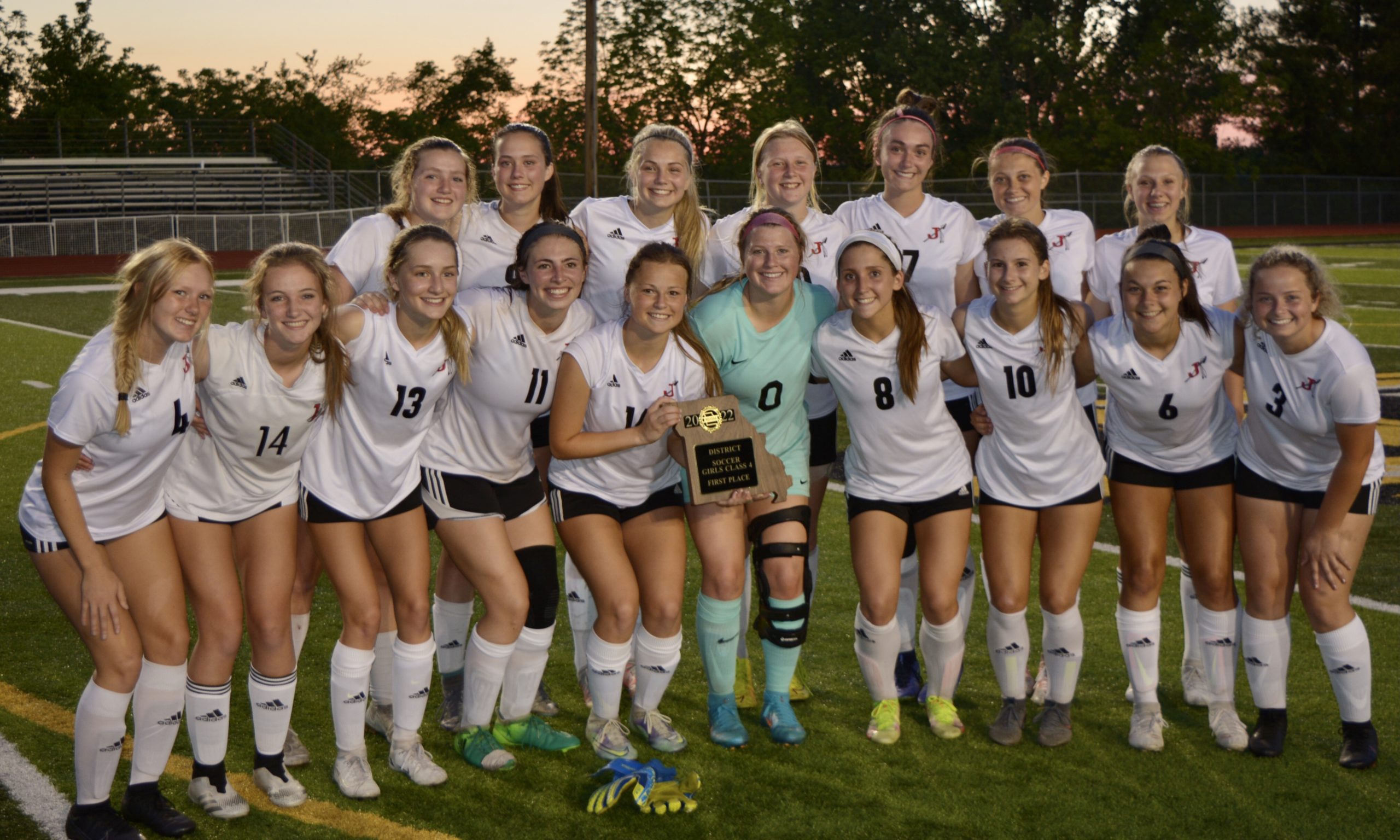 The Jackson girls soccer team poses with the Class 4 District 1 Championship after defeating Oakville 2-1 in double overtime on May 18 at Oakville High School. Photo by Nick McNeal

The only entity that prevented the Jackson girls soccer team from winning a district championship over the last six years was not a team. It was the coronavirus pandemic, which canceled the 2020 spring season.

Other than that, the Indians (17-3) have now won five district titles in a row with their latest coming in a 2-1, double-overtime win over Oakville (12-7-1) for the Class 4 District 1 Championship last Wednesday night.

“I’m so happy for our kids,” Jackson head coach Justin McMullen said. “Those two teams that played for the district championship were almost identical in the way we play. It was a battle tonight, and I hate to use that word, but both teams really, really laid it on the line.

“I’m really happy for our program because it was a game we knew was going to be very difficult going in. Oakville is well coached and that was a good game.”

Scoring both of Jackson’s goals happened to be freshman Rilee Monighan, who scored her first goal with a header off a corner kick by junior Justi Nelson in the 18th minute of action.

Monighan’s second and final goal of the night — the golden goal — came in the final four minutes of double overtime. Rilee’s shot attempt rolled beneath the arms of Oakville’s goalkeeper, who was able to touch the ball but not enough to secure a save.

“I’m really excited — I’m really happy for myself,” Monighan said. “Overtime was really nervewracking, but we just had to keep our heads up and keep going. At the end I really just kicked the ball and said, ‘Make it in there please.’”

Monighan is just one of the several underclassman who have stepped up for Jackson this season, along with other Indians like sophomores Olivia Klinkhardt, Maggie James and Lauren Marchi, and freshmen Maya Domian and Mia Becker.

Monighan scored one of Jackson’s three goals for a 3-1 victory over Lindbergh in the district semifinals. It was Nelson, who is currently second on the team in goals scored with 14, that scored the Indians other two goals.

Leading Jackson in goals this spring has been senior Abbey Klund, who has produced a team-high 19 along with seven assists through 20 games thus far. Pacing Klund and Nelson in goals is Klinkhard, who is the only other Indian with double-digit goals at 12.

Also coming up big for Jackson to secure another district title was senior goalkeeper Brooke Gerau as she recorded multiple saves throughout the match. Outside of making routine saves, Gerau showed off her skills as a goalie by making several acrobatic catches and deflections to keep all but one ball from reaching the back of the net against the Tigers.

“My adrenaline was high, and I was kind of out of breath most of the game from going back and forth, but it was fun,” Gerau said. “Most of the games I’m bored, and I get a little distracted with my thoughts. This game, though, I was in it the whole time, and that’s fun to me. That’s why I like soccer.”

Brooke admitted that she has anxiety before games and hopes that matches don’t reach overtime or penalty kicks, but she gains confidence quickly for most matchups by simply recording a save.

Gerau has been nothing short of crucial during the Indians last two district-championship runs as she’s recorded 29 saves in her career as a starter. Brooke’s first year as Jackson’s starting goalkeeper would’ve been 2020 had it not been for the pandemic.

“Winning two of those last five district championships means a lot because even though we had a setback year with COVID, that didn’t stop us,” Gerau said. “We picked up right where we left off. … All of us seniors have been playing together probably since we were seven-years-old, so we have that connection.

“We know how to play together, and then with the underclassmen we make one big family. There’s no tension on the team — everyone loves each other, and they love to play for each other. It’s a really bond.”

This spring, defenders senior Caroline Rivenburgh and junior Emilia Wunderlich have anchored the backline for Jackson. Rivenburgh had a save of her own near the end of the first half after Gerau made a save, but the ball bounced away from her. This left the ball near Jackson’s goal, however, Rivenburgh booted it away before any player from Oakville could come up with an attempt.

“If they accidentally kick the ball the wrong way or miss the ball, I’m there behind them going to pick up the ball. We just play together really well.”

Plays like this helped the Indians secure a 1-0 lead over the Tigers heading into halftime as Jackson kept them scoreless through the first 66 minutes of play. Oakville’s lone goal in the match came from an attempt that was 30-plus yards out and made it in the top-left corner.

Gerau, Klund, Nelson and Rivenburgh were each rightfully selected to the Class 4 District 1 All-District Team following the tournament.

Jackson will now face off against the No. 2 ranked team in Class 4 Nerinx Hall (19-2-1) in the quarterfinals with a trip to state on the line this Saturday at Nerinx Hall. Nerinx Hall is also coming off a 2-1 double-overtime in its district final, which was against Lafayette (18-4-1).

The Indians haven’t made the state final four since 2018 back when they made it for the first time in school history and finished fourth overall.