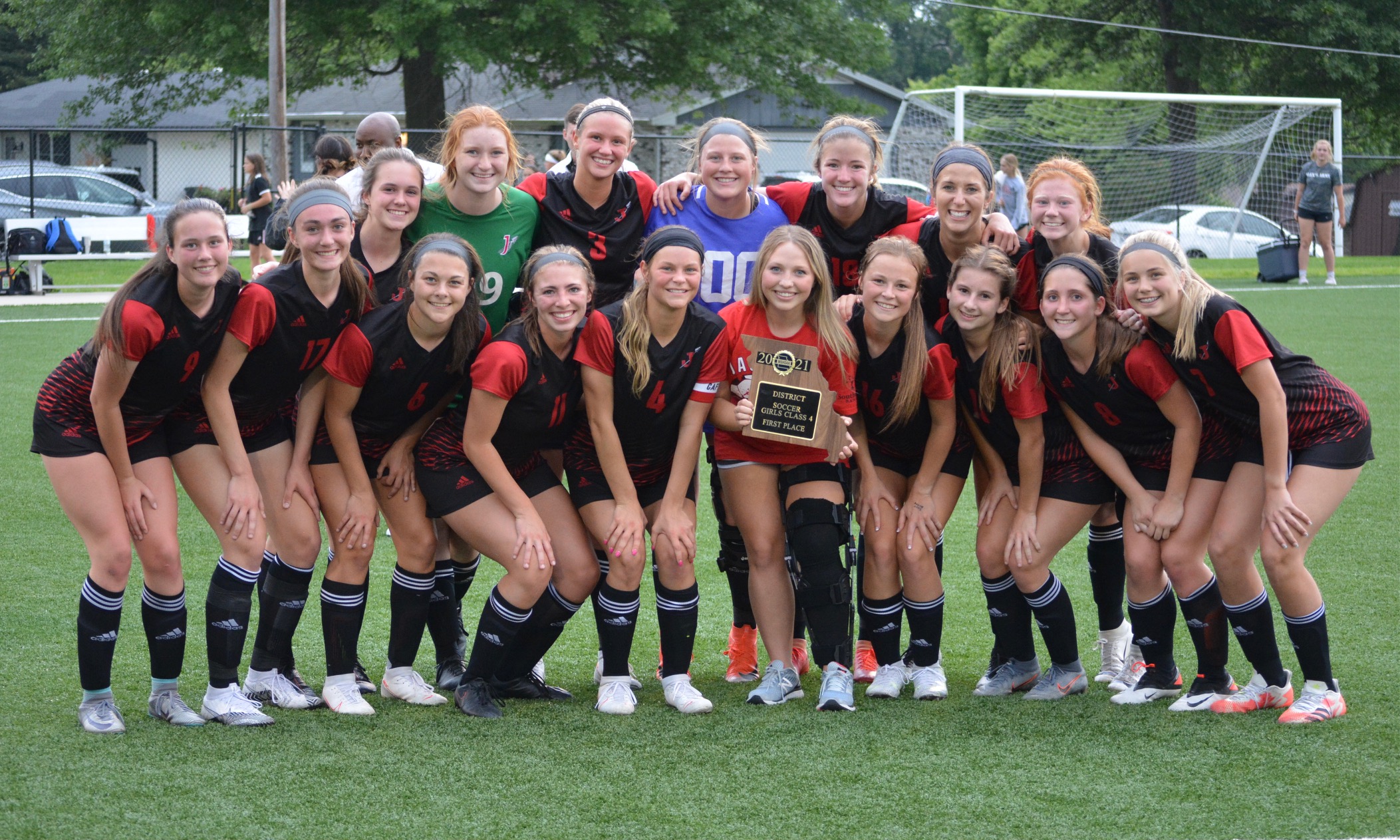 The Jackson girls soccer team wasn’t able to defend its three-year streak as Class 4 District 1 Champions last season due to the coronavirus pandemic cancelling the 2020 campaign, but a season off didn’t change anything for this program.

One week ago from today, the Indians hosted crosstown rival Notre Dame in the district final as they came away with a 2-0 shutout of the Bulldogs. Scoring the game-winning goal was freshman forward Olivia Klinkhardt off a corner kick by senior forward Katelyn Miller in the 38th minute.

Neither team had been able to get off a shot on goal all game until that minute on a corner kick play. Days before the game, Jackson head coach Justin McMullen instilled the game-winning play based off of how Notre Dame defended those shots when these teams first played this season on April 5.

“We knew their goalkeeper was going to be very aggressive, so we tried to counter that with [Klinkhardt],” Coach McMullen said. “We gave up some opportunities on corner kicks the last time we played them.

“We knew we were going to have our fair share of corner kicks just by the way we play and they play, so that was something we knew in a game like this that we had to capitalize.”

Coach McMullen noted that his team is “banged up,” so he was pleased by several of his players who showed a lot of heart by playing through the pain.

“We talk about courage and things like that all the time,” McMullen said. “You tape your ankle up and things like that, but I told them, ‘You have to be courageous in certain moments.’ Both of these teams know each other really well and a lot of those kids grew up playing soccer together. It was a really tough challenge tonight, and I’m just fortunate we were on the right side of it.”

The Bulldogs senior goalkeeper Caroline Lochmann did come up with multiple saves through the match, though, and didn’t allow another goal until the 66th minute. Lochmann had tried to make a play on the ball, but it bounced in favor of Jackson senior forward Brooke Thompson. She was able to then score the insurance goal the Indians needed to put the game away.

“I can’t say enough about someone like Brooke Thompson,” Coach McMullen said. “Ivy Guilliams goes down a couple weeks ago, and Brooke comes out and shows she’s very capable of stepping in and playing big time like that. I was really happy with the way Brooke played tonight, but she’s been doing that for the last two weeks.”

Despite being shutout, the Bulldogs were able to record several shots and nearly had a scoring opportunity in the first 20 minutes.

This was when junior midfielder Allie Buchheit tried to cross pass to senior forward Hannah Miller, but the ball was just a bit out of reach for Miller. The only thing between Miller and the goal would’ve been junior goalkeeper Brooke Gerau had the pass gotten to her.

However, Gerau didn’t have to defend a type of shot like that, so she and Jackson’s defense ended up recording its 17th shutout through 21 games played this season. The Indians last three games have all been shutouts after they suffered their second loss of the year to Whitfield at 2-1 on May 10.

“We added that [Whitfield] game late, but it was good for us to see a team like that,” Coach McMullen said. “We learned about ourselves in that game, so it kind of showed tonight.”

Outside of Gerau in goal, Jackson’s defense is led by backline defenders seniors Kate Emmendorfer and Olivia Ward and sophomores Caroline Rivenburgh and Maci Wendel.

“Olivia Ward and Kate Emmendorfer do a great job back there as seniors,” Coach McMullen said. “ Leadership is something that for this team in particular is the reason why we’re here.”

The Indians now move on to the sectional round as they will face off against Class 4 District 2 Champions Cor Jesu, which won the title by beating Fox 4-0 and has also won its last three matchups via shutout.