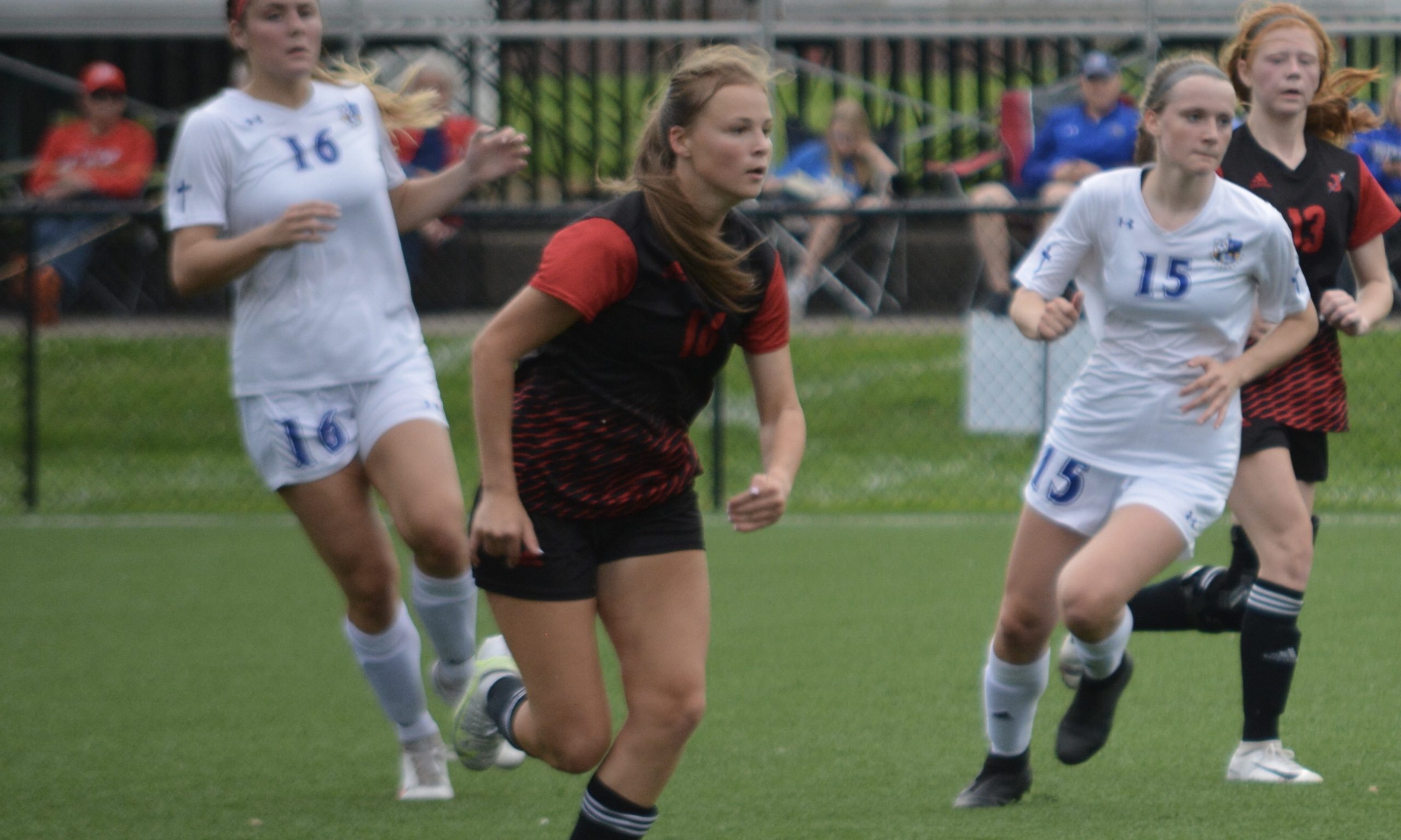 Senior midfielder Caroline Rivenburgh scored the first goal in Jackson’s 9-1 win over Helias Catholic on the final day of the Jackson Showcase Saturday at home. Photo by Jay Forness

In the second season of the Jackson Girls Soccer Showcase, the Indians finished undefeated yet again as they first defeated Marquette, 2-1, Friday and lastly Helias Catholic, 9-1, Saturday.

“People come and see someone like Justi Nelson score 12 goals with 12 assists from last year and maybe want to key in on her,” Jackson head coach Justin McMullen said. “She’s been off to a hot start this year, but I think you saw today in particular that we have some other ones that can step in and score some goals.

“We’re dangerous in a lot of positions offensively, but we just have to be more fluent there. I’m really happy to see today, though, that we definitely have some other players that can score.”

Nelson did, however, produce both of the Indians goals in their win over Marquette, and she scored two of the first three against Helias. Justi currently leads Jackson with five goals as she only produced one in a 10-0 shutout of Kelly to start the season.

Even though Jackson’s defense gave up goals in back-to-back contests, veteran senior goalkeeper Brooke Gerau recorded six saves versus Marquette and has one shutout under her belt already. The Indians defense, which is also led by returning starters like juniors Emilia Wunderlich and Maci Wendel, recorded 16 shutouts last season.

Nelson’s second and final goal against the Crusaders was quite impressive since she was being guarded by two defenders. Despite this and with the Helias goalkeeper right in front of her, Nelson kicked the ball right between the keeper’s feet for the score.

“Justi will be the first one to tell you she has some things to work on,” Coach McMullen said. “We have to get her head up and be able to see when there are too many defenders. Certainly any time she gets the ball, she’s in a dangerous position to take players on. That’s a luxury to have for us.”

Outside of Nelson, Indians senior midfielder Abbey Klund also scored multiple goals in their showcase as she produced back-to-back in the second half. One came off an assist from sophomore forward Lauren Marchi, while the other was unassisted.

Klund moved up and played forward for her final goal of the match, so she’s a player Coach McMullen will have all over the field this season because of her diverse skillset.

“We’ve had the mentality that Abbey was going to play a lot of defense for us, and that’s still an option,” Coach McMullen said. “But we also know that Abbey is capable of playing in the midfield and even up top for us if we need her. She’s a very versatile player for us, but it’s been nice to see her get her first couple of goals this season.”

Nelson also delivered a corner kick that was right on the money for sophomore forward Olivia Klinkhardt, who headed Justi’s pass for Jackson’s fourth goal against Helias.

“In general, we feel like we have a lot of girls that can actually head the ball this year, which in the past has been a little bit of a struggle for us,” McMullen said. “We worked on that a little bit earlier in the week as far as our connection up top.

“We feel like we have about four of five girls who can do what Klinkhardt did. That was a great goal there — you couldn’t draw that up any better for them.”

Jackson’s first goal of the contest was also off a corner kick, but it wasn’t as easy. The ball bounced off a few players and away from the goal, but senior midfielder Caroline Rivenburgh was in position to boot it into the back of the net.

In the season opener, Rivenburgh tied for a game-high two goals with freshman midfielder Maya Domian while also having one assist. Caroline also dished out an assist to Nelson in Jackson’s victory over the Mustangs.

The Crusaders answered this goal with less than six minutes to go in the first half as freshman midfielder Alaina Meyer scored off a corner kick in the 35th minute.

The Indians answered Helias’ lone goal of the game five minutes into the second half as freshman midfielder Maya Domian scored the third goal of her career off a free kick.

Domian is one of the many first-year starters for Jackson, and Coach McMullen has been nothing but impressed by her and several others.

“Maya Domian is someone that’s versatile for us and will play a couple positions, and against Helias she was with Caroline Rivenburgh,” McMullen said. “They have some chemistry going in the midfield for us. Rilee Monighan is another one we’ve put in the back and has done a good job for us.

“I think we’ll have some growing pains — it’s not all going to be like it was this weekend, and we understand that. We’re going to have to be a little more patient as well because we know we’re going to be in situations where those players don’t have experience being in.”

Monighan scored the final goal of the game for Jackson, as senior defender Emma Shields scored the Indians goal prior to that.