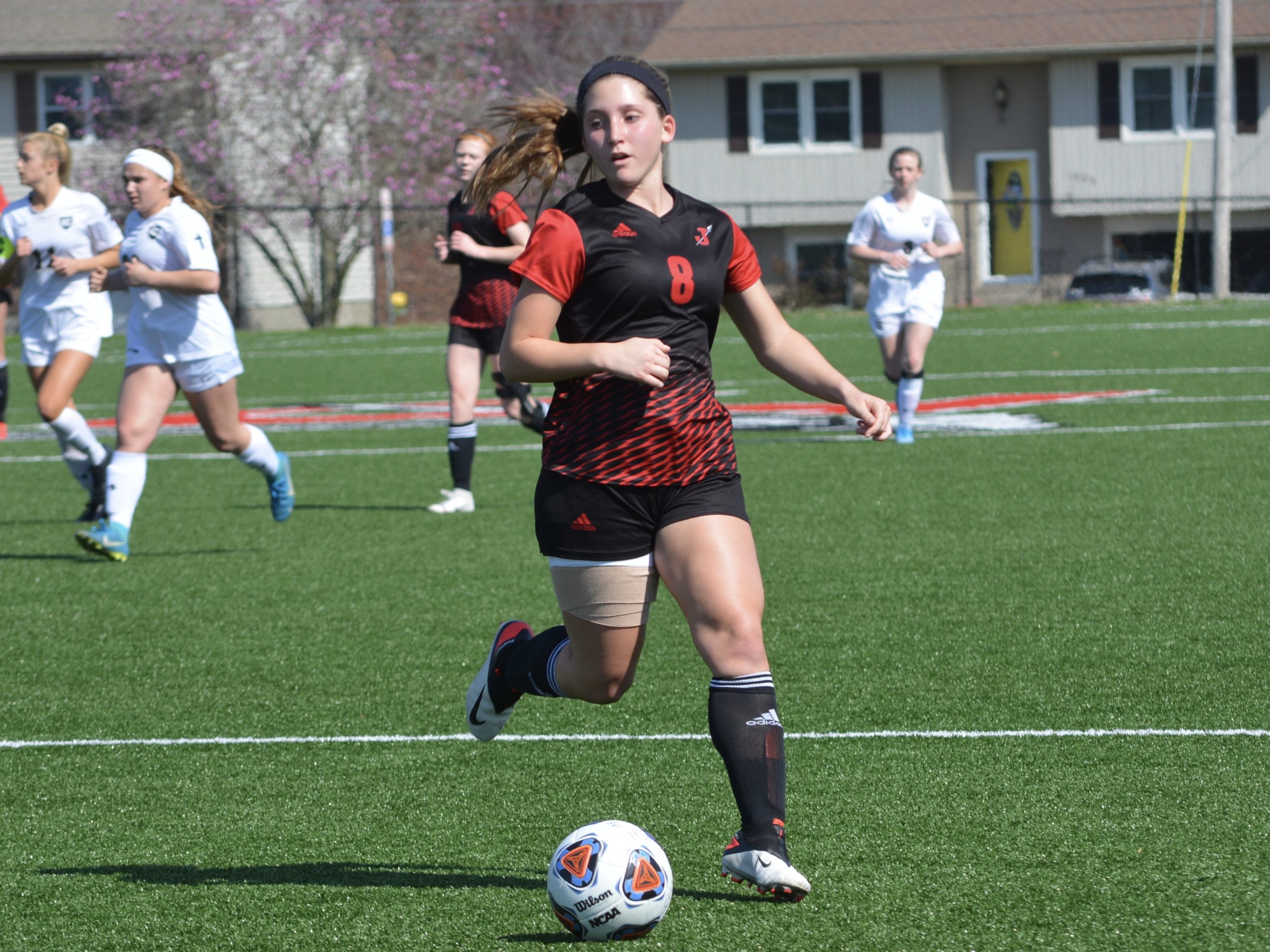 Jackson junior forward Abbey Klund scored the Indians lone goal in their 2-1 loss in penalty kicks to Cor Jesu on Tuesday, May 25, at home. Photo by Jay Forness

For the fourth season in a row, the Jackson girls soccer team was able to reach the sectional round in Class 4 after winning yet another district championship.

However, the Indians were unable to win the match and advance to the quarterfinals like they did back in 2018 and reached the final four for the first time in school history.

It was a scoreless affair through the first 40 minutes until the Indians drew first blood two minutes into the second half. This was off a corner kick by sophomore forward Justi Nelson, who sent the ball that was found by junior forward Abbey Klund for the goal.

Jackson wasn’t able to hold on to the lead for long, though, as the Chargers answered Klund’s goal 10 minutes later. This was off a goal by Cor Jesu sophomore midfielder Ana DiMaria, who went one-on-one with Jackson junior goalkeeper Brooke Gerau to score the goal and tie the game 1-1.

Following that goal, Gerau anchored down and finished with double-digit saves as she didn’t allow another ball to go into the back of the net until it was time for penalty kicks. Most of Gerau’s saves came against Cor Jesu’s junior forward Emery Schlueter, who often zig zagged past Jackson’s defense for shots.

“[Schlueter] gave us some fits, but I thought we did a pretty good job as far as limiting her opportunities,” Jackson head coach Justin McMullen said. “She got several of them late that kind of made me cringe a little bit, but overall defensively I loved the way we played all year.”

The Indians nearly answered the Chargers one minute after their goal on another corner kick, but Cor Jesu’s defense managed to keep the ball out of the back of the net.

In the first overtime period, the Chargers had possession for a majority of the 15 minutes and had three shots on goal all saved by Gerau. Two were attempts from Schlueter as the other was a header by senior midfielder Jacqueline Nieters.

Gerau had a few more saves in the second overtime to prevent a golden goal, while Jackson freshman forward Olivia Klinkhardt recorded a shot on goal. The Indians started the final overtime period with momentum after keeping the Chargers scoreless.

“The defense in front of Gerau has limited opportunities all year,” McMullen said. “Tonight was one of those things where they were able to create some things offensively, and Brooke showed you what kind of player she’s capable of being.”

This Class 4 Sectional matchup was ultimately decided in overtime as Cor Jesu outshot Jackson 4-2. The Indians first attempt hit the left crossbar, and their fourth shot went over the top of the goal while the Chargers didn’t miss a single kick.

Even though Jackson fell short of reaching state this spring, it still came away with the SEMO Conference and Class 4 District 1 Championships.