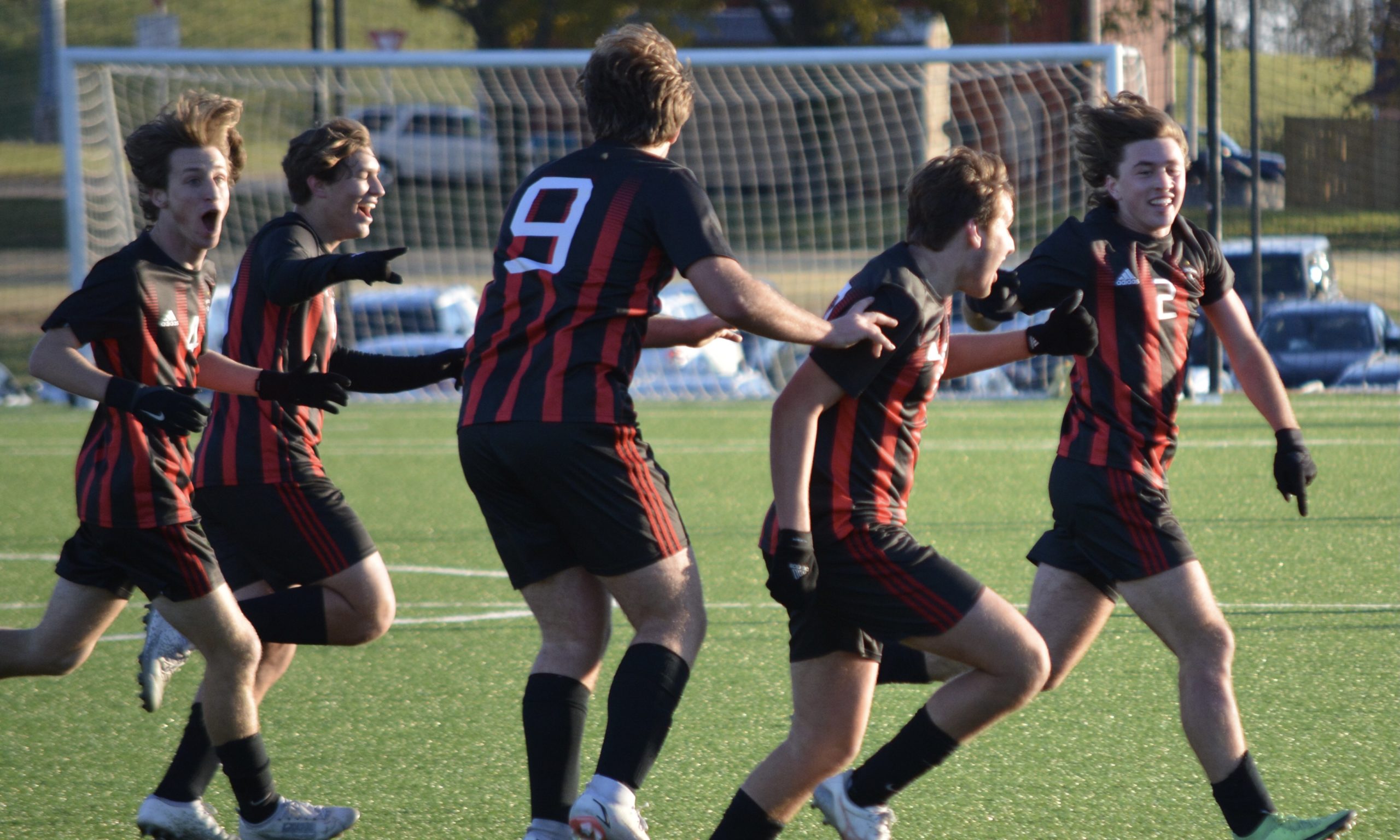 Members of the Jackson boys soccer team celebrate after beating Marquette 1-0 in overtime of the Class 4 Quarterfinal on Saturday at home. Photo by Jay Forness

Saturday marked another year where the Jackson boys soccer team made school history as the Indians did so in a Class 4 Quarterfinal matchup with Marquette that was scoreless after the first 80 minutes of action.

The lone goal of the game wasn’t scored until there were 29 seconds left in the first and final 15-minute overtime period.

Coming up with the golden goal was Jackson senior midfielder Mason Grindstaff, who found the back of the net against a Mustangs senior goalkeeper Collin Nowotny that had made numerous saves throughout the match. Nowotny even took a ball to the face in the last 20 minutes of the second period.

“In that moment [we scored], we’re trying to get the ball in the box one more time. We’re harping on the kids to get it in the box and get an opportunity,” Jackson head coach Zack Walton said. “It gets difficult when there’s pressure on kids, and I thought our boys stepped up and did a nice job there.

“Mason is a big, strong midfielder and great player for us. We talked before the game a little bit about how this game could come down to him. Sure enough it did, and he took that opportunity and hit a good ball. I would liked to have seen him shoot a few more times, but we’ll take that one.”

Marquette finished with several shots on goal in the match but failed to produce any in overtime as Jackson was able to maintain possession for most of the final 15 minutes.

“It just goes to show you had two really good teams out there battling all the way through. Both sides had opportunities to score during the game,” Coach Walton said. “Both keepers did an outstanding job keeping the net clean. It came down to a big play and thank goodness our boys did it.

“Mason did it, and he’s very capable of hitting the shot. Man, I’m so excited for these boys. They worked really hard, so to see them never give up and keep going at it is enjoyable as a coach. Anytime you win, it just puts a big smile on the coach’s face.”

This goal punched the Indians ticket to their second-straight and second-ever Class 4 Final Four appearance after winning it all in 2020.

Making crucial saves and securing the ball for his 11th shutout of the season was Jackson senior goalkeeper Nolan Dry, who also recorded shutouts in the district quarterfinals and semifinals. Dry had big shoes to fill this season as he was replacing 2021 graduate and former all-state goalie Luke Mirly.

“Nolan Dry played outstanding. There were a couple big opportunities they were about to have, but he just punched the ball away like it was nothing,” Coach Walton said. “The kid played really well. Goalie was a big question mark for us this year, and he’s definitely stepped up and filled that hole for us. That’s one of the reason why we’re going back to the final four is because of those guys on defense and our keeper.”

Applying pressure offensively were the usual suspects for Jackson such as senior forwards Chalon Domian, Wil Essner, Deonta Blair and Kaivre James as well as Stowe. On top of winning multiple 50-50 balls, Blair nearly recorded what would’ve been a game-winning goal in the 84th minute.

“Our forwards battled all game long and came back to help play defense. I don’t know how many times Deonta won a ball — just unbelievable,” Coach Walton said. “All around, we had great effort and a great game.

Stowe had the shot on goal that Marquette’s goalie Nowotny saved with his face back in the second half, and he also delivered multiple corner kicks for Jackson. Two of Stowe’s corners came in the final 20 minutes as Jackson managed to have three in a row but were unable to convert on any.

“We had some good opportunities to score there, but their keeper and defense did a great job of keeping their net clean as long as they could,” Coach Walton said. “That made for a fun and intense game.”

The Indians (18-7-2) enter this year’s final four as defending state champions and will face Blue Springs (15-8) in the semifinals on Friday at the World Wide Technology Soccer Park in Fenton.

The winner will either take on John Burroughs (17-6-1) or Rockhurst (22-2) for this year’s Class 4 State Championship Saturday evening.