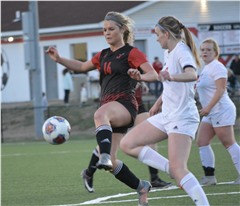 There were a total of 20 players named to this year’s SEMO All-Conference girls soccer team, with 12 selected to the first team and eight earning honorable mention.

Cape Notre Dame, Jackson and Saxony Lutheran combined for nine of these players as the Bulldogs had the most of any team with four. Three players for Jackson were named, while the Crusaders had two.

Heisserer recorded a program-record, career-high 54 goals and 29 assists this past season as the Bulldogs won their second Class 2 State Championship in three years.

Another key reason to winning a state title was Notre Dame’s defense as Wilson and Williams helped the team record 16 shutouts, including one in the state final against Visitation Academy.

In addition to earning all-state honors for a fourth consecutive year, Heisserer was named the Class 2 Player of the Year for the second time in her career.

Three of these Bulldogs will be playing at the next level as Heisserer signed with Southeast Missouri State before the season. Tarno inked with Central Methodist, while Wilson signed with William Woods last month.

For the Indians, senior midfielder Mikala Liley and senior forward Natalie Miller were named to the first team. Liley and Miller combined for 44 of Jackson’s 74 goals and also had 26 assists between them this season.

Both Liley and Miller also earned Class 4 All-State accolades for the second time as Liley was put on the first team, while Miller earned second team honors.

The final player for Jackson to earn all-conference on the honorable mention team was senior defender Laura Bertrand. As one of the Indians center fullbacks, Bertrand helped lead Jackson to record 15 shutouts this season.

Being named to the first team for Saxony was none other than junior midfielder Emma Brune, who was the only junior on the first team. Brune managed to break her career, single-season high in goals with 35 this year along with dishing out 14 assists.

The second and final all-conference selection for the Crusaders was fellow junior midfielder Makayla Mueller, who finished third on the team in goals with three and paced Brune in assists at nine.

Both Brune and Mueller earned Class 1 All-State honors for the third time in their careers by being named to the first team. Brune was named the Class 1 Player of the Year for the third year in a row.