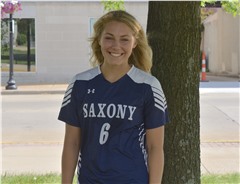 Saxony Lutheran sophomore Emma Brune was able to accomplish what no other player has ever done in the history of the two-time state champion girls soccer program, and that was being named the Class 1 Player of the Year twice.

Brune accomplished this feat as an underclassman by scoring a career-high 30 goals while dishing out another career-high 20 assists.

“That’s awesome [being the first Saxony player to win the award twice],” Brune said. “I didn’t even know that was a thing, but that’s cool.”

Brune did not win the award outright as she was technically named Co-Player of the Year along with St. Vincent senior Corin Carroll. The two shared the award last year as well.

It was a tough season for Brune as she explained she had to deal with injuries throughout the year. She was down on herself because of that, but Brune was still able to persevere for yet another historic season.

Brune, who became a two-time first team all-state and first team all-region selection, helped lead the Crusaders to finish with an overall record of 15-5-1.

“She was much more confident in herself and her teammates [this season],” Saxony head coach Chris Crawford said. “Last year, I think we had trouble getting all the talent we had together. It was kind of a long year, and this year they kind of all figured out how to play with each other.”

Saxony was ranked third in Class 1 in the final poll released by the Missouri High School Soccer Coaches Association without even making the state playoffs.

At the beginning of the season, the team had a meeting to discuss the shortcomings from the previous year as Crawford felt they had underachieved in a number of games.

In 2017, the Crusaders went into overtime four games in a row and lost three of those matches. Someone asked Crawford why that was, and he didn’t have an answer for them until he watched film.

“After the season, I sat down and watched every game we lost — all 11 of them — and our fitness was terrible,” Crawford said. “We lost most of those games in the last half, so that was a big component in our training this year was our fitness has to improve. Pretty much every day we ran even if we had a game the next day.”

Crawford said because of this his team’s fitness wasn’t an issue this year and it showed because three of Saxony’s five losses were only by one goal.

“Our team chemistry was so much better this year,” Brune said. “We all got along really well, we all motivated each other and we were all happy for each other. You could tell on the field that we all wanted each other to succeed.”

Saxony fell to St. Vincent once again in the Class 1 District 1 Championship, allowing the Indians to win their second-straight state championship.

“That was a tough loss — very tough,” Brune said. “It was hard to lose to them again, but it motivates us next year for sure.”

It was a much closer contest than last year’s district title game of 4-0 as the Crusaders only fell by one goal at 2-1 this season.

The winner of this game between Saxony and St. Vincent has now went on to win the state championship for the past seasons.

“I think maybe a day after we lost in the district final I had a text message from Emma saying, ‘When can we get back out and train?’” Crawford said. “That’s just the kind of worker she is, and I wish I could see I was surprised by that message, but I wasn’t.”

Crawford said he noticed throughout the season Brune was putting a lot of pressure on herself when it came to trying to score more goals.

He ended up pulling her aside to let her know she always didn’t have to score and could impact the game in other ways.

When Saxony faced Notre Dame on the road April 11, Crawford said Brune was “going nuts” trying to score a goal.

“I think I pulled her to the side and said, ‘You don’t have to score. Just impact the game,’” Crawford said. “She eventually did score, but it was just kind of reminding her she’s not the only goal scorer on the team. She had 20 assists still, which is a ton of assists. She does a lot of things.”

Heading into this season, one goal Coach Crawford had set for Brune was for her to become more comfortable in a leadership role.

Crawford noted Brune is not that much of a vocal leader but more of a player who leads by example.

“It’s not necessarily her personality to be very outgoing and want to have that spotlight on her — she hates it,” Crawford said. “The way she plays with as much effort as she uses — you can name any number of things and she does them all to the best of her ability.”

Brune agreed with her head coach by saying she doesn’t like being in the spotlight at all. She said she leads by working hard in practice and motivating her teammates.

Brune said she also had help leadership wise by fellow first team all-state senior Laurel Mueller along with the other seniors.

Brune said her competitive nature comes from growing up with her family. Her sister, Maddie, was the 2016 Class 1 Player of the Year and helped lead Saxony to a second consecutive state title.

Maddie is a starting defensive midfielder for Troy University, playing in the Sun Belt Conference. She also served as one of the team captains as a sophomore in 2017.

“[Maddie and I] push each other to be the best we can, and she’s my biggest supporter,” Emma said. “I get [my competitiveness] from my family. My family is just really competitive, and I hate losing.”

Brune said her focus for next season will be shooting and trying not to do too much by relying on her teammates.

In 2019, the Crusaders will be playing on a brand new field of their own instead of hosting at Shawnee Park.