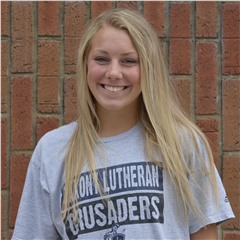 The Lutheran All American Association
officially announced its 2018-19 High School Soccer Awards last month as Saxony
Lutheran’s girls soccer team was one of the 200 Lutheran high schools in the
United States and Canada to be recognized.
Saxony was first honored as a team by
earning the Silver Team Ethics and Sportsmanship Award along with seven other
schools for having no red cards and no more than five yellow cards throughout
the season.
The Crusaders had four named to the
Lutheran All-American teams out of the 105 players selected as junior
midfielder Emma Brune was one of the 28 players named to the first team. Only
three other players from Missouri were on the first team.
The next two players were from Saxony’s
backline as senior defenders Etty Sotto and Cassidee Wunderlich garnered LAAA
Second Team All-American honors. Junior midfielder Makayla Mueller was the
final Crusader to be named a LAAA All-American as she was selected to the
Honorable Mention team.
Each player named All-American were
nominated by coaches and athletic directors for their high athletic, academic
and spiritual integrity.
All four of these Crusaders also earned
Class 1 All-District, All-Sectional and All-State honors this season, while
Brune and Mueller were the only players from Saxony named to the SEMO
All-Conference Team.
Brune was named the Class 1 Player of the
Year for the third-straight season by scoring a career-high 35 goals and also
had 14 assists. Before Brune, no player in Missouri girls soccer history had
ever earned Player of the Year three times. Brune was also named to the United Soccer
Coaches All-Central Region Team.
In this article: