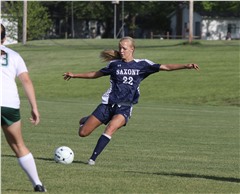 This was the second year in a row where the Crusaders fell to the Indians to bring their season to an end, but now the postseason honors are rolling in for Saxony.

Saxony had a total of nine players garner all-district honors with seven being named to the first team.

Leading Saxony in goals once again this season was the reigning Co-Class 1 Player of the Year Brune as she scored a career-high 30 along with another career-high 20 assists in 18 games.

Second in goals for the Crusaders was Laurel Muller, who managed to score 18 along with 10 assists in her final season.

Brune and Mueller were the only two players for Saxony to score 10-plus goals this year as four players finished tied for third with three goals a piece.

One of the four was Makayla Mueller, who was second on the team in assists with 11.

Fritsche was Saxony’s goalkeeper for all but two matches this season as she totaled 2,036 minutes in the net this season.

During that time, Fritsche recorded a total of 109 saves while allowing 25 goals. She also had a total of five shutouts.

The Class 1 Region 1 and Class 1 All-State teams will be released this week.

Brune, Fritsche, Laurel and Makalya Mueller were each named all-state in 2017.