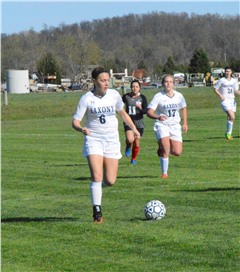 Following her freshman season with the Saxony Lutheran girls soccer team, Emma Brune was named the Class 1 Co-Player of the Year.

She earned this honor by scoring a team-high 25 goals and led the Crusaders in assists with 13.

Brune and teammate junior Laurel Mueller were each named to the Class 1 All-State first team. Mueller was second behind Brune in goals with 16 and also added 10 assists.

Saxony’s season ended in the Class 1 District 1 Championship where the Crusaders were defeated 4-0 by eventual state champions St. Vincent.

In fact, Brune shared Class 1 Player of the Year honors with one of St. Vincent’s players, which was junior Corin Carroll.

Welker earned Class 4 first team All-State honors following a season where she scored a career-high 34 goals and had three assists along the way.

Welker achieved this following a sophomore season where she was named second team All-State for scoring a team-high 23 goals and 14 assists.