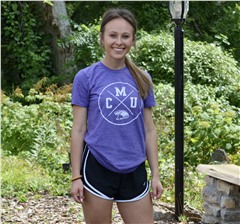 Kristen
Tarno had some of the best four years any high school athlete could ask for. As
a member of Cape Notre Dame’s girls soccer team, Tarno and the rest of the
Bulldogs 2019 class hoisted the Class 2 State Championship trophy in two of
their last three years.
The final
title came this past season for Tarno and the rest of the seniors to ride off
into the sunset as Notre Dame won the state final 4-0. However, this is not the
end for three of these soccer player’s careers including Tarno, who signed with
Central Methodist before this season.
“I had
interest in a lot of NAIA schools and a few D-II schools, but I went to Central
Methodist’s Soccer ID Camp, and I just loved that atmosphere,” Tarno said.
“They’ve been to nationals twice and it’s just such a great group of girls. I
love the coach and he’s so nice, and I love his coaching style. I just knew
that would be a great fit for me.”
Tarno’s career
started back when she was three years old since her mother, Karen, wanted
Kristen to try out multiple sports. She of course ended up “falling in love”
with soccer.
“I really
liked getting the ball, dribbling down [the field] and scoring when I was really
little — that was my favorite thing,” Tarno said. “I also liked to play
defense, too. I just like every position, and I was very competitive at a young
age. That was the most I could get out of a sport rather than cheerleading or
dancing.”
While playing
for the Southeast Missouri State Soccer Club, Tarno met and formed a chemistry
with many of her future teammates like Bailey Beussink, Megan Heisserer,
Genevieve Kulla, Julia Williams, Abby Wilson and Livia Wunderlich.
Tarno
contributes this as one of the reasons why Notre Dame won two state
championships and compiled an overall record of 86-13-2 over four seasons.
“We all
really got along — we meshed well together,” Tarno said. “We were together for
so long that we started to act like each other. Everyone just loved each other
honestly.”
Tarno wanted
to attend Notre Dame because so many of her travel teammates were going there,
and this helped her not be afraid of high school because they would all be
tackling the experience together.
As
sophomores, Tarno and the rest of her class ended up winning Notre Dame its
first state championship in girls soccer as the Bulldogs finished with only one
loss and no ties at 21-1 overall. Notre Dame defeated Springfield Catholic 3-2
in overtime to win the title that year.
“That was
insane — none of us were expecting to have that great of a year,” Tarno said.
“Halfway through we started thinking, ‘We have a chance — we have a shot of
going to state.’ When we won, I don’t think any of us have ever been that
happy.”
During Tarno’s
junior campaign, the Bulldogs suffered four losses including one in the state
championship as Christian defeated them 1-0. Tarno and the rest of her
classmates went into this season with their minds set on winning state one more
time because it would all be their final time playing on the same team together.
“I’m so sad
still because we’ve grown up together and have been around each other for so
long,” Tarno said. “We’ve made lifelong friendships that I don’t think will
ever break because of soccer. We were always together outside of the field
whether it was riding up together for the games when we were little or then on
the bus rides at Notre Dame we really just clicked and grew closer each year.”
This season,
Notre Dame finished with 26 wins, only one loss and a tie to end up capturing a
second state championship. The Bulldogs went out in commanding fashion as they
outscored opponents 24-5 during the postseason.
“[Winning
two state championships] is kind of surreal to me because it makes me so happy to
think about it,” Tarno said. “No one has been able to do that before at Notre
Dame and we were the first and got two. That’s just crazy to me.”
Along with
winning two state titles, Tarno became one of the best players in program
history statistically as she finished in the top six of three all-time, career
categories, which were points (fourth; 120), assists (fourth; 38) and goals
(sixth; 41).
Tarno scored
a career-high 16 goals and dished out 12 assists for 44 points with a shooting
percentage of 64.3 in her final season as a Bulldog. This led Tarno to being
selected to every postseason honor list in Missouri by being named second team
all-state, first team all-region, first team all-district and honorable mention
all-conference for the second time.
“I was so
happy to receive all-state because that was one of my goals going into this
season,” Tarno said. “Coach [Ryan] Schweain always has us write down goals of
what we want to accomplish each season and that was it. I feel like I worked
hard to get it, and I deserved it I think.”
One of
Tarno’s main focuses throughout her high school career has been dribbling the
ball, so she spent countless hours getting as many touches as she could before
and after practice.
Tarno will
continue to focus on dribbling at the college level because her new coaches
have told her she needs to be more confident when she does dribble during a
game. She also wants to focus on consistently bringing her “A” game as well as
staying onside in matches.
Off the
soccer field at Central Methodist, Tarno will major in nursing. At first Tarno
wanted to study psychology, but she changed her mind to nursing at the last
minute because helping people brings her great joy.
In this article: