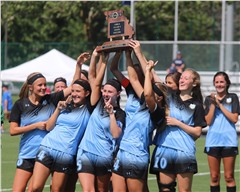 It was nearly a three-peat for the Cape Notre Dame girls soccer team, but winning two Class 2 State Championships will do just fine for the Bulldogs.

Notre Dame (26-1-1) won its second state title in the last three years by defeating Visitation Academy (18-5) 4-0 on May 30 at Swope Soccer Village in Kansas City.

Senior forward Megan Heisserer, who will be playing for Southeast Missouri State next season, scored the Bulldogs first two goals in 32 minutes. She did so after being held to only two shots on goal and no score against Pleasant Hill (24-2) in the semifinals the day before.

“It was important [to end her career like that] because she was a bit off in the semifinal game,” Notre Dame head coach Ryan Schweain said. “[After scoring two goals] we tend to settle down a little bit.”

The Bulldogs defense was another huge factor in the match as they recorded their 16th and final shutout of the year. Visitation Academy was only able to get off two shots on goal, which were each saved by sophomore goalkeeper Caroline Lochmann.

“Technically she’s a good keeper, and really not that much experience as far as Notre Dame experience coming in this year,” Coach Schweain said. “She did a fine job for us.”

In last year’s state title match against Christian, Notre Dame lost 1-0 and was without senior defender Abby Wilson, who suffered a torn ACL in the semifinals. Wilson thankfully made a return for her final year and was back in full force this season.

“Abby is kind of our linchpin in the back — she’s a fantastic defender,” Schweain said. “She’s kind of our communicator — our general in the back, and she reads the play so well. She always seems to be in the right place at the right time. She’s going to be extremely difficult to replace next year.”

While Notre Dame’s defense kept the Visitation Academy offense at bay, the Bulldogs came up with two more goals in the final 40 minutes to secure the title.

Sophomore Hannah Wilson, who assisted Heisserer on her first goal, scored in the 47th minute to make it 3-0 as senior Kristin Tarno came up with the assist.

Notre Dame’s final goal was made with two minutes left in the match as sophomore Mary Dirnberger found fellow sophomore Lindsey Bauwens for the score.

“It’s special [to have won two state championships with these seniors],” Schweain said. “It’s been a fantastic group to coach. This team was a lot of fun, and they worked really hard. Even at practice this year you could tell there was something different about this team with the amount of effort they put into training and practice.”

It was also a record-breaking season for the Bulldogs as Heisserer recorded the most goals in a single season with 54, breaking her own mark of 37 set last year. For her career, Heisserer finishes as the Bulldogs all-time leading goal scorer with 156. She is the only player in program history with more than 100.

Heisserer also recorded a program single-season 29 assists, while fellow senior Livia Wunderlich finished behind her for second most at 20. Heisserer is also the program’s all-time leader in assists with 66. Wunderlich finishes third on the list (38).

Notre Dame’s 16 shutouts is the third most in program history, thanks to Wilson, Lochmann, seniors Julia Williams, Haley Morris and juniors Emily Kellum and Maggie Eby.

This group of seniors helped lead the girls soccer program to its first-ever state championship as sophomores in 2017.