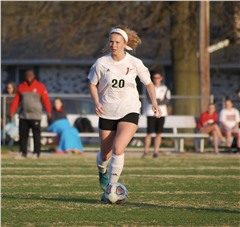 Four days after coming off its second loss of the season, the Jackson girls soccer team was able to blank Class 4 District 1 opponent Seckman 8-0 at home April 18.

Junior midfielder Mikala Liley scored a game-high three goals for the hat trick, which she was able to do so in the first half to help lead Jackson 5-0 over the Jaguars heading into the locker room.

“Saturday [April 14] was a humbling experience just from the caliber of team [we lost to],” Jackson head coach Justin McMullen said. “We know what we have to work at, and we were right there with St. Joseph’s Academy all game long. We wanted to come out today and get that taste out of our mouth and get back to our winning tradition.”

This was the same team that handed the Indians a 1-0 in the 2017 regular season, but then Jackson defeated 1-0 to win the district championship and advance to the state playoffs.

“We knew coming into the game that Seckman is always a tough opponent for us when it comes around to districts,” Jackson head coach Justin McMullen said. “We tried to establish a little bit of tempo early on. It carried on into the rest of the game.”

Liley scored the opening goal of the match in the seventh minute while Jackson was maintaining the ball for most of the first 40 minutes.

It took 10 more minutes for the Indians to put up another goal, which came from Liley once again after she stole the ball to score off a 20-plus yard kick.

“[Liley] was set up very well on all three of her goals,” McMullen said. “I think all but maybe one or two of her goals were assisted tonight, so we came out very aggressive today, and that’s what the game plan was. We’ve been playing a different formation for the last couple of games, so we kind of went back and changed some things up. It looked pretty good tonight.”

Jackson was in a 4-3-3 formation with four forwards on display as freshman Katelyn Miller was in front with seniors Grace Pehle and Lauren Welker along with junior Natalie Miller.

In the midfield it was Liley accompanied by junior Taylor Nelson and sophomore Piper Guilliams.

Defensively, junior Laura Bertrand and freshmen Grace Crowden and Kate Emmendorfer were able to keep Seckman forwards in check by only allowing a few shots on goal.

This gave junior goalkeeper Emily Hermann her eighth shutout of the season as she and Jackson’s defense has only allowed seven goals this season with no more than two per contest. Hermann now has a total of nine shutouts after Saturday’s 5-0 win over Hillsboro.

The next Indian to score a goal to make it 3-0 was Welker, who was assisted by Pehle as she brought the ball all the way from the corner area to the side of the net. Pehle then passed the ball to Welker, who placed herself in the goal area for the score.

This happened in the 25th minute of regulation, which was followed by Liley’s third goal four minutes later.

It only took Jackson 46 more seconds to add the fifth and final goal of the first half, which was put in by Miller.

It wasn’t until the 66th minute in the second half when Jackson scored another goal as Pehle was able to score off a penalty kick.

Another 11 minutes passed before the Indians scored once more, but this time it was a reserve player in freshman Olivia Ward who scored a 20-plus yard goal.

The final goal came from an unusual scorer in Bertrand in the 73rd minute to score Jackson’s eighth and final goal, which usually doesn’t happen very often for defenders.

“That’s just one of the things Coach [Caleb] Beussink and I talked about,” Coach McMullen said. “We know we have a lot of kids that can score goals, but when someone like Laura Bertrand who doesn’t get the opportunity to be able to do it — it shows she can also score goals for us.”

Before this game, Seckman suffered a 7-0 loss to Eureka, which is the team that ended Jackson’s 2017 season in the Class 4 Sectional 4-1.

Coach McMullen said he and his team doesn’t try to look at other scores to compare things, but he said he would be foolish if he didn’t look at times.

“Usually I kind of wait until the end of the year to try to start paying attention to the matchups and things like that,” McMullen said. “Potentially anything can happen come district time.

“You can always get upset, so we just try to take it one day at a time. I’ve been trying to do the same thing as a coach in preparing them everyday to be ready for the next match.”