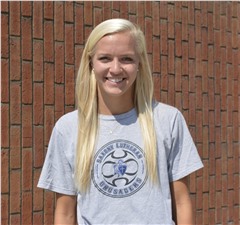 During Laurel Mueller’s time at Saxony Lutheran, she was honored athletically on multiple occasions by being named to all-conference, all-district and all-state teams as a member of the girls basketball and soccer team.

However, none of these are the 2018 graduate’s favorite recognition. That honor came on June 28 when she was named to the United Soccer Coaches Scholar All-America team.

Another reason this is Mueller’s favorite accomplishment is because this is an honor she can carry throughout college and the career she pursues.

Mueller was named to the list following a senior year where she earned Class 1 first team All-State honors for a second-consecutive year and recorded a grade point average of 3.99.

Mueller was the only player from Missouri on the boys or girls list, and she also became the first student in Saxony history to earn the honor.

“First of all, Laurel is more than just a decent soccer player — she’s a very, very talented soccer player,” Saxony girls soccer head coach Chris Crawford said. “The list of things she’s involved in and how she’s kept her priorities straight and has gotten excellent grades and a super-high ACT score — it just speaks what type of person she is.”

Mueller will be attending the University of Kentucky where she will be studying biology on the pre-medical track. The University of Alabama was Mueller’s first choice, but once she toured Kentucky she fell in love with the campus and city.

“I’ve always leaned towards the med field and everything like that,” Mueller said. “When my brother went off to med school and came home with all the ideas of what they learn there and what he’s going to be doing sparked a bigger interest for me.”

Even though Mueller was quite the athlete in high school, her goal all along was to go to a big-state university as only a student. Mueller’s tuition will be paid for through a competitive scholarship she applied for.

During one of the soccer team’s final practices, Coach Crawford gave Mueller a piece of paper to fill out to see if she could earn the honor, but she didn’t think much of it at first since it was “a national thing.”

Mueller was surprised when she received the email stating she had been named to the list, but the recognition put all of her hard work at Saxony in perspective.

Mueller admitted maintaining a high GPA as well as being a successful athlete were hard things to do, but it was something she adjusted to quickly. She was also a member of Saxony’s volleyball team, so being a three-sport athlete all four years of high school helped her get used to the “go, go, go” way of doing things.

“I come from a good educational background,” Mueller said. “Going to St. Paul prepared me well for high school, and then I go to a high school where all my teachers care about how well I do just as much as I do. Them having my back helped a lot.”

Looking ahead to next season, Crawford said he will not try to replace Mueller, because she is simply an irreplaceable player and leader.

Crawford described her as a quiet leader, who demonstrates by example with hard work in practice, workouts and on the playing field.

“It’s going to be weird filling up a lineup card without her on it,” Crawford said. “It’s a huge hole that we’re going to have to replace, but like I said we can’t do it with one person.

“It’s going to take a lot of people to try and replace what she gives us on a daily basis in practice and in games as a leader. She might not talk all the time and say things, but I think the girls felt comfortable going to her.”

Crawford continued to describe Mueller as like having another assistant coach since he could ask her about certain situations and why they were happening.

The girls basketball team was able to reach the state championship game when Mueller was a sophomore, but she didn’t see much playing time on varsity since the team was senior heavy.

There were questions surrounding if both teams could have continued success, which taught Mueller and her teammates how to step up to the plate.

“More emphasis was put on me and how I’m going to contribute, so it definitely made me step up as a leader,” Mueller said. “It made me realize how much I’m going to have to work in order to accomplish this. That’s something I’m going to take with me for the rest of my life — how to work hard.”

Mueller and fellow members of her senior class, Addison Beussink, Courtney Kester and Masyn McWilliams, all realized the difficulties they were going to face, so they figured out they would have to work together in order to accomplish their goals.

She earned Class 3 All-State, all-district and SEMO Conference honors as a junior, while making the all-district team once again as a senior.

Mueller earned all-state and all-region honors all four years as a member of the soccer team, but the Crusaders failed to get past the district title game her final two seasons as they fell to eventual state champions St. Vincent.

Mueller said what she will miss the most about Saxony is playing sports as well as the relationships she made with coaches like Crawford and girls basketball head coach Sam Sides.

The first sport Mueller played was soccer when she was only four-years-old and eventually started playing basketball too, which actually became her favorite sport.

Mueller said she didn’t even plan on playing soccer when she reached high school, but her family was able to talk her into continuing her soccer career.

Mueller is glad in retrospective because she now walks away from Saxony claiming soccer to be her favorite sport. This is because of the mental challenges the game brings.