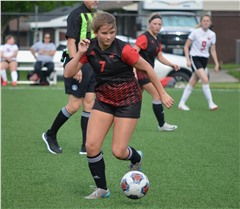 After reaching the Final Four for the first time in program history last year, the Jackson girls soccer team’s 2019 season came to an end last week in the Class 4 Sectionals.

The Indians (17-3) were able to host this year’s sectional, but they couldn’t prevent Lindbergh (16-8) from winning the game during overtime in the 86th minute.

It was Flyers freshman midfielder Morgan Goodrich who came up with the game-winning goal to send her team to the quarterfinals.

Jackson made sure it wasn’t one of the team’s forwards, thanks to defenders like seniors Laura Bertrand and Taylor Nelson, junior Cameron Pieper and sophomore Kate Emmendorfer.

“I thought early on Lindbergh had a really good game plan,” Jackson head coach Justin McMullen said. “I felt like at halftime we came out with a lot more energy. I was really proud of the way they kind of turned around and got the equalizing goal there pretty early.”

Lindbergh scored the first goal of the match, which came in the 14th minute by senior forward Julie Bauden-distel from junior forward Maura Haegele.

“That goal was one of those things where we came over and doubled, but they got a cross [pass] off, and it went their way,” McMullen said. “All year long we only allowed eight goals. Our defense has been our stamp, and once again tonight they were on display. They did a really good job of eliminating Lindbergh’s chances.”

Baudendistel did not have another shot on the goal as Nelson defended her one-on-one for the most of the remainder of the match. The Indians defense held the Flyers scoreless for the next 72 minutes, which allowed a tie in the second half.

This came when senior midfielder Mikala Liley booted a ball that collided with Goodrich’s face. The ball then went to the right of the goal for sophomore forward Katelyn Miller to score what would be the Indians final goal of the season four minutes after halftime.

“That was just one of those things again kind of like their goal, where we were able to knock the ball across and got it in,” Coach McMullen said. “We made the play and scored a goal.”

Jackson was able to get a few more shots on goal in the final 40 minutes, with one coming from a corner kick and the other a free kick, which were ultimately saved by Lindbergh’s freshman goalie Gabriella Becker.

Another key for the Flyers victory was the performance of their defense that rarely had to force a double team of Jackson’s forwards.

Indians senior forward Natalie Miller was also having to deal with a bone bruise she suffered in the district championship against Northwest, which she was able to overcome to score the game-winning goal in that contest.

Miller still finished with several shots on goal and was the team’s primary corner kicker against Lindbergh.

“I feel like this group of seniors — they were great leaders, and that’s what we just talked about,” Coach McMullen said. “They showed good leadership and had positive energy all year long. That group of six right there is the ones that you want to say, ‘Hey, that’s how you be a leader.’ We grinded out and they never complained.”