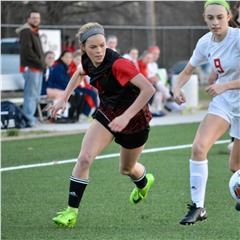 For the past three seasons, the Jackson girls soccer team has been able to win the Class 4 District 1 Championship and even reached the final four for the first time in program history two years ago.

The Indians 2019 season ended in overtime of the sectional round and graduated starters like forward Natalie Miller, midfielder Mikala Liley, defenders Laura Bertrand and Taylor Nelson along with goalkeeper Emily Hermann.

Defensively, Jackson recorded a total of 15 shutouts out of 20 games and only allowed a total of nine goals last season. The Indians managed to hold opponents scoreless for 10 games in a row during April.

“We’ve had to put a couple different situations that we’ve had to do because we don’t have a Mik Liley out there that’s able to head every ball that comes within a 20-mile radius,” Jackson head coach Justin McMullen joked. “The leadership from those players is hard to replace, and their soccer background. All of those kids played a lot of soccer.”

One of the situations Coach McMullen has had his team focus on are free kicks off corner shots on both the offensive and defensive side. He also said this year’s team probably won’t be able to score as many goals off corner kicks like they were able to in previous seasons.

The Indians were able to score a goal in every single game played last year and came up with 76 as Miller and Liley finished with 24 and 20, respectively.

Only one other player for Jackson scored 10 or more goals, which is Natalie’s younger sister and returning starting forward junior Katelyn Miller. Miller paced her older sister and Liley with 17 goals of her own, while tying Natalie for the second-most assists at 10 (Liley had a team-high 17).

“[Katelyn] is really, really fresh, and I’ve seen some really good things out of her in practice,” McMullen said. “We’re looking forward to her leading the charge on the offensive end.”

Coach McMullen will be calling on one of Jackson’s two freshman listed on this year’s varsity roster to contribute as a scorer in mid-fielder Justi Nelson, who is the younger sister of Taylor and daughter of Southeast Missouri State’s five-time Ohio Valley Conference Coach of the Year Heather Nelson.

“Justi comes in as a freshman that’s going to be really exciting,” McMullen said. “I think you guys are going to see some things out of her that are going to remind you of some players we’ve had in the past. She’s played with the St. Louis Scott Gallagher club, which is the highest team that we have in the St. Louis area.

“She’s played a lot of soccer these last several months, but she’s really quick. She’s probably the quickest that I’ve had out of the Nelson [sisters], and as far as her feet — she has really good ball control. Probably the smallest [Nelson], but she knows her soccer.”

Along with Taylor and now Justi, McMullen was also able to coach their older sister Jordan, who played collegiately for SEMO and helped guide the Redhawks to win their first OVC regular-season championship in five years this past fall.

As for Miller, she is a member of a junior class McMullen is expecting big things from as it also includes players like defenders Grace Crowden, Kate Emmendorfer, midfielder Ivy Guilliams and utility Olivia Ward.

Guilliams is a player McMullen hopes can make the biggest leap from her sophomore to junior season, who only scored one point with an assist last season but played in crucial moments.

“Ivy Guilliams is the one that’s probably for us in our preseason program who has surprised us the most,” Coach McMullen said. “She’s taken some leaps as far as this past season to where she is now. Ivy is definitely a player to look out for.”

Coach McMullen hopes players like Ward and sophomores Abbey Klund and Caroline Rivenburgh can be versatile and play several different positions this season. McMullen emphasized he needs players to be versatile after losing the senior class Jackson did.

Klund and Ward were able to finish in the top-five scoring as Klund recorded three goals and one assist (seven points), while Ward dished out four assists and added two goals (eight).

Another key returning starter for Jackson will be senior defender Cammie Pieper, who signed with Culver-Stockton last month to continue her career at the next level. Pieper transferred from Ft. Zumwalt North last season and became an instant impact player on Jackson’s defense.

“Cammie is going to be back there to anchor our defense along with Kate Emmendorfer,” McMullen said. “We’ve definitely got to have those kids on top of their game because we’re going to have two new starters back there.”

Another key senior for Jackson this season will be none other than Piper Guilliams, who has played and started for the Indians throughout her entire career. Guilliams will be a player McMullen leans on this season since she has personally experienced all of the program’s recent success.

Another Indian returning who saw playing time back when Jackson reached state is Crowden, who suffered a season-ending injury last spring. “She was a huge loss last year, but she’s worked really hard and will be back [before the regular season starts]. We’re looking forward to her being back,” McMullen said.

Entering her first year as a starter will be sophomore goalkeeper Brooke Gerau, who was able to see playing time while filling in for Hermann as a freshman. Also seeing more time on defense will be fellow underclassmen sophomore Emma Shields and freshman Maci Wendel.