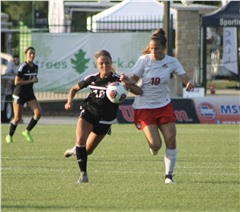 There is a first time for everything, and for the first time in program history, the Jackson girls soccer team reached the state final four.

Jackson ended up placing fourth overall after losing to Park Hill 1-0 in overtime of the semifinals Friday, June 1, and lastly to Eureka 4-0 in the third-place match Saturday, June 2.

“I’m just proud of our girls — I’m proud of the support in our community, and I’m proud of our school,” Jackson head coach Justin McMullen said. “It’s a moment right now where you are just proud. As a coach, you haven’t had the chance to reflect on everything yet, but the one thing that comes to mind is being proud of everything we’ve done this season.”

In the Class 4 Semifinal against eventual state champions Park Hill, neither team scored a goal in the first 80 minutes of regulation.

Jackson was outshot in shots on goal 7-3 as the Indians were unable to control the ball offensively for the majority of the match.

When Jackson did have possession, the team had trouble getting shots off, but senior forward Lauren Welker made several late pushes and was able to get one shot off in the 70th minute.

Having a team-high two shots on goal was junior midfielder Mikala “Mik” Liley, who also played on defense in both contests.

Liley finished with a total of four shots on goal out of Jackson’s six total in the final four.

The game headed into sudden victory where Hermann recorded two more saves within the first four minutes of overtime.

In the 85th minute, sophomore forward Alyssa Ramos managed to get one past Hermann to land the Trojans into the state title game.

“[The semifinal] was a tough, emotional game,” Coach McMullen said. “Our first trip here we had lots of emotions. I thought we actually played better [in the third-place game] and kind of bounced back from that game. I told the girls at halftime [against Eureka], ‘You’re here for a reason. You deserve to be here.’”

Hermann recorded three saves against Eureka but allowed four goals with the first coming off a deflected shot that went in the direction of sophomore Audrey Brown. Brown had a wide-open shot on goal and capitalized to give the Wildcats a 1-0 lead in the 36th minute.

“Emily came up big for us [in both games],” Coach McMullen said. “She hasn’t had to face a lot of difficulty all season long, but when she has faced [difficult shots] she’s rose to the occasion.”

Jackson was also outshot in shots on goal 7-3 against Eureka as McMullen said his team had to face the best defender it has played in the last two years. He was speaking of the reigning Class 4 Defensive Player of the Year senior Hayley Jakovich.

The Indians have faced Eureka and Jakovich once before, which was in last year’s sectional match. Jackson fell to Eureka 4-1 en route to its second-ever state title.

“We knew coming in this year that she was even better, but she’s definitely the catalyst back there and makes it very difficult to get some quality looks,” McMullen said. “Their goalkeeper was in the right spot when she needed to be as well, but Eureka has been that way all year long — they’ve been hard to score on.”

Jackson ended up allowing three more goals in the second half whereas the Indians only recorded two shots on goal. The first was from junior Natalie Miller in the 58th minute and the final by Liley in the 70th off a midfield pass from junior Taylor Nelson.

It wasn’t an easy road for the Indians to reach state, who were able to avenge a 1-0 loss in the regular season to Northwest. Jackson did so by defeating the Lions 1-0 for the Class 5 District 1 Championship on May 16.

This put Jackson in the state playoffs for a second-straight year, but the team hadn’t won a sectional match in 15 years.

Jackson ended the drought by defeating Hazelwood Central 7-0 on the road May 22, a victory that sent them to the quarterfinals to host Ft. Zumwalt West four days later.

It took the Indians 12 minutes to score their first goal of the game when Welker sent a cross pass to freshman Katelyn Miller to take a 1-0 lead.

Jackson’s second goal came off another cross pass from senior to freshman, but this time it was senior Grace Pehle finding freshman Ivy Guilliams for the goal six minutes later.

It remained a 2-0 game after the first 40 minutes of play heading into halftime, but the Jaguars scored off a penalty kick in the 45th minute to narrow Jackson’s lead.

The Indians were able to regain a two-goal lead one minute later as Miller scored her second goal of the game.

Natalie Miller added to Jackson’s scoring total when Liley kicked the ball from the opposite side of the field, which deflected off of a West defender. This allowed Miller to go one-on-one with the goalie for the score to give Jackson a 4-1 lead with 20 minutes remaining.

The Indians ended up allowing two more goals, the final off a penalty kick with 30 seconds remaining, but they held on for the 4-3 win to advance to state.

“I can’t really even put [the feeling of reaching state] into words,” Welker said following the win. “Our team just really played so well together. We had some freshman really step up in this game, and we all played really well even with the heat and the pressure we had on us.”

Hermann didn’t have to defend as many shots on goal as she had to against the Jaguars because of the quality of play by the defense in front of her led by junior Laura Bertrand.

“I’m happy to step up when [my defense] allows me to,” Hermann said after quarter-finals. “It’s really crazy because it was such a high-scoring game, and you had to keep your head up mentally. I’m just really proud of this game.”