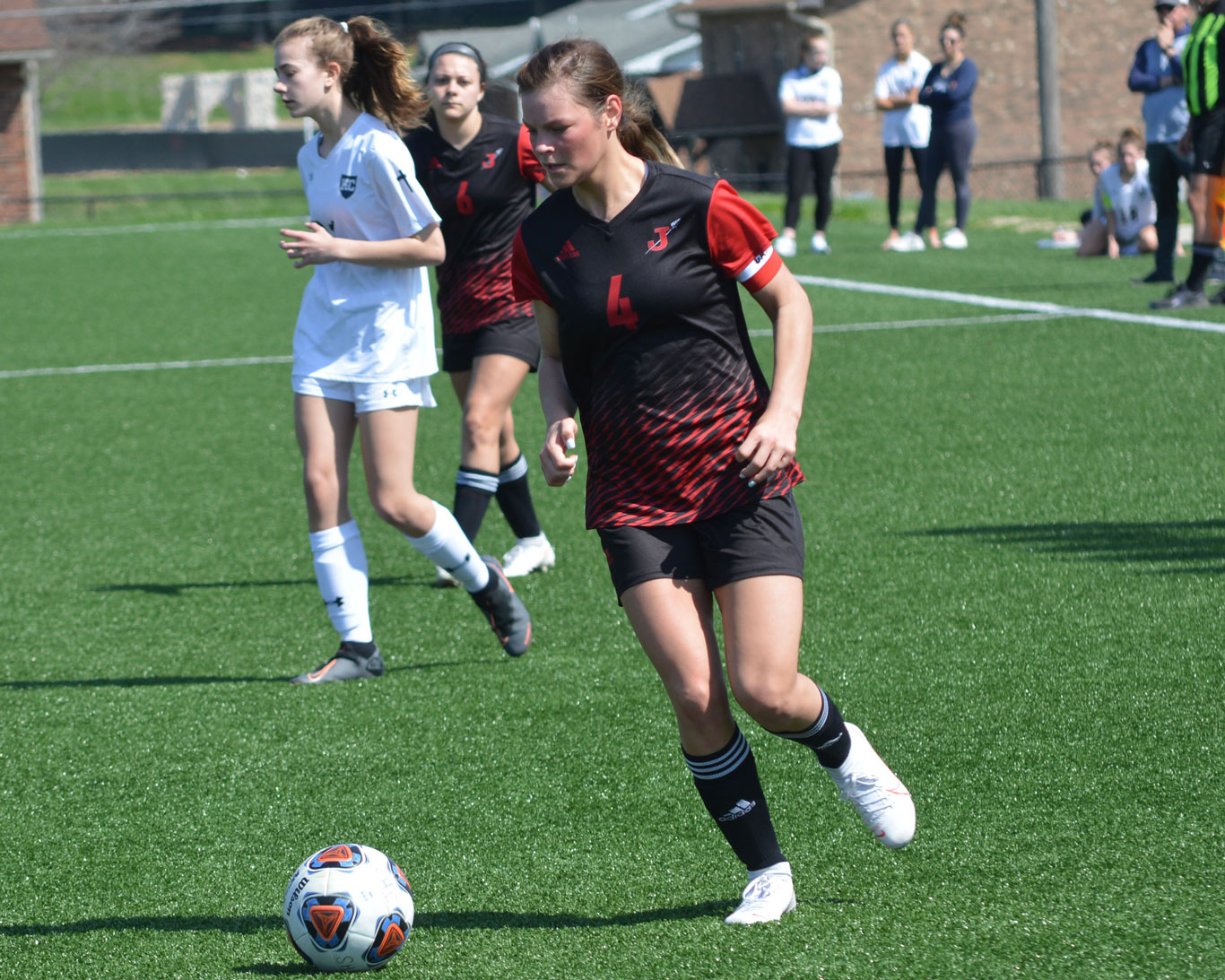 For the first time since May 21, 2019 (676 days), the Jackson girls soccer team was able to host an official home game after all of last season was cancelled due to the coronavirus pandemic. The Indians certainly didn’t disappoint their home crowd in the team’s Shootout Showcase as they beat Helias Catholic and Marquette by scores of 7-0 and 1-0, respectively, Saturday.

“I’m really happy with our effort,” Jackson head coach Justin McMullen said. “We showed a lot of character and poise when things got a little rough in the second half of the second game. To have two shutouts against two opponents like that speaks highly of our team as a whole.

“I thought we played extremely well on the defensive side. In the first game, we showed our offensive outburst, but take your hat off to Marquette. That’s as good of a team you’re going to get early on in the season.”

Along with recording its second and third-straight shutout of the season, Jackson had six different players score a goal in the two wins as senior forward Katelyn Miller scored three against the Crusaders for a hat trick. One of Miller’s goal came off an assist by fellow Southeast Missouri State signee senior midfielder Grace Crowden, who also scored a goal in the win over Helias Catholic.

“Big players rise to big-time games, and those two showed that,” McMullen said. “I thought our leadership and communication out there was really well, and I think a lot of that stems from your upperclassmen. It starts to rub off on the younger ones. Obviously when you have two Division-I caliber players, you’re going to get some production out of them for sure.”

The other Indians that scored a goal in the showcase was defender Olivia Ward, junior defender Caroline Rivenburgh, and sophomores midfielder Justi Nelson and defender Maci Wendel.

On top of her goal, Nelson also dished out an assist to Miller in the 55th minute of the match versus Helias. Three minutes later is when Nelson scored her first and lone goal of the weekend to give Jackson a 6-0 lead.

“[Nelson] is one of our players that’s pretty banged up right now, so we’re trying as best as we can to minimize her minutes,” Coach McMullen said. “[Junior forward] Abbey Klund is another one in that situation.

“Those kids will get healthy, and I thought [senior] Ivy Guilliams had a good weekend. She went into a position she’s capable of playing, but it’s a little bit new. She did a really good job defensively. Justi made a lot of good plays just retaining possession and not giving the ball away.”

Rivenburgh came up with Jackson’s lone goal in its one-score win over Marquette, which came in the 19th minute of the match from 25-plus yards out off her left foot. Indians head coach Justin McMullen wants his offense to be diverse this year, so he will continue to have defenders like Rivenburgh, Wendel and Ward contribute scoring wise.

“[Rivenburgh’s goal] was one of those things where I think she surprised herself,” Coach McMullen laughed. “Good things happen when you shoot, and we wanted some production from our defenders. The way we’re set up in our system, we like a lot of attacking ability from our defenders. I’ve been really pleased with that early on so far.”

One of the ways Jackson attacks opposing defenses is bringing up a defender like Wendel to play as an outside forward whenever the Indians are going up field. Coach McMullen said this early on in the year, he wants to try different things to see where his team’s strengths are.

Even though a defender like Jackson senior Kate Emmendorfer, who is the leader of Jackson’s backline, didn’t score a goal, she contributed to both victories by winning 50-50 balls and keeping ball carriers in front of her as much as possible.

Despite Emmendorfer and the rest of her team’s efforts defensively, Marquette was still able to get seven shots on goal during the match, but Jackson’s junior goalkeeper Brooke Gerau didn’t allow the ball to reach the back of the net.

“It’s very difficult to go through 15 minutes of withstanding the pressure that they were bringing toward us,” McMullen said. “A lot of corner kicks at the end of the game right there that I was a little bit nervous at times about, but I thought we played with a lot of poise in pressure-packed situations.

“You want to see what you have early against a team like Marquette, and they have a lot of quality on the field. That game right there was back and forth, but it shows a lot for us early going on and what we’re capable of. We’re a little banged up, so once we get healthy I’m hoping we’ll look even better.”

Gerau, who has only allowed two goals through four games this season, recorded seven saves in the win over the Mustangs with five coming in the second half. This was after a match where the Indians defense didn’t allow Helias Catholic to record one shot on goal.

“I have the utmost confidence in [Gerau], but there were a couple of saves she surprised me on that she held in her hands,” Coach McMullen said. “There was one in the first half and one in the second half where she looked really sharp. I’m really happy with the way Brooke has played so far this year.”

Jackson [3-1] is on a three-game winning streak after suffering a 2-1 overtime loss by the hands of Parkway West. Prior to the showcase, the Indians defeated SEMO Conference opponent Kelly handedly at 8-0.

Crowden recorded a hat trick with three goals in the win over the Hawks, while Nelson paced her with two of her own. Emmendorfer, Rivenburgh and senior forward Brooke Thompson scored the other three goals.

“We’re pretty relentless,” Coach McMullen said. “I’m really happy with where we are as far as our team chemistry right now.”