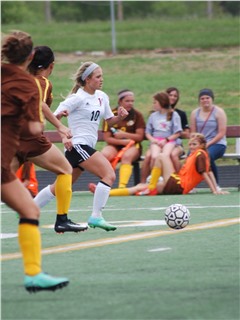 It has been two years since the Jackson girls soccer team has won the Class 4 District 1 Championship.

This season, the Indians are seeded No. 2 overall thanks to a 1-0 loss to No. 1 seed and host Seckman April 19 on the road in Imperial, Missouri.

“Actually, it’s funny because Northwest just defeated Seckman [Thursday, May 11] 4-3, so this district is wide open,” Head coach Justin McMullen said. “Everybody has kind of beat everybody — Poplar Bluff hasn’t played everyone, but they’ve got some talent down there as well.”

The Indians have yet to play Poplar Bluff this season, but they did host Northwest on senior night April 27 for a 3-1 win over the Lions.

Jackson will be facing Northwest, the team that ended the Indians season last year in the district championship, in the first round of the district tournament on Tuesday, May 16, to see which team advances to the title game.

The winner of this game will face either Seckman or Poplar Bluff Thursday, April 18, for the Class 4 District 1 Championship and a spot in the Class 4 State Sectionals.

Heading into postseason play, Coach McMullen is having his players focus on one team, and that is Jackson.

“I think the key for us, and we’ve talked about it, is we’re going to focus on Jackson as individuals and as a team,” Coach McMullen said. “The coaches will make the adjustments for each team, but I think overall we are definitely prepared for any one of those three teams. We’re just going to go in [the district tournament] with a work-hard attitude, and I think the results will be positive.”

Coach McMullen said the game against Northwest is the first step in the rest of the six games left in the season because he said the key for the team is to not look back on what it has done in the regular season.

Jackson finished the regular season in remarkable fashion by winning five-straight games after losing three in a row with two of those losses for tournament championships.

The Indians scored four goals in their last two regular-season games, thanks to junior Lauren Welker, who had a hat trick in each contest to bring her season total of goals scored to a career and team-high 32.

“[Welker’s] teammates are putting her in very good scoring opportunities, and she’s capitalizing on it,” Coach McMullen said. “It definitely starts with her teammates getting her into the right situations, but she’s definitely made some individual plays that have come up big in some goal-scoring situations as well.”

Senior Randa Norman and junior Grace Pehle have been serving Welker the ball for most of her goals with a combined 22 assists with Pehle having a team-high 13.

“I think we’re starting to play our best soccer right now, and it’s the time of the year you certainly want to be doing that,” Coach McMullen said. “Hopefully that is going to carry over to [the district tournament].”