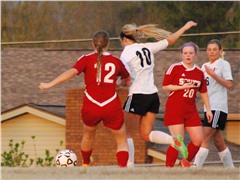 After defeating Saxony Lutheran 5-0 in the semifinal round of the Noon Optimist Tournament on Friday, March 24, the Jackson girls soccer team hosted the Crusaders four days later.

This game ended with the same result, and the one difference was one goal as Jackson defeated Saxony 6-0 to advance to 4-0 overall.

“Even though the score doesn’t say so, hats off to Saxony,” Coach McMullen said. “In both games that we’ve played them, they have played extremely hard, and [Saxony head coach Chris Crawford] has some good talent there. They are young, and they are going to be a force to be reckoned with in their class. You’ll be hearing about Saxony at the end of the year.”

Jackson’s leader in goals, junior Lauren Welker, had her first hat trick of the season in the first meeting. Welker continued that success by scoring three goals yet again in this one.

“Lauren does well for us, but we can score in lots of different areas, too, as the scoreboard and season has shown,” Coach McMullen said. “Lauren is definitely a very talented [player], but she will be the first one that doesn’t take credit, and she will give it to her teammates. That’s just what type of [player] she is.”

Welker scored her first goal of the game with a headshot after senior Nikki Sotak sent the ball to her off a free kick to put Jackson up 1-0 in the 14th minute.

It only took eight more minutes for Welker to find the goal once again for her second goal of the game as she was assisted by the team’s leader in assists, senior Randa Norman who has four thus far this season.

Scoring the third and final goal of the first half for Jackson with l5 minutes left in the half was not Welker, but sophomore Taylor Nelson.

This unassisted goal to give Jackson a 3-0 lead over Saxony was Nelson’s first of the year, which also forced Crusaders head coach Chris Crawford to make a change at goalkeeper.

Starting for Saxony at goalie was junior Ashley Fristche, who had five saves throughout the first half, but allowed three goals to a possession-heavy Jackson offense.

Replacing Fristche to protect the goal for Saxony was freshman Sam Schnabel, who had finished the game with five saves and kept Jackson scoreless for the remainder of the first half.

However, coming out of halftime it only took Jackson three minutes to score its fourth goal in the game, which came from junior Grace Pehle for her first goal of the year.

Welker completed her second-straight hat trick five minutes later in the 49-minute mark following a steal off a throw in by Saxony for an unassisted goal.

Leading Saxony 5-0, Jackson’s defense only allowed a handful of shots on goal from the Crusaders to keep it a scoreless game yet again for Saxony.

Another reason Saxony did not have many shots on Jackson’s goal was because of how much the Indians possessed the ball.

“We’ve been doing a good job of keeping possession, and that is opening up a lot of things for us,” Coach McMullen said. “We are creating a lot of opportunities just by keeping possession of the ball, and we are able to find each other in open space.”

Scoring the final goal of the game with just nine minutes remaining in regulation was senior Sarah Gammon to give Jackson the 6-0 lead to close the game.

Following this match against Saxony, Jackson hosted Parkway South the very next day. The Indians were able to add another win to their record in a 1-0 overtime win with sophomore Natalie Miller scoring the game winner.

Miller is second in Jackson in goals with nine behind Welker, who has scored 10 to date. Miller was also the only Indian to score in the next game, which was against Westminster Christian Academy on the road in the team’s first loss of the season at 3-1.

Jackson traveled to Illinois for its next game to face Belleville West where the Indians won 4-0 and is now 6-1 overall thanks to Miller scoring a game-high two goals.