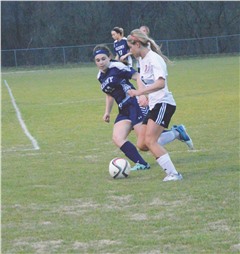 The Jackson girls soccer team has started its season in usual fashion by going undefeated at 3-0, and also, the Indians will be playing for the Noon Optimist Tournament Championship.

The Indians would have already played for the tournament title against Cape Notre Dame (4-0) this past weekend on Saturday, March 25, but the game was canceled due to weather.

The game has yet to be rescheduled, but with the teams having a regular-season game against each other on April 3, the championship may be put on the line in that game, according to Jackson Head Coach Justin McMullen.

Coach McMullen, who is in his eighth year at the helm with Jackson, is “really impressed” with how his team has started this season by scoring 16 goals and only allowing one.

Coach McMullen said one of the key reasons why Jackson’s defense is playing so well this season is four-year starting goalkeeper senior Sam Schnicker.

“We’ve got a lot of experience in the back,” Coach McMullen said. “Three of my seniors are defenders there. Nikki Sotak, Rylee Stafford and Sarah Gammon — they have been really good leaders back there for us, and a lot of them have been starting since they were freshman.”

Leading Jackson offensively with a team-high six goals is junior Lauren Welker, who has scored two goals in each game the Indians have played.

Right behind Welker with five goals is sophomore Natalie Miller, who was a starter for Jackson last year as a freshman scoring 10 goals and had three assists as well.

“[Miller] works really hard — she’s kind of a different player than what Lauren does,” Coach McMullen said. “Natalie is very, very aggressive, and she will lay her body out there on the line. She comes up with a lot of those loose balls, and she has a knack for scoring.”

Miller led Jackson with five goals before the team faced Saxony Lutheran in the semifinal round of the Noon Optimist Tournament after scoring four in an 8-1 win against crosstown rival Cape Central in the quarterfinals.

Miller failed to score a goal in the game against Saxony where Jackson defeated the Crusaders 5-0, but did have an assist to Welker on one of her two goals in the game.

Welker led the Indians in scoring last season with 23 goals and 14 assists, which led to her being named to the Class 4 All-State second team.

“Lauren [Welker] has played the most soccer on our team,” Coach McMullen said. “She plays on the St. Louis Scott Gallagher team, who went undefeated this year actually. She brings in a lot of experience for us, and she is just a great player to have on the team. She is very unselfish, very humble, and she is just a joy to coach. She makes everybody around her better.”

With waiting to see when the tournament championship will be played, which Jackson has won the last two seasons, the Indians will again face Saxony Tuesday, March 28.

The Indians will then host Parkway South on Wednesday before heading to St. Louis to face Westminster Christian Academy Friday and Belleville West Saturday.